Murmansk, a regional centre on Russia’s far northern Kola Peninsula, wants to take part in a US initiative seeking project candidates to reduce emissions of black carbon in Arctic regions. Murmansk has specific ideas of what could be done and needs the Americans’ help to realise them.

Published on October 24, 2011 by Anna Kireeva, translated by Maria Kaminskaya 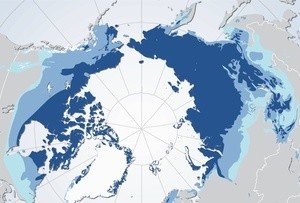 In mid-October, the US Environmental Protection Agency (EPA) held a seminar in Murmansk to discuss ways to assess emissions of black carbon in the Arctic and measures to reduce them.

Black carbon aerosol is, essentially, soot – a dangerous pollutant produced through incomplete combustion of biomass and fossil fuels. Coming mostly from regions in Northern Eurasia and North America, emissions of black carbon end up in the Arctic atmosphere and then settle on the immaculate Arctic snow and ice, creating a barely perceptible layer of dirt that nonetheless speeds up thawing considerably.

Though it is a short-lived pollutant – it does not remain in the atmosphere for very long, compared to better-known pollutants such as carbon dioxide – black carbon, recent estimates say, accounts for as much as 30 percent of Arctic warming to date.

Scientists worldwide have in the recent years directed their efforts at identifying black emission sources, the pollutant’s air transport routes and impact, and ways to reduce the emissions. The US is now looking to support specific projects to counter black carbon pollution in the Arctic.

“This is a Russian-American project aimed at assessing the scope of black carbon emissions and their impact on Arctic regions, as well as implementing pilot projects to reduce such emissions. The Americans will be doing the assessments and the financing,” said Yury Nedre, general director of the St. Petersburg-based Scientific Research Institute for Atmospheric Air Protection.

Nedre said the Americans have announced a tender for such projects in a number of Arctic regions and are now studying the local situations and examining project proposals.

Black carbon pollution and ways to curb the damage

A few years ago scientists first noticed a strange haze shrouding the Arctic in a cloud of mysterious smog – created, as was established, by aerosols containing heavy concentrations of particles of soot. These could only come with air currents travelling from other regions. The disturbing phenomenon that was dubbed the “Arctic haze” – layers of air-borne pollutants that tint the Arctic’s lower atmosphere in the late winter and early spring – was first registered by scientists working with international US, Canadian, and Norwegian research centres. In 2008, a first report appeared on the subject, completed as part of the Arctic Monitoring and Assessment Programme (AMAP) of the Arctic Council.

After years of studies, scientists have identified black carbon as one of the worst enemies of the vulnerable Arctic ecosystem. When they settle on the ice and snow cover in the Arctic, black carbon particles cause accelerated thawing as the surfaces’ capacity to reflect solar radiation is reduced and heat absorption increases. Furthermore, black carbon is a cancerogenic and toxic pollutant capable of causing severe illnesses.

A considerable part of black carbon pollution in the Arctic comes from wildfires and agricultural burning – fires intended to remove crop residues for new planting or clear brush for grazing. Burning fossil fuels in industrial regions in Europe and North America also accounts for a major part of the resulting damage to the Arctic climate.

Scientists are now suggesting technologies to curb both emissions of black carbon and those of other harmful pollutants, such as sulphates and particulate matter. To promote those ends, the Americans have, for instance, come up with special filter technologies that can trap solid particulates in diesel plants. Ways to popularise the use of fuels with low sulphur content are also considered. According to studies done in the US, not only does a transition to low-sulphur fuels benefit the environment by reducing dangerous emissions, but it offers a very cost-effective solution as well, as it cuts costs incurred by engine maintenance.

The Russians suggest these technologies  could be effectively introduced in Russia’s north – primarily, at state-owned enterprises. But they are also proposing to involve local businesses in the projects, starting with companies that run city bus fleets.

What could the Murmansk Region do?

In Murmansk Region, the old diesel-fuelled public transport fleets are responsible for a major part of the region’s contribution to the disturbing Arctic pollution problem. Emissions from these and other diesel-driven vehicles, as well as from diesel-based power stations running in local villages and settlements and diesel engines operated on vessels calling into the port of Murmansk, make the bulk of black carbon emissions in Murmansk Region.

In his presentation of the environmental issues of Murmansk Region, Alexei Smirnov, deputy chair of the regional Committee for Industrial Development, Ecology, and Use of Natural Resources, spoke in detail about the main problems associated with atmospheric pollution.

Control and monitoring of air quality is the responsibility of the regional branch of a federal agency called Rosgidromet, or the Federal Service for Hydrometeorology and Environmental Monitoring, which operates under the Ministry of Natural Resources and Environmental Protection. Eighteen permanent stations are set up in the region where air samples that are studied to estimate atmospheric pollution levels are taken three or four times a day, Smirnov said. Over 80,000 such samples were collected in Murmansk Region in 2010.

According to Smirnov, the region’s most polluted cities are Kandalaksha, Nickel, Murmansk, Monchegorsk, and Zapolyarny. In these areas, pollutant content exceeds maximum allowable concentrations, Smirnov said.

Industrial pollution on the Kola Peninsula has been a long-standing cause of worry for environmental organisations, including Bellona. Of particular concern are the operations of the nickel and palladium mining and smelting company Norilsk Nickel. This metallurgical giant’s smelting enterprises in Russia’s north are deemed responsible for high concentrations of sulphur dioxide and heavy metals that settle in groundwater, rivers, and lakes and are transported by air – including to neighbouring Norway – resulting in lower life expectancy among populations residing in nearby areas and higher incidence rates of such illnesses as respiratory disease. Bellona has long insisted that Norilsk Nickel’s environmental safety record is an issue of serious concern and urgent measures to remedy the situation are called for.

According to Smirnov, an increasing source of pollutants that affect the quality of air in Murmansk Region is the local transport industry, with the growing fleets of road vehicles being the main factor behind the rising pollution levels.

As he examined the shares of stationary and mobile pollution sources in the overall pollution levels, Smirnov noted that black carbon emissions from mobile sources have grown multiple times. He said, furthermore, that there is a lack of exact pollution data since it is the polluting companies themselves that such information is routinely made available from.

“As a proposal for the American partners, I would recommend the city of Murmansk as the place to implement black carbon emission reduction projects,” Smirnov said at the close of the seminar.

He said all conditions and requirements to satisfy such a project’s goals were found in Murmansk: It is an Arctic city, it does have air pollution problems that need tackling – there is no lack of complaints from the population regarding air quality in the city – and the municipal authorities are willing and ready to start the work.