Bellona, Norges Naturvernforbund (Norwegian Society for the Conservation of Nature), and the Norwegian Nature and Youth urge Norway’s northerly Finnmark county leaders and all municipal politicians in South Varanger municipality to oppose plans to increase production – and the resulting risk of growing pollution – at the Norilsk Nickel smelting works, just across the border in Russia.

Published on September 2, 2011 by Bellona, translated by Charles Digges 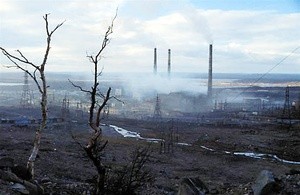 These Norwegian environmental groups have sent an open letter to leaders in Finnmark and South Varanger. Below is the English translation of that letter:

The result of that late 1980s campaign was the allocation by Norway in 1991 of 300 million NOK ($55.5 million) toward clean up efforts, with the goal of reducing emissions from the metal smelting plant by 90 percent. Twenty years later, there is still no emissions purification system in place.

Very soon, Norway will hold its municipal and county elections, but none of the contenting parties in Finnmark mention the pollution issue in their campaign stances.

Bellona, ​​Naturvernforbundet, and Nature and Youth with this letter are challenging politicians in Finnmark to speak loud and clear about what they will do to stop pollution.

We demand that Norwegian politicians pressure Russian politicians to:
• provide full access to pollution data;
• collaborate on emission measurements – and again allow Norwegian pollution monitoring stations on the Russian side of the border;
• force Norilsk Nickel to modernise its plants on the Kola Peninsula to dramatically reduce emissions.

Emissions from the Norilsk Nickel pollute groundwater, rivers, and lakes and are also transported by air. In Russian regions near Norilsk Nickels production sites, the proportion of respiratory disease is far higher than elsewhere, and life expectancy is lower. Incidence of childhood illnesses, according to official Russian data, is also greater, as is the rate of miscarriages and premature births.

In Norway, official state warnings are issued to limit intake of reindeer meat along the Norwegian border because of high heavy metal content. 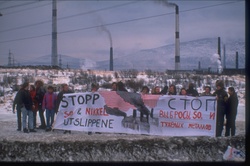 Norway has been familiar with the problem of pollution from the Norilsk Nickel’s plants in the town of Nickel, on the Kola Peninsula, since as early as 1974. That year, the Norwegian Institute for Air Research (Norsk Institutt for luftforskning, NILU) registered forest damage in Finnmark that was directly attributed to sulfur dioxide emissions from Norilsk Nickel. By then, the Russians had been producing nickel and other metals at the company’s factories for over 35 years. The difference was that during the first 30 years, local ores with low sulfur content were used in the process. In 1968, nickel factories started using ore from Northern Siberia. This ore has a content of more than 30 percent sulfur and, consequently, emissions of sulfur dioxide grew significantly, contaminating the territory in and around the enterprises in Nickel on the Kola Peninsula.

The Russians claim that sulfer dioxide emissions have declined somewhat in recent years. That is correct, but the reason is not purification measures, but the resumed use of local ores. In any case, 100,000 tonnes of sulfur dioxide are released annually from the company’s two plants on the Kola Peninsula. That is five times Norway’s yearly national emissions.

In addition, emissions of heavy metals are present, and they have increased noticeably. More information about these emissions is available in Bellona’s 2011 report “Environmental Challenges in the Arctic: The Soviet Legacy of Industrial Pollution.”

After the report was published in February, Sergei Selyadin of the Kola Mining and Metallurgical company (Kola MMC) promised the smelting plants on the Kola Peninsula would be modernized. But such promises have been issued before with no results.

It was in the early 1990s, when the Soviet Union was still the owner of the mines where ores are extracted and the factories that process them, that the original 300 million NOK agreement was concluded between the Soviet Union and authorities from Norway, Sweden, and Finland. Under the agreement, a promise was made that the Kola Peninsula enterprises of Norilsk Nikel would be modernised and that purification facilities would be built with this funding. Today, Norilsk Nickel is the owner, with Kola MMC being the subsidiary that operates the two plants on the Kola Peninsula. Several more mines and a number of smelting sites are also operated near Norilsk city in Northern Siberia, referred to by the Blacksmith Institute as one of the world’s ten most polluted cities.

With the privatization of Soviet mining operations came a more pragmatic attitude. Modernisation was now more a matter of whether it would be profitable and if it would increase production. But in spite of difficulties, in 2001, Norway and Russia entered into a new agreement. Of the original 300 million NOK, 30 million had already been spent, but the remaining 270 million was to be paid, according to the new agreement, if 90 percent of Norilsk Nickel’s emission were purged by 2006. When that did not happen, the Norwegian Ministry of the Environment pushed the deadline back to 2010.

In 2007, the pollution danger began to attract the attention of the Norwegian media, after NILU studies showed that the air in the area of Kola MMC’s operations in the town of Nickel contained twenty times more sulfur than the limit recommended in Norway. The deterioration of air quality was temporary and due to pipe repairs, a worker told the newspaper Finnmarken.

The newspaper wrote: “The inhabitants of the city are struggling to breathe and no child is allowed out in the streets.” When the repairs were finished and the usual annual amounts of sulfer dioxide and heavy metals were oozing from the factory’s smokestacks, everything was back to “normal” and in 2008 Norilsk Nickel withdrew from the 300 million NOK environmental agreement!

Norilsk Nickel now has plans to develop two large nickel mines in Voronezh Region in Central Russia. When mineral recovery starts there, the company will process the pellets produced there at the smelting plant in Nickel. If modernisation at the smelting enterprises is not accomplished, the added production will lead to an estimated 15 percent increase in pollution levels on the Kola Peninsula.

Environmental organisations in Russia are reporting increasingly difficult working conditions, compounded by an atmosphere of suspicion, secrecy, and attempts to classify research data. It is thus vital to keep up pressure from the Norwegian side of the border.

We are not seeing that the deadly fumes from Russia have made it onto a single party programme in Finnmark. So this is the challenge to our politicians in the north: Who will make sure that Norilsk Nickel and the Kola Mining and Metallurgical Company keep their promise to modernize the smelter in Nickel and stop the filth?