A devastating wave of wildfires across Russia could ravage millions more of acres of forests and cause worse damage than last year’s catastrophic blazes, environmentalists and officials have said, despite last year’s promises from forestry agencies that such ruin would not be repeated. 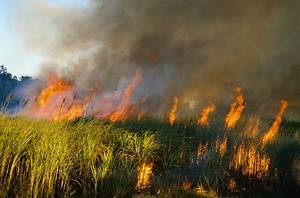 Elena Kobets, a researcher with Bellona on the effects of black carbon on climate change, pointed out disturbing data from the Russian Federal Agency on Forestry Management indicating that extremely high temperatures in Siberia this year alone have led outbreaks that exceed the number of fires reported there over decades.

According to information Kobets gathered on this year’s fires from Siberian media, some 25 percent of them resulted from farmers burning desiccated agricultural grasses that have now grown into full-blown forest fires.

In 2010, an unprecedented heat wave triggered fires that killed 55 people, destroyed thousands of houses and torched 2.6 million hectares of forests — an area slightly larger than Belgium.

Focused mostly in Russia’s western regions, last year’s fires also churned up radionuclides in the soil from the 1986 Chernobyl disaster and threatened many nuclear power plants.

This year, three firefighters have died and dozens of wildfires have already engulfed more than 600,000 hectares of mainly Siberian forests, reported Agency France Presse, in an area that is nearly three times what was affected last year, said Emergency Services Minister Sergei Shoigu.

“Wildfires (in Siberia) are greater in area compared to last year’s fires by more than two times,” he told Russian State TV on Saturday.

Threats to taiga could be devastating to climate

These forests and their ecosystems are the main concern for climate scientists.

Home to forests known as Taiga, or the boreal forest, scientists have registered major environmental changes in the Taiga as a result of global warming.

Airplanes and helicopters have dumped tons of water over the Chunsk district. Siberia Governor Dmitry Mezentsev has declared a state of emergency in the entire area as the situation appeared to be increasingly “deteriorating,” Itar-Tass reported.

Greenpeace claimed the Russian government is silencing information about fires, especially about the renewal of peat-bog fires around Moscow that last year choked the capital with acrid, toxic smoke.

“There are dozens of them around Moscow,” Greenpeace’s Grigory Kuksin told journalists. “It’s technically impossible to put out some of them already.”

Once ignited, peat bogs can smolder for months or years, surviving even heavy rains and snow, said Kuksin. While burning, they emit acrid smoke that can aggravate asthma, bronchitis and heart conditions.

Moscow last year was engulfed in a thick blanket of smog that, combined with the intense heat, doubled the death rate.

In the Soviet era, authorities extensively drained numerous peat bogs around Moscow and other cities in western Russia to extract peat for fuel, said Kuksin. Once coal and oil replaced peat as fuel, the drained peat bogs were left unattended.

Moscow authorities have allocated some $150 million to flood the peat bogs, Greenpeace’s Yaroshenko said that little has been done due to corruption and bureaucracy.

“What’s been done is a drop in the ocean,” Yaroshenko said.

Russia’s forestry agency chief Viktor Maslyakov played down the threat to Moscow this year, but admitted that a surge in forest and peat-bog fires is imminent.

“The summer will be tense and uneasy,” Maslyakov told journalists.

He said the government should declare an emergency situation in three Siberian regions, where unusually hot and dry weather has caused multiple wildfires.

A top government official accused illegal loggers of starting some of the Siberian fires to conceal the traces of their work.

“They set it all afire — and covered it all up,” Deputy Prime Minister Viktor Zubkov was quoted by the Itar-Tass news agency as saying.