The government of Ontario, Canada, has made a deal with Rentec, an American company that plans to build a bio jet fuel refinery operating by 2015. With greener fuel, aviation companies avoids being economically penalised when aviation is included in the EU Emissions Trading Scheme. 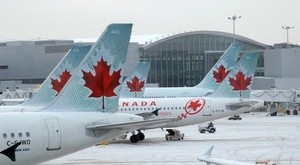 The EU plans to include emissions from aviation into the Emissions Trading Scheme, a regional cap and trade system for carbon dioxide emissions in the EU. The extra cost from this for international aviation might add up to up to 1.5 billion euro.

One way for aviation companies to avoid extra costs is to add more green jet fuel, in accordance with the results of the EUs pending investigation into the sustainability of biofuel production.

– I am happy to see that the inclusion of aviation into the ETS has a global effect. The Canadian project shows that it is possible to see green opportunities, rather than a narrow focus on increased costs. Still, this of course requires that the project has done a thorough job with securing that the environmental impact from their fuel production is at a minimum, says Tone Knudsen, deputy director of Bellona Europa.

The deal with the Ontario government provides Rentec with 1.1 million cubic meter of wood for the refinery in Sault St. Marie.

– This project is significant; it is the largest crown award ever in Ontario. This will be an extremely low-carbon fuel, said Hunt Ramsbottom, Rentech´s chief executive, according to the Star.

With this biomass available, Rentech has enough supply to justify building its refinery, which is planned to be operating by the end of 2015. The renewable jet fuel refinery will be called the Olympiad Renewable Energy Centre and produce more than 85 million litres a year, at an investment cost of C$500 million.