KIRKENES, Norway – A new Bellona report on Russia’s Norilsk Nickel shows that harmful pollution will continue to come from the mining company based in Russia’s north, and that it could become worse. At the same time, obtaining environmental information from Russia has become more difficult. 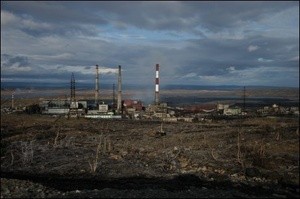 Bellona’s report “Environmental Challenges in the Arctic. Norilsk Nickel: The Soviet Legacy of Industrial Pollution” was launched at a conference held in the far northern Norwegian-Russian border town of Kirkenes, close to the Kola Peninsula-based operation of Norilsk.

“Norilsk Nickel is the cause of a great burden on the environment and health in the north, and it’s done very little to fix the problems,” says Kristin Jørgensen, head of Bellona’s Russian Department.

“The company runs a large surplus, but the willingness to invest in environmental measures and treatment technology is not at present, “says Jørgensen.

Bellona’s report shows that there are still significant emissions of sulfur dioxide (SO2) emissions from Norilsk Nickel – around 100,000 tonnes each year – which is more than five times the total Norwegian emissions of SO2.

In addition, the company is responsible for significant emissions of dust with heavy metals. Norwegian research shows that the concentration of heavy metals in the Norwegian-Russian border area has increased in recent years and that the source of this is the Kola Peninsula branch of Norilsk Nickel.

As long as the production methods are not modernized, the harmful pollution will continue, and the effects on the environment and people’s health will therefore only become worse.

The Russian company Norilsk Nickel operates mines and smelters around Russia and is the world’s largest producer of nickel and palladium, as well as a significant producer of copper. A large part of the business is located on the Kola Peninsula near the border with Norway.

In a meeting with Bellona, representatives of Norilsk Nickel said that half of the contamination probably comes from other sources in neighboring countries. In Norway’s northern Finnmark county, where the Norwegian atmospheric measurements are taken, however, there are no industries with comparable emissions.

Norilsk Nickel has also expressed little confidence in the measurements taken on the Norwegian side of the border. In 2008, a Norwegian station on the Russian side was shut down under unclear circumstances.

“We have multiple sources who tell us that Norilsk Nickel does not trust the Norwegian pollution level measurements now, and this is something they’ve never said before, so this is sensational. It’s pure disinformation,” said Jørgensen.

Damage to health and the environment

Emissions from Norilsk Nickel pollute groundwater, rivers and lakes, in addition to those emissions carried by air.

In the areas near Norilsk Nickel’s activities on the Kola Peninsula, the proportion of respiratory diseases is far higher than elsewhere and life expectancy is lower. According to official Russian figures, there is a higher incidence of disease in children and higher rates of miscarriages and premature births.

On the Norwegian side of the border, special dietary advice is given because of the heavy metals.

Bellona wants full access to all the emissions figures from Norilsk Nickel, and wants a greater openness from Russia. Bellona also requests that the Norwegian weather station for the emission of SO2 be re-opened in Russia, and requires that the Norwegian authorities take a tougher stance in getting meetings with Russian colleagues.

In an interview with the Norwegian daily VG, State Secretary for the Norwegian Ministry of Environment, Heidi Sørensen, said that Russian authorities will now deal with pollution from Norilsk Nickel.

Bellona’s Jørgensen hopes this will actually happen, but is not convinced:

“Currently, we have nothing concrete to work with, only the same vague promises that the Russians have made all the time. Norwegian authorities have been too helpless in this matter, yet we have behind us 20 years without significant environmental results,” said Bellona’s Jørgensen.

“An entire generation has grown up while they only have negotiated. When will they take the environment and the health of people in this area seriously?

Bellona adviser Larisa Bronder has led the work on the new report, and she has found a Russian statement showing that the total emissions from Norilsk Nickel in the Kola Peninsula increased by 5000 tonnes from 2008 to 2009.

“At the same time that we find such figures, Norilsk Nickel itself says that the pollution has become much less, so there is conflicting information here,” said Bronder, adding:

“A report from the Russian institute Atmosphera is said to show that the emissions are much smaller, but when we tried to obtain this report, we were rejected with a reference to the report containing commercial secrets,” she said.

Mikhail Gorbachev opened up Russia for more transparency and democratic right, but after Vladimir Putin ascended the presidency at the turn of the millennium development went into reverses.

Now, environmental laws are weaker and poorer than they were in the 90s. Rights are shrinking, supervisory systems do not function and corruption is widespread. To engage in environmental protection is more difficult because the working conditions for NGOs, journalists and lawyers have been deteriorating.

“The Russian population in the area know much less about pollution than it did in the 90s. Common Russians will get only beautifully painted stories and be deceived,” said Jørgensen.

In congratulatory telegrams to Norilsk Nickel on its 75th birthday in 2010, now Prime Minister Putin emphasized that the company had “perpetually high environmental standards,” while President Dmitry Medvedev wrote that the company “is actively implemented the program in the field of technological upgrading, environmental safety, corporate responsibility.”