MURMANSK – On a visit to the Kola Peninsula branch of Norilsk Nickel in the Pechenga region, Murmansk Regional Governor Dmitry Dmitrienko said of the controversial plant that “many aspects of this problem are in a significant measure contrived because the standards and methods of evaluation are very different.”

Published on February 22, 2011 by Anna Kireeva, translated by Charles Digges 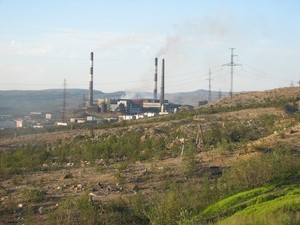 Norilsk Nickel has further insisted in recent days that only the plant itself is in possession of objective, reliable data about pollution levels and how they are affecting the environment.

Governor Dmitrienko’s quote on his visit to the plant is perplexing: the conditions of the nearly lunar landscape of scorched land in the Monchegorsk and Nickel regions can hardly be called “contrived,” any more than can be the demands of Prime Minister Vladimir Putin to Norilsk Nickel to go a little greener, or the many years of worry from northern Norway about transboundary pollution.

As explained by the government of Murmansk’s press service, Dmitrienko meant only to point out that there are various points of view about the problems. “The Russia and Norwegian sides use different methodologies [to determine] pollution and harm,” a Murmansk Regional government official told Bellona Web.

“Many aspects of this problem are in a significant measure contrived because the standards and methods of evaluation are very different. But in any case, the company has spent $100 million to solve this issue and did it independently, fully understanding that it is socially oriented, cares about environmental safety of the North and of those people who live here,” read the press release from the Murmansk Regional government.

“If the regional administration considers such big environmental problems to be contrived, then it can be suggested that the whole blame rests with environmental organisations,” said Bellona Murmansk director Andrei Zolotkov. “It is they who are aggravating these questions, and giving them a bad colour for the metallurgical company. And it is spending enormous financial resources on modernization of productions, diligently defend the health of its workers, and making efforts to restore polluted territories around the plants. But only when you drive past Nickel or Monchegorsk do you understand the results of this ‘diligent care,’” said Zolotkov.

The figures that are supplied as an argument in favor of the company’s positive activities would be good to fortify with some date about the demographic situation in the company towns, about the health conditions of the personnel, and about the incidence of work related illness. These figures are far more articulate testament about the spent millions.

According to Larisa Bronder, energy projects coordinator for Bellona’s Oslo office, contesting Norwegian data is to question the entire Norwegian state system of observation and monitoring.

It is sufficient to look at the eloquent data of the measurement station at Murmansk Gidromet, where they have also sufficiently observed Russian mining and production combines for the content of sulphur dioxides in the atmosphere. Furthermore the Murmansk Regional Committee for Natural Resources and Ecology has attested to significant pollution by heavy metals of soil and water bodies in its report entitled “On the Condition and On the Defence of the Environment in the Murmansk Region in 2009,” said Bronder.  The official data of RosGidromet and the Committee for Natural Resources and Ecology are also represented in Bellona’s most recent report, “Norilsk Nickel: The Soviet Legacy of Industrial Pollution.”

This work represents a part of the reconstruction program for the Kola branch of Norilsk Nickel. Its main purpose is to reduce emissions of sulphur and dust as well as heavy metals waste. The project represents a turning away from the existing metallurgical technology filtration and roasting of copper-nickel concentrate into pellets that are to be sent for smelting – which is connected with huge emissions of non-treatable supherous gasses – and a shift to briquetting and pelletizing technologies where no roasting is required, Norilsk Nickel’s website reports in a release.

This new process is expected to reduce emissions of sulphurous gasses into the atmosphere at the Zapolyarny facility by 52 times – from 49,000 to 933 tons a year. g

“The construction of the workshop for briquetting copper nickel concentrations on the industrial area of the Kola branch of Norilsk Nickel in Zapolyarny will take away a number of environmental questions that our colleagues in the Barents region ask,” said Dmitrienko.

According to Sergei Selyadin, the general director of the Kola branch of Norilsk Nickel, the modernization of production strength of the company in the village of Nickel takes into account the demands of environmental safety. The company plans to spend 5 billion roubles ($171.9 million).

In Bellona’s opinion, the reconstruction of the industrial base in Zapolyarny will help reduce emissions only in that city. However the briquetting production workshop in Nikel will be built on the part of the industrial zone that has not undergone modernization. It has undergone only an overhaul with an accent on substituting aged parts, which took 23 years to complete.

“In this way, all sulphur that will remain in the composition of the ore concentration, will as a result of the smelting productions, end up in the atmosphere as sulphur dioxide,” said Bronder.