MURMANSK – Norway’s Ministry of Foreign Affairs, environmental organizations and the population of two countries are concerned about the mounting problem of Russian industrial pollution mounting on the border of Russia’s far northern Murmansk region and the Scandinavian country.

Published on February 14, 2011 by Anna Kireeva, translated by Charles Digges 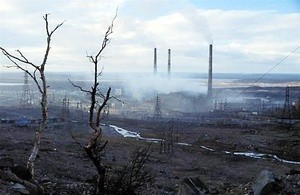 Among the issues discussed by Norwegian and Russian politicians, businessmen and environmentalists at an international conference held last week in the northern Norwegian city of Kirkeness, one of the most vexing was that of the industrial pollution from the Norilsk Nickel plant near Murmansk.

According to Bellona President Frederic Hauge, the Norwegian environmental ministry has demonstrated that it cannot produce results with the Norilsk Nickel situation.

“We began dealing with this problem 20 years ago, but so far little has changed,” said Hauge. “Why can’t Norway use all mechanisms of influence on the company?”

Foreign Minister Støre attempted to answer for the lack of results brought by the environmental ministry.

“I can assure you that the we will continue to put pressure on our Russian partners regarding the Nickel problem,” said Støre. “The company makes a lot of money and is obligated to be responsible for the environmental consequences that are created as a result of its activities. The pollution of the environment by the nickel smelting plant are unacceptable and I will raise this question on the needed level with Russian leadership,” Støre promised Bellona.

Murmansk Regional Governor Dmitry Dmitriyenko and the speaker of the Murmansk Regional Duma, Yevgeny Nikora did not touch on environmental issues in general or the more specific problem of industrial pollution in their appearances, preferring to ignore the sharp remarks of the Norwegian politicians on the issue.

Last year, Bellona released a report entitled “Norilsk Nickel: Impact on the Environment and Public Health.” In it, the environmental group reviewed in detail the workings of Norilsk Nikel and its daughter facility on the Kola Peninsula near Murmansk.

Among the conclusions of the report were that today’s environmental situation in the regions where Norilsk Nickel works is as adverse as it was 20 years ago, that the company has a very low level of environmental openness, that there is no access by the public to the results of international and internal audits or to the system of accountability of the company’s natural preservation activities.

Bellona regards Norilsk Nickel’s environmental program as very ineffective, targeted principally on the creation of a good image for the company, and not on the resolution of existing environmental problems. Of course, such conclusions are not endearing to the management of Norilsk Nickel, who were present for the presentation of Bellona’s report in Murmansk.

“Our objective was to objectively evaluate the situation, which we did, using all accessible and open sources of information including the official site of the company,” said Larisa Bronder, a project coordinator with Bellona and a co-author of the report. “However they accused us of not being objective and suggested that we use information not from official Russian and Norwegian sources, but from Norilsk Nickel.”

According to Bronder, “Norilsk Nickel’s representatives assured Bellona a million times that the company is open for contact, agreed tp take part in the seminar on this topic that Bellona will be hosting, and turned us to their site with the works ‘there is all the information.’”

Norilsk Nickel’s representatives will not come clean about their apparently negative effect on Norway. In other words, the company’s representatives are try to lay off the blame for negative impacts to the ecosystem along the Russian-Norwegian border on other neighboring countries. In March 2010 the Nation Research Institute Atomosfera, which is subordinate to the Ministry of Natural Resource and the Environment, was commissioned by the Kola Peninsula division of Norilsk Nickel to measure pollution in the air between the two industrial centres – the Norlisk Nikel plant and the Murmansk Region city of Zapolyarny – and the Norwegian border. The data were not above Russian norms for air quality. Atmosfera also conducted a simulation of air pollution that migrates to Norway from Norilsk Nikel. These data showed critical pollution loads on only one point – on the 50 by 50 kilometre area where the Norilsk Nikel plant is located. The area encompasses only a small part of Norway.

According to Atmosfera’ conclusions, it is necessary while evaluating the Russian impact on pollution on Norway to take into account that excesses of critical loads of pollution happen as a result of the sum total of all pollution sources in the area surrounding the Russia-Norwegian border as well as those sources located in the EU – and not just the pollution generated by the Kola Peninsula branch of Norilsk Nickel.

Because a full accounting is not available on the official site of Norilsk Nickel, aside from those that were mentioned, Bellona sent a number of official inquiries with requests to be furnished with the accountings in order to obtain fuller and more objective information about the environmental conditions surrounding the company.

Bellona Web was only able to get this information as an officially registered media organization. Referring to the federal laws “On information” and “On the mass media,” the management of the Kola Peninsula branch of Norilsk Nickel refused to supply the requested date citing “commercial secrecy.” According to Nikolai Rybakov, director of the Environmental Rights Centre (ERC) Bellona, the company has no right to keep environmental issues secret. Incidentally the same laws apply to the government.

“First, according to federal legislation, a regimen of commercial secret cannot be established by people realizing entrepreneurial ventures relative to information about pollution of the environment,” said Rybakov. “That means that [the Kola branch of] Norilsk Nickel does not have the right to define what a “commercial secret” is. Second, the law “On information,” to which Norilsk Nickel refers, decrees that information about the environment cannot be restricted.”