In a move designed to melt remaining doubts that global warming is a politically motivated hoax, the US government and the Administration of President Barack Obama released more than 1000 declassified photographs taken by intelligence satellites showing dramatically receding ice shelves in the Arctic. 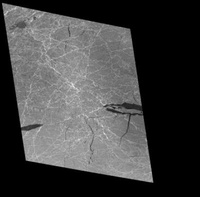 Photo: US Department of the Interior/US Geological Survey

The photographs – secreted from public scrutiny during the administration of George Bush – were released on June 16 and have been the subject of study for the last week, were released at the urgent urging of the American Academy of Sciences, sources with the Department of the Interior said.

The photos purport to show the effect of CO2 and other greenhouse gasses and the effect they are having on the world’s necessary ice caps.

Detailed images are available at the United States Geological Survey.

Photo: US Department of the Interior/US Geological Survey

Despite the scientific import of the images’ release, one of NASA’s chief scientists involved in analysing them said it was too early to determine what impact the melts will have on the world climate as the pictures themselves to not provide enough data to make distinct conclusions.

He also said that modelling certain climactic scenarios was simply not possible yet. The NASA scientist nonetheless hailed the release of the photos as “a huge surprise.”

The images, taken over the 2006 to 2007 period were deemed "unsuitable for public release” by the Bush administration. But earlier this month, the National Academy of Sciences recommended the Obama Administration declassify the photos, which they did within a few hours of the recommendation.

The images were derived from classified images made as part of the Medea programme, which lets scientists request spy pictures from environmentally sensitive locations around the globe.

Scientists requested images taken by intelligence satellites because the resolution is much greater, in some cases, than other available satellite images.

Some 700 images that were released by Obama show areas of ice from six sites around the Arctic Ocean. Another 500 photos of 22 sites from areas around the United States itself wee also released.

Often called the planet’s “air conditioner” the photographic proof of loss of ice in the areas photographed would have a catastrophic effect in rising global temperatures.

Various sites in the blogosphere on the internet have been debunking the photos as doctored since their release on July 16th, commented Universe Today – which is not questioning the validity of the photos because their distribution to the public by the US Geological Survey.

Much of the speculation that the photos are a put up job centre around the political stakes for Obama himself, who is urging the US Senate, which is taking its August recess at the moment, to vote to pass his vast climate change bill – the first ever such bill to come before Congress. The bill has already passed the House of Representatives.

The Arctic images have a resolution of about 1 meter, a significant improvement over previously available pictures of sea ice which had a resolution of between 15 and 30 metres, Thorsten Markus of NASA’s Goddard Space Flight Center, told Reuters.

"These are one-meter-resolution images, which give you a big picture of the summertime Arctic," Markus said on Thursday, according to the news agency.

This, said Markus, was especially important as the images show very small details that can have an enormous effect.

One of these examples is the pools of melted water that form on the surface of ice Floes during the summer, he told reporters. Water puddles are dark and absorb heat, said Markus, as opposed to white ice that deflects heat.

Seeing the extent of the melted pools therefore gives climate scientists a more detailed picture of what might happen in the Arctic in the future. While individual puddles are small, noted Markus, collectively they cover about 30 percent of the Arctic.

"The (forecasting) models do well at capturing the overall sea ice cover in the Arctic," Markus said, according to Reuters. "But there are certain processes that we cannot adequately model yet, mainly (…) because we don’t have enough data."

Markus said the public release of these images was "a huge surprise –  I expected after the report, months could go by until somebody moved."