US Energy Secretary Steven Chu Monday called US President Barack Obama’s climate change bill, which is now making its way through Congress, the best legislative wager the nation could make to take a leading role on the world state in helping to tackle global warming, US media reports said. 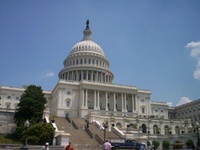 "The Waxman-Markey bill is our best shot of any thing I’ve seen in recent legislative pasts where Congress might get something (passed) and it’s got a lot support in the industry now," said Chu, speaking in televised remarks at the Reuters Global Energy Summit in Washington.

The bill would initially give away 85 percent of carbon permits to various polluters including utilities and steel producers, a far cry from US President Barack Obama’s proposal to auction 100 percent of the permits.

The give-away represents an early compromise while the legislation was still in committee, which cost it the support of Greenpeace USA, despite its strong backing from the Sierra Club, Bellona USA, the Natural Resources Defence Council and dozens of others high power environmental groups and industry consortiums.

Bill maintains biting teeth for Copenhagen
Chu recognised the climate change bill does not contain all the measures the White House was seeking, but he said it was important the country start tackling the big climate issues.

"This is the really the arc of what really can be done," Chu said at the televised conference. "I personally believe strongly that we have to get started and so a comprehensive energy and climate change bill, which has to recognize certain compromises, is really the issue."

US will be taken seriously
Even if the United States does not have a cap-and-trade system approved by December when world leaders meet in Copenhagen to negotiate an international climate accord, Chu said other actions supported by the Obama administration would signal the United States is serious about lowering emissions.

The Environmental Protection Agency’s finding that carbon dioxide endangers human health, the acceleration of increased vehicle fuel economies and the billions of dollars allocated for renewable energy technology in the stimulus package all show America’s commitment to averting climate change.

A key component of any international climate agreement will be how to handle rapidly growing emissions from developing countries such as China and India.

Chu said he is talking with Chinese officials on how the United States can collaborate with China on developing techniques to construct energy-efficient buildings.

Possible changes as the bill bounces through committees
The legislation overcame one big obstacle last month, when it was approved by the House Energy and Commerce Committee. Now it must proceed through several more committees, before it reaches the full House of Representatives for a final vote.

Even as Chu spoke on Monday, many committees in the House of Representatives were licking their lips to introduce changes when the bill lands on the House floor this month or next.

For example, some moderate Democrats want a 14 percent goal, instead of 17 percent, for the reduction in carbon dioxide emissions by 2020 – something bound to send up a wail from the world environmental community and the Obama administration.

Agriculture may want allowances on oil and gas drilling
The House Agriculture Committee has threatened to withhold support for the bill unless the largely moderate Democrat Committee wins safeguards for ethanol and other biofuels from proposed Environmental Protection Agency regulations. The climate bill could give them leverage: assuming most House Republicans oppose the bill, many in this group of moderate Democrats must be on board in order to pass the measure.

Another possible initiative for oil could be new planning for offshore oil drilling. If incorporated, this could give some Democrats enough political "cover" to support the climate bill, as their worries about higher energy prices related to the climate bill could be eased by prospects of more domestic oil production.

Revenues could be diverted
The House Ways and Means Committee may leave the bill largely untouched. But if this panel decides it needs to raise revenues to pay for other initiatives, it could attach new tax provisions to the climate bill. Obama had hoped that the climate legislation would generate hundreds of billions of dollars to finance the continuation of a working-class tax break, but the Energy and Commerce Committee did not go along.

The Ways and Means Committee also oversees trade and it could consider provisions such as further aid to heavy manufacturing firms competing with foreign imports.

National climate agency might be needed for passage
The House Science and Technology Committee wants to create a national climate agency within the National Oceanic and Atmospheric Administration. It might try to attach the initiative to the climate bill moving through the House. The idea is to improve scientific knowledge of climate change and provide forecasts and warnings to the public related to changes in the weather and climate.

It is unclear how the climate change bill will fare in the Senate, where passage will probably be more difficult given the body’s more moderate make up.