WASHINGTON – Under pressure from President Barack Obama, the US Congress has passed an economic stimulus law that was hastily put together in the face of the most severe economic recession seen in a couple of generations. President Obama had lobbied hard for the package during the 2008 election and it remained a priority in his first few weeks in office as the recession steadily deepened.

Published on February 25, 2009 by Jonathan Temple 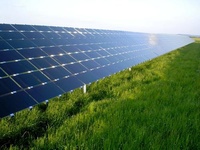 Promoting the development of new energy technologies was always at the forefront of Obama’s economic strategy. The United States remains an energy hungry nation with a growing population. It will take time to emerge from the current economic recession, but when it does so, US demand for energy will grow and if, as now, coal, natural gas and oil remain the dominant fuels of choice, there is a serious risk that carbon dioxide emissions will grow to unprecedented levels unless new energy technologies are deployed. When signing the economic stimulus deal in Denver last week, President Obama zeroed in on energy saying that “because we can’t power America’s future on energy that is controlled by foreign dictators, we are taking big steps down the road to energy independence, laying the ground work for a new green energy economy that can create countless well paying jobs.”

The legislation contains about $43 billion for direct energy and efficiency programs, with another $20 billion of energy related tax-breaks. Dan Weiss, a senior fellow with the Center for American Progress, a progressive Washington DC think tank said: “The Obama recovery plan will turbocharge clean energy investments and create thousands of jobs. The plan will more than triple existing levels of clean energy technology.” Energy efficiency and renewable energy received the biggest boost, representing nearly half of the direct energy spending in the bill. This included $6.3 billion for energy efficiency and conservation grants and $5 billion to insulate the homes of low-income people. Smart grid technology, which enables more efficient electricity transmission and better management of renewable energy, received $11 billion. R&D for advancing carbon capture and storage technologies received $3.4 billion.

Americans are good at responding to technical challenges. They put a man on the moon, and have boundless optimism. Having ignored the signs of climate change for so long, Americans are now beginning to understand the challenges it poses. President Obama talked about it during the election campaign, and Congress has started to plan legislation to curb greenhouse gases. It’s only the start of the process of fully involving the US in the international effort to tackle climate change. But it is a start and the US is already leaving the entrenched positions of the Bush Administration behind. Climate change is  “the most demanding environmental challenge” facing the United States today, president Obama’s pick for the White House science adviser, John Holdren, said on February 16th. He said the repeated the message of analyses by the National Academy of Sciences, the UN Intergovernmental Panel on Climate Change and other advisory groups is: “Climate change is real, it is accelerating, it is caused in large part by human activities, it is dangerous and it will become more so in the future.”

For the Obama Administration, this means cutting US greenhouse gas emissions 80 percent by 2050. That’s a number that will help the world limit the average global temperature increase over land to 2 degrees Celsius, Holdren said.

It is time for the US to re-engage in the international process to negotiate an international agreement for the post 2012 era. This year will culminate with a climate summit in Copenhagen in December. It is certain to be a long and difficult negotiation but the whole process will be worthless unless the United States fully participates. President Obama has promised that the United States will lead the fight against global warming and is moving to emphatically overturn Bush administration climate change policies. “We will make it clear to the world that America is ready to lead” President Obama said at the White House on January 26th. We congratulate President Obama on his victory. Time has run out to tackle the challenge of climate change. American action and the President’s leadership will be necessary if we are to turn things around.

Jonathan Temple is the Director of Bellona USA