NEW YORK/MASSACHUSETTS – Oil companies and coal-fired power plant operators would be the likely losers if Democrats expand their majorities in the US Congress and Barack Obama wins the White House. The beginning of a Republican backed nuclear build would also be stemmed as an Obama administration studies safer on-site storage options for spent nuclear fuel.

Published on November 4, 2008 by Charles Digges

Obama leads nationally on election day here in the United States by 3 to 7 percentage points over Republican candidate John McCain, according polling data compiled by RealClearPolitics.com.

Voters gathered at polling stations early election-day morning in Massachusetts and New York – territory dotted with placards and bumper stickers for Obama – who openly said they planed to punch their ballots for the democratic candidate, said concerns for the environment weighed heavy in their decisions. They also showed a high awareness that new energy ideas could be part of the engine to drive America out of its financial doldrums. 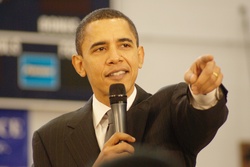 The IPCC has said the world must cut emissions of greenhouse gases into the atmosphere by 50 percent to 85 percent by 2050 to limit the damage.

Obama in late September promised his administration would put the United States, among the world’s largest greenhouse gas producers, on track for an 80 percent cut in climate gas emissions by 2050.

“This is something the UN is saying is a good idea and they won a Nobel Prize for it, for Christ’s sake” said Nora Burns, 32, in Western Massachusetts, who turned out with her two young children to vote in a hybrid Toyota Prius.

“The McCain-Palin ticket is pretty much denying that such cuts are possible because (vice-presidential candidate Sarah) Palin refuses admit that human beings caused this – that is just backward thinking,” she said.

Her comments echoed those of Richard Howard, a 51-year-old insurance adjuster of New York.

“The environmental portion of my vote is something I think we owe the rest of the world after eight years of totally screwed up foreign policy,” he said.

With power plants accounting for about 40 percent of US carbon-dioxide emissions, the power industry faces the starkest consequences from federal climate-change legislation that would force polluters to pay for emissions.

The energy industry losers
Companies hit hardest would include Duke Energy Corporation, which describes itself as the third-largest coal user in the country, burning about 46 million tons a year. Coal-fired power plants produce about half of the country’s electricity, according to Dow Jones financial newswire.

Oil companies including Exxon Mobil, Chevron, ConocoPhillips, Royal Dutch Shell, and BP would also be hit under a plan to impose a tax on windfall profits. Though Obama hasn’t spelled out the details, Senate Democrats earlier this year pushed legislation that would subject oil companies to a 25 percent tax on windfall profits related to the surge in crude oil prices, US media have reported.

No overnight changes – but voters seem willing to wait
Changes won’t be immediate. Obama’s transition team had been considering hosting a "green summit" shortly after he assumes office, Obama campaign advisors have said in an email interviews with Bellona Web.

Early on, an Obama administration will have to deal with many energy issues. The US Supreme Court in April 2007 found that greenhouse gases are pollutants under the Clean Air Act.

That leaves the US Environmental Protection Agency (EPA) to decide whether the emissions pose a danger to the public and should be regulated. The EPA will have to make a finding, something an Obama administration hopes to use as a tool to persuade Congress to begin taking action.

An Obama administration would also be confronted with decisions about vehicle fuels. Obama has called for establishing a low-carbon fuel standard, in which fuel suppliers would have to steadily reduce the carbon in their fuels, members of Obama’s campaign team have said in interviews with Bellona Web over the past several days.

Where Obama may falter
Obama’s promises to support clean-coal technology will be tested. His vow to keep coal part of the fuel mix is at odds with government forecasts that mandatory cuts in greenhouse-gas emissions would likely lead to the boarding up of hundreds of coal-fired power plants, reduce demand for coal, and destroy jobs.

Obama’s vision assumes that the US Energy Department will team up with private industry to invest in carbon capture and storage technology, an expensive project given that the US posted a $438 billion deficit in fiscal 2008, representing about 3.1 percent of the country’s economic output, Dow Jones said.

"We can’t afford to shut down all the coal fired power plants," said Sanjay Shrestha, an analyst at Lazard. But carbon-capture and storage technology isn’t an immediate solution because "it will take some time before that ends up becoming viable."

Yet Massachusetts voter Amy Springer, 25, said many people are probably willing to wait.

“The Bush years are something that acted on immediate impulse – no long term planning was involved in anything,” she said.

“To get things back on track will take planning, and I am willing to wait.”

Nuclear power is another question mark. Obama’s campaign says the US is unlikely to meet targets for greenhouse-gas emissions reductions without nuclear power – even though there are ready options that the campaign has, by its own admission, not fully studied yet.

But Obama vociferously opposes the storage of nuclear waste at the proposed facility at Yucca Mountain. His plan involves more study of long- term disposal issues and envisions that for now, waste would continue to be stored at current locations around the country.

Sunshine for alternative energy
Solar power and wind companies could be among the biggest winners given that an Obama administration wants to require that 10 percent of electricity come from renewable sources by 2012, and 25 percent by 2025. At least two dozen states have renewable-electricity requirements, though Obama would accelerate those mandates in some states and extend the requirements for the first time to parts of the Midwest and the Southeast.

Natural-gas companies would also benefit. The Obama campaign calls for looking at ways to speed up drilling for natural gas in an area know as the Barnett shale, which covers parts of Texas.

“We are hoping to break a lot of old traditions and wheel spinning policies in this election,” said Robin Johanssen, 72, in Massachusetts.

“This country needs fresh ideas like we need oxygen – and I prefer my oxygen to be clean. It’s time for a new deal.”