The UNEP (United Nation Environment Programme) are trying to work out a ”Global Green New Deal,” and their efforts are echoed in a new report from Deutche Bank, which recommend investors put their bets on green technology and services. Bellona argues that the financial crisis could pave the way for climate solutions. 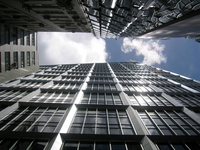 Bellona has argued over many years that climate mitigation and adaptation action should be regarded as opportunities for good and profitable long-term investments, rather than expensive obstacles.

A growing number of investors, banks and multinational companies are now reluctant to invest in activities with carbon liabilities such as coal-fired power plants. They place their investments into renewable energy and research towards bio-fuels.

“The Rockefeller Foundation and the Bill and Melinda Gates Foundation recently put $100 million into a company aiming to deliver bio-fuels that could compete in the marketplace. This is about time, and really encouraging”, says Svend Søyland, International Adviser for the Bellona Foundation.

Solving many challenges simultaniously
The name of the UNEP initiative is inspired by the New Deal mounted by President Franklin D. Roosevelt to end the Great Depression in 1930s America. Large public investments in infrastructure programmes such as hydroelectric power provided much needed employment for idle hands.”

Specific advice
Pavan Sukhdev, Executive Director of Deutsche Bank’s Global Markets Centre located in India, will champion this initiative. UNEP will in the course of the next 18 to 24 months prepare specific advice to authorities both in developed and developing countries.

“We are filling a toolbox with innovative approaches that can drive the necessary changes to foster green economy and renewed growth”, Sukhdev told the Norwegian daily Dagens Næringsliv.

This report highlights that investment in green technologies and services are likely to become the most profitable sector, outperforming all other market segments. Consequently, the traditionally conservative bank’s advice to its customers is to ramp up their investments in green technology.

Stern: ‘Tackle risk early’
Economist Nicholas Stern recently wrote a comment piece for Britain’s The Guardian in which he stressed the opportunities given by the financial crisis:

“Let us learn the lessons and take the opportunity of the coincidence of the crisis and the deepening awareness of the great danger of unmanaged climate change: now is the time to lay the foundations for a world of low-carbon growth,” Stern wrote.