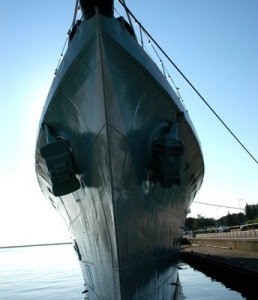 The main result of the decision was a global cap on sulfur emissions of 0.5 percent by 2020, with the option for groups of states to set tougher standards of as little as to 0.1 percent in their own sulphur protected areas.

The new measures come at a time when environmental organisations have revealed that more than 80,000 premature deaths annually worldwide due to shipping pollution could be with caps on sulphur.

Bellona and other NGOs, such as Friends of the Earth-US, Clean Air Task Force, North Sea Foundation, the European Federation for Transport and Environment, the European Environmental Bureau and the Swedish NGO Secretariat on Acid Rain where represented in the IMO working group have been reviewing have worked for three years to toughen binding standards for shipping industry sulphur emissions.

“This is a real ocean-sized change for the IMO,” said Eelco Leemans of the North Sea Foundation, representing Friends of the Earth International in a statement. “After a decade and a half of discussion and pressure from environmentalists around the world, the IMO has recognized the need for clean shipping fuels.”

Primarily, the NGO’s were concerned with reviewing the MARPOL Annex VI, a worldwide regulation on pollution from ships. In its current iteration, MARPOL stipulates ships are not allowed to use fuel containing more than 4.5 percent of sulphur.

States agree to implement sulphur limits
States working within MARPOL agreed to implement a global sulphur cap on marine fuels of 0.5 percent by 2020, while allowing interested countries to establish local Sulphur Emission Control Areas, where limits would be 0.1% from 2015.

David Marshall of the Clean Air Task Force in the United States said in a statement” “Meaningful global sulphur reductions are a long way off and countries that value the health of their citizens will need to adopt protective SECAs as soon as possible."

Emissions of sulphur oxides, major air pollutants and precursors for secondary particle formation in coastal areas, are directly proportional to the sulphur content in maritime fuel.

Shipping emissions currently equal other transport emissions
A study presented to the IMO working group by the NGOs showed if no actions were taken to reduce sulphur content in shipping fuel, the pollution will be responsible for 83,700 premature deaths per year by 2012. While the proposed cuts will not reduce that mordant figure to zero, it will cut by almost a third, to 33,700 annually by 2012.

The Commission has estimated that ship emissions will equal those from all land based sources by 2020 and would alone be higher than targets defined in the EU Thematic Strategy on Air Pollution.

Europe must take the lead
João Vieira from Transport Environment said in a statement that: "Despite this welcome move shipping fuels will still be 500 times more polluting than road fuels. That’s not good enough for Europe, with its bad air quality and dense population. We expect Europe to make the best use of these new provisions, and apply the strictest fuel limit in all its sea areas."

The agreement achieved with IMO’s Marine Environmental Protection Committee will not take effect until the final IMO vote in October.

Dragomira Raeva, EEB Air Policy Officer, commented in a statement: “Let’s take the opportunity created by these new standards and make sure there is no backpedaling before October.

“Now is the time for EU decision-makers to designate the North Atlantic, Mediterranean and Black Seas as low sulphur emission zones, consistent with the Baltic and North Seas, so all Europe’s seas will be covered by the stricter set of sulphur standards when they are adopted by IMO.”

While applauding IMO’s actions on sulfur emissions, the green groups criticized IMO’s failure to agree on any meaningful reduction of nitrogen oxide emissions from the existing global fleet of over 90,000 ships.

These shipping emissions contribute to acid deposition, deadly fine particles, and ozone smog, and as a consequence of IMO inaction, the total amount of these emissions is expected to continue to increase for at least the next several decades.