Shipping emissions underestimated by as much as three times, says leaked UN report

The full scale of emissions that are harmful to the climate from the world maritime shipping industry is almost three times higher than previously believed, according to a leaked UN study.

According to the British daily Guardian which saw the leaked report, its authors calculate that annual emissions from the world’s merchant fleet have already reached 1.12 billion tons of CO2,or nearly 4.5 percent of all global emissions of the main greenhouse gas.

The report suggests that shipping emissions – which are not taken into account by European targets for cutting global warming – will become one of the largest single sources of manmade CO2 after cars, housing, agriculture and industry.

By comparison, the aviation industry, which has been under heavy pressure to clean up, is responsible for about 650 million tons of CO2 emissions a year, just over half that from shipping, The Guardian quotes the report as saying.

Until now, the UN’s Nobel Prize winning Intergovernmental Panel on Climate Change (IPCC) has estimated shipping emissions to be a maximum 400 million tons.

New report relies on IMO measures
But the new draft report by a group of international scientists is a more sophisticated measure, using data collected from the oil and shipping industries for the International Maritime Organisation (IMO), the UN agency tasked with monitoring pollution from ships, the paper reported.

The draft report not only shows emissions are much worse than feared, but warns CO2 emissions are set to rise by a further 30 percent by 2020, the Guardian quotes the leaked document as saying.

"This is a clear failure of the system. The shipping industry has so far escaped publicity. It has been left out of the climate change discussion,” said IPCC chair, Dr Rajendra Pachauri, when contacted by reporters about the leaked draft report.

“I hope (shipping emissions) will be included in the next UN agreement. It would be a cop-out if it were not. It tells me that we have been ineffective at tackling climate change so far."

The figure cited in the leaked report is a source of embarrassment for the four governments – including Great Britain – which paid for it. Various EU nations have minimised the impact of the shipping industry on the global climate, underestimating it as being responsible for some 2 percent of worldwide emissions.

One exception to the rash of under-reporting has been Norway, which since 2006 has been pressuring the shipping industry to abandon diesel fuel in favour of fuel cells, under the FellowSHIP programme which promotes the use of natural gas. 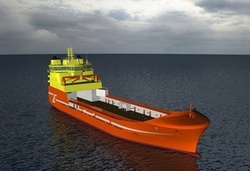 Eidesvik Offshore and DNV (Det Norske Veritas) have taken the helm to develop a fully integrated hybrid fuel cell system for ships, the first of which will be delivered in 2008.

The new ship will reduce by 23 percent the emissions of C02. The ship will in addition limit its nitrous oxide, another greenhouse gas, output by 89 percent. In total, Norway has estimated that the nitrous oxide output of its shipping industry is equal to that of 22,000 cars.

Available alternatives and legislation to ratchet up pressure
Pressure is now expected to increase on ship owners to switch to better fuels and on the EU to include shipping in its emissions trading scheme. Last month aviation was provisionally included following intense pressure – but shipping escaped, The Guardian reported.

The European Commission (EC) also published a draft policy in October to include shipping emissions in a single framework to regulate maritime transport, off-shore energy production, carbon capture and storage, tourism, fisheries and environmental protection in European and international waters.

Previous attempts by the industry to calculate levels of carbon emissions were mostly based on the quantity of low grade fuel bought by ship owners, the report revealed, according to the paper.

But the latest UN figures are considered more accurate and comprehensive because they are based on the known engine size of the world’s ships, as well as the time they spend at sea and the amount of low grade fuel sold to ship owners.

The UN report also reveals that other pollutants from shipping are rising even faster than CO2 emissions.

Peter Smith, managing director of Intertanko, the grouping of the world’s largest tanker operators which provided data for the report, said the industry was taking steps to cut emissions, citing a growth in shipping coupled with a expanded use of more efficient ships, and said that today’s fuels move loads on large tankers twice as far as they did 20 years ago, The Guardian reported.

"World trade and ship numbers have seen a steady increase, but in parallel there have been economies of scale with larger, more efficient ships. Individual ships have steadily been reducing their fuel consumption for the last 20 years. One litre of fuel on a modern very large crude carrier moves one ton of cargo more than 2,800km; this is more than twice as far as 20 years ago."

A spokesman for the Department for Environment, Food and Rural Affairs said the government would support the development of a global emissions trading scheme through the IMO, and was also "investigating the feasibility of including maritime emissions" in the EU’s trading scheme. He said the shipping industry must take its "share of responsibility" for tackling climate change.