WASHINGTON—Senators remain divided on climate change despite a record number of named hurricanes that slammed into the US gulf coast in less than a month, which escalated oil prices led experts to conclude that the recently approved Energy Bill will neither slow nor stop the growing green house gas (GHG) emissions from US sources. 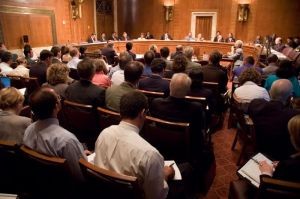 During the debate on the Energy Bill, a full Senate agreed to issue a statement that, in effect, acknowledge that man-made emissions of greenhouse gases trigger climate change: The Sense of the Senate spells out that action should be taken to reduce, stop and reverse climate change through market based mechanisms, but that these actions should not bring any undue burden on the American economy, its economic growth rate and employment levels.

To most Europeans this may sound like wishful thinking. The effect of the Kyoto protocol clearly affects the economies of European countries with tradable quotas ranging between EUR 18-24 per tonne of CO2. The power producing industries have been especially vocal about rising costs an production spill-over into countries that did not sign the Kyoto protocol.

The Kyoto protocol has been a bone of contention ever since it was introduced to―and ultimately rejected by―the US government. Complaints from Capitol Hill to the White House focussed on the notion that the treaty would hit US economic development the hardest of those states targeted by the treaty. US complaints also centered on the notion that developing nations would get a free ride to pollute under Kyoto.

Both reasons are have been seen by experts as valid, but the US shunning of the treaty has been taken as one more sign of US ignorance to international legal treaties and the UN-system in particular. Likewise, the administrations of George Bushes senior and junior and many other republicans have dumped cold water on climate change as pseudo-science.

Nonetheless, the Senates energy bill seemed at least to approach some of the goals proposed by Kyoto.

Some Senators, notably James Inhofe R-Oklahoma and Larry Craig R-Idaho seem to constitute a dwindling tribe of climate change skeptics within their party and have begun to swing their view toward the possibility that industry is causing changes in weather patterns. This seems to have cost them the support of major industry contributors to their respective campaigns, notably Exxon-Mobile.

During a climate change hearing last week, Senators learned suggestions in the proposed bipartisan National Commission on Energy Policy (NCEP) would only hurt the Gross Domestic Product growth nominally―80.6 percent compared to 80.0 percent from now until 2025.

The situation is reminiscent of the innovative efforts complete by American researchers to produce fuel-efficient cars in the 1980s. Once the immediate crisis was out of sight extended funding for commercialize prototypes dried up. The development teams and know-how were quickly absorbed by Toyota and Honda.

The McCain/Lieberman Climate Stewardship Bill contained a cap and trade regime similar to the Kyoto agreement. It suffered a slow death this summer with lowered support than last time is was proposed.

The most likely option now is the proposal by the NCEP, which forwarded a cap and trade system with a safety valve set at 7 US dollars per ton of CO2. The safety valve means that any CO2 emission reduction that would cost more that 7 dollars should be shelved. Canada has a similar safety valve system. Compared with the trading prices on CO2 emissions in Europe, the NCEP version is relatively low.

So what can the world expect of the coming hearing? The American economy needs to enhance it overall efficiency and lower its energy dependency and intensity. This might affect large corporations and consumers. As noted by Newsweek recently, perhaps very expensive gasoline is the only factor that will alter the choices of consumers. The current administration is unwilling to use command and control mechanisms, although patchy federal response to natural disasters could serve as an illustration of the pitfalls of market-based non-intervention.