WASHINGTON—A US Senate hosted symposium of national scientific academies, Group of Eight representatives, and corporations called on the Bush administration to acknowledge that climate change is a fact. 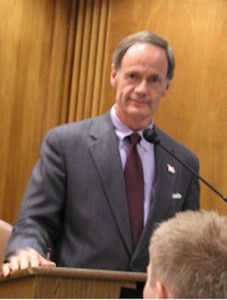 This new pressure from the Senate-hosted symposium is bound to put more pressure on the Bush administrations dismissive policy on greenhouse gases as the cry was coming not only from the scientific community—whose findings the republican administration has routinely brushed off—but from the very corporate sector that the administration has said it wished to protect with its laissez-faire climate politics.

The debate has also expanded beyond partisan politics, as Senators and Congressmen from both sides of the aisle put their combined muscle into pressuring the White House to take a hard look at the fact of climate change.

The June 9th symposium demonstrated to interested senators, congressmen and Capitol Hill staff that there is mounting evidence for climate change. Bellona Web attended the Symposium where scientists from Canada, Norway and the United States were in unanimous agreement that the climate was undergoing changes humanity has never had to grapple with. The symposium was organised by the Environment and Energy Studies Institute (EESI) and the Norwegian Embassy. 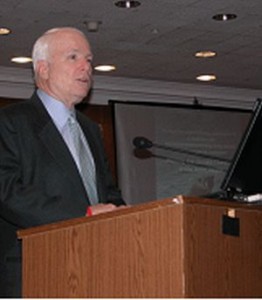 Beyond partisan politics
Arizona Republican Senator John McCain, who is co-sponsoring the Environmental Stewardship Act (ESA) bill with Connecticut Democrat Joseph Liebermann, called for action against climate change from the United States. They were joined by
Delaware Democrat Thomas Carper, and Marylands Republican Congressman, Wayne Gilcrest, who are co-sponsors of the ESA bill.

The Arctic is like a canary in the coal mine for climate change, McCain told the symposium, referring to the fragile and deteriorating Arctic climate as an indicator of how far the climate has shifted due to greenhouse gasses.

All presenters at the Senate symposium mentioned that corporate America—represented by companies such as DuPont, Cinergy, and Baxter International—recently made statement indicating they will incorporate climate emission reductions in their future business strategies.

Carper spoke of his recent talks with UK Prime Minister Tony Blair. Carper said he had briefed Blair how to persuade US President George Bush to take action on climate change.

Carper said he called on Blair to remind the US President that even Blairs own scientific advisors acknowledge the dramatic impact of human industry and transportation on the climate. Carper said that Bush owed Blair for putting the UKs head on the international political chopping block by unflaggingly supporting the US led invasion of Iraq.

But Blairs apparent request for a political quid pro quo had no visible effect. During their joint Press conference in Washington, DC on June 8th, Bush made no mention of fighting climate change.

This is not surprising if, as the New York Times reported on June 8th, the White House Council for Environmental Quality has distributed memos among its staff to purposely pad commissioned studies on global climate change and water down conclusions to paint a less dire picture.

The Council for Environmental Quality was meant to be a watchdog and assure that the President got timely and precise access to environmental information has become a censor downplaying important information with serious policy implications, said a repesentative of Greenpeace USA, which, as an organisation, obtained copies of the White House memos and passed them on to the Times.

When asked to comment on the allegations, McCain said wryly. I am shocked.

The White House offered no comment on the New York Times article.

Blair is widely expected to revisit the topic at the coming G-8 conference in July.

The up-coming US Energy bill debate on the Hill
At the Senate symposium, McCain said the debate over the US energy bill later this month will include issues like oil drilling in the Arctic, climate change, research funding, tax breaks for companies pursuing renewable energy sources, and the expansion of nuclear energy. By including nuclear energy, McCain was apparently trying to avoid torpedoing his ESA bill, which many analysts think will sink if it does not include a concession to the nuclear industry.

A nuclear industry lobbyist that spoke with Bellona Web at the symposium said: The environmental groups will have to make up their minds. Do they want to follow a purist approach, or acknowledge that nuclear energy is a necessary part of the energy mix?

It is Bellonas opinion, however, that until a failsafe method of storing highly toxic spent nuclear fuel is found, money poured into supporting the international nuclear industry is best spent on researching and putting into practice renewable sources of energy.

Taking action on climate change—A leap of faith?
Maryland Congressman Wayne Gilchrest, co-chair of the House Climate Change Caucus, provided the symposium the following analogy about how much certainty it would take to act on the science that has already been done on climate change: Would you step into an air plane if it had a 10 percent chance of falling down? Humans make a lot of decisions on less than 100 percent certainty. Politicians on Capitol Hill make sweeping policies on the future economy with a very low degree of certainty.

Dr James E. Hansen, Director of the NASA Goddard Institute for Space Studies in New York has earlier provided the administration with some somewhat soothing solutions to global warming.

Hansen told the symposium that the earth itself is out of balance. It accumulates heat from the sun equivalent to 1 watt pr square acre. The Goddard Institute had made calculations that reduced emissions of other climate gases such as soot, nitrogenmonoxide, methane and other gasses could reduce global warming as well as improve the air quality and health for millions of people.

This finding will carry policy implications for these short lived climate gases. But the rest of what Hansen had to tell the symposium was not comforting.

The earth will, on average, become a 1/2 degree Celsius warmer with the emissions already in the pipeline. If the temperature rises one degree, we will enter into a phase that is new to mankind. This kind of climate has not been on the planet in 100,000 years, he said.

Questioned by Carper on when it might be too late to bring climate change under control, Hansen responded dryly: By one degree increase we are in trouble.