The watchdog group, Global Witness, published the report “Overexposed” on April 23, that investigates the investments oil and gas will be making over the following years. What they concluded is that these sectors are not only putting their investors at risks but also the Paris agreement goal of keeping the planet below 1.5-2°C. 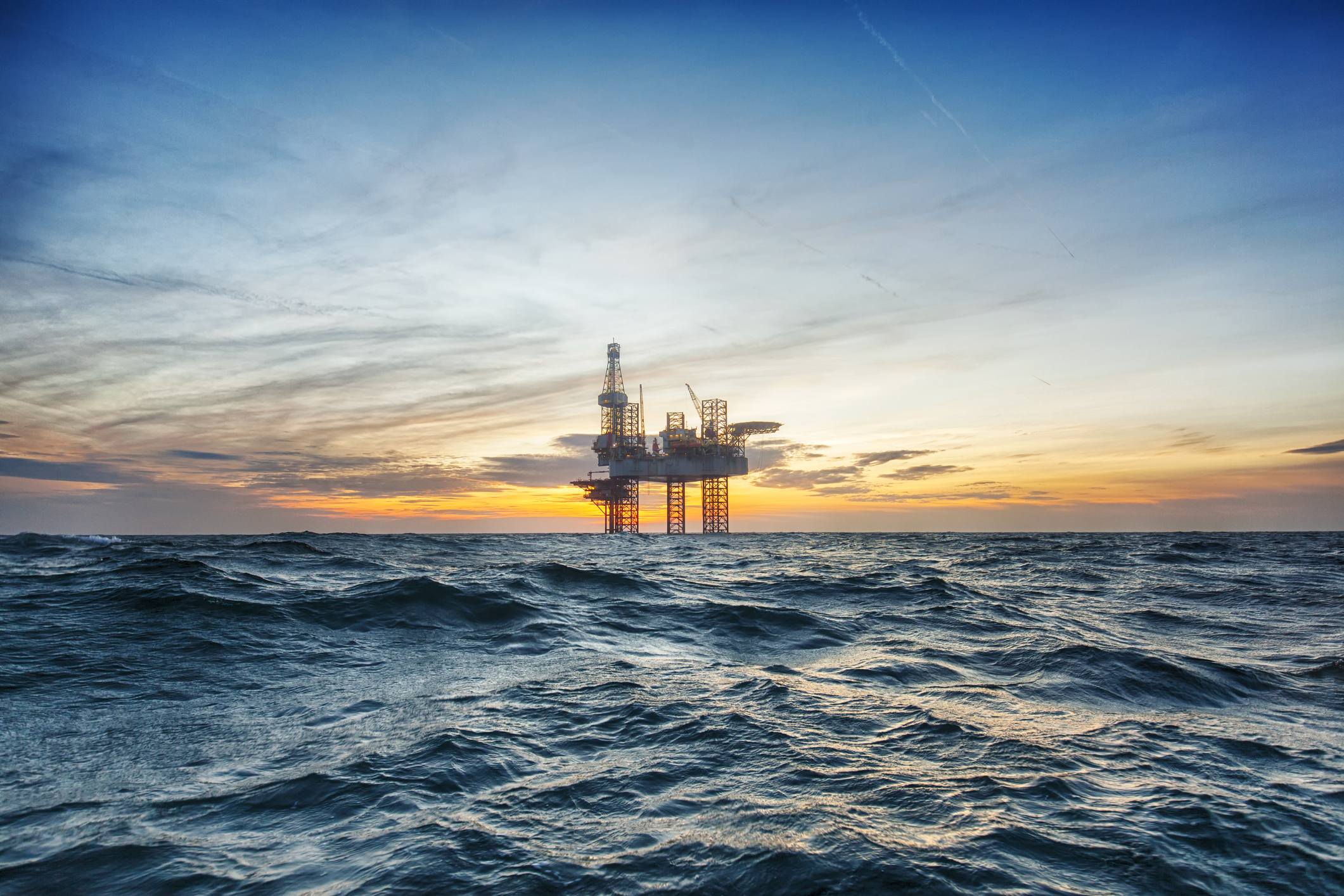 The oil and gas industry, with companies like Shell, ExxonMobile, and many more are ‘speaking out’ about climate change. However, it’s clear that while they can ‘talk the talk’ they certainly do NOT follow through with their actions.

This year, Shell’s CEO, Ben van Beurden, spoke about the environment, stating “I do not believe the world is moving fast enough to tackle climate change” and that he was working on making sure that Shell’s business was in harmony with the Paris Agreement by diversifying its portfolio to become less carbon intensive (i).

Despite Shell and the remaining oil and gas companies claims to ‘positively respond to climate change,’ they are now planning on investing trillions of dollars over the next decade extracting oil and gas from existing fields as well as developing new ones (iii). Their actions are in direct contradiction with their previous statement.

The watchdog group, Global Witness, published the report “Overexposed” on April 23, that investigates the investments oil and gas will be making over the following years. What they concluded is that these sectors are not only putting their investors at risks but also the Paris agreement goal of keeping the planet below 1.5-2°C.

Who, Where and How Much?

Since 2014, capital expenditure (Capex) for oil and gas has dropped by a third due to slumps in oil prices. However, it is predicted that Capex will rise by 85% over the next decade, leading to $1 trillion for Capex per year (iii). This amount of money could be effectively used to transition the oil and gas industry to a more sustainable source of energy, like renewables, that would allow them to continue to grow their business. Furthermore, it would align with their statements to act against climate change.

Unfortunately, and at a great cost to the GHG emissions, oil and gas companies are planning to use two thirds of their Capex to establish new gas and oil fields where development has not been started yet and where the investments have not been sanctioned. Five of the ten largest investors for these new fields are oil and gas majors, and they are led by ExxonMobil, Shell and Chevron.

Major capex projects that are predicted to be accepted in new fields over the next decade include the Vaca Muerta shale in Argentina, US domestic shale expansion, , the Kashagan oil field in Kazakhstan and the Yamal megaproject in Russia (iii). 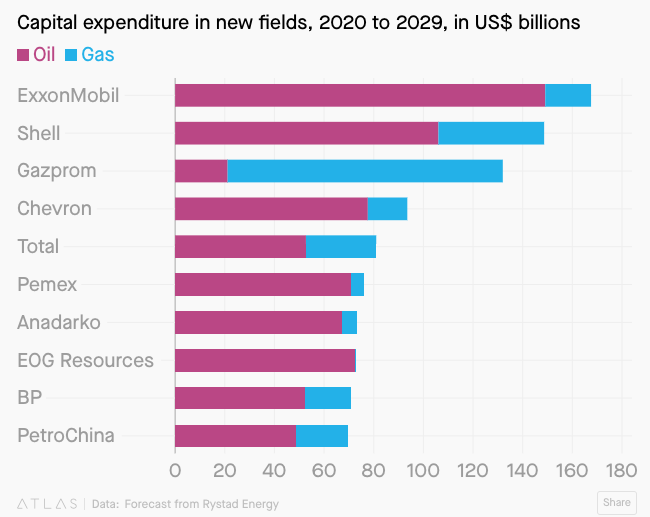 Oil and Gas ‘Justification’ for these New Projects

The question is now, where does oil and gas get the confidence to pull such a reckless and dangerous stunt? Well, they are presenting unrealistic assumptions to justify the creation of these new wells. Investors, in particular oil and gas, are creating scenarios to assess risks, but they are underestimating a lot of factors.

Their scenarios are based on over-reliance on technologies like Carbon Capture and Storage (CCS), Carbon Dioxide Removal (CDR), and Bioenergy with Carbon Capture and Storage (Bio-CCS). While these technologies are supported by the IPCC and seen as vital to mitigating climate change, they are not meant to be used to allow business to continue as per usual (ii). Rather they are meant to address the current GHG emissions as we transition to a carbon-neutral world.

CCS, CDR, and Bio-CCS  are all necessary for reducing GHG emissions. They are different methods that can be applied to prevent -or remove CO2 from the atmosphere, and CCS and Bio-CCS are necessary components in three of the four pathways presented by the IPCC regarding climate change.

In two of the four pathways where we stay below 1.5°C, these technologies are applied along with a decrease in consumption patterns or transition to new energy methods. In the fourth, CCS and Bio-CCS are applied along with the normal modes of consumption and energy methods, however the 1.5°C target is likely to be overshoot, by quite a bit (iii). We would have to live in a world with serious climate change.

The two graphs below illustrate for both oil and gas, how the new and existing fields align with the IPCC pathway for 1.5°C. 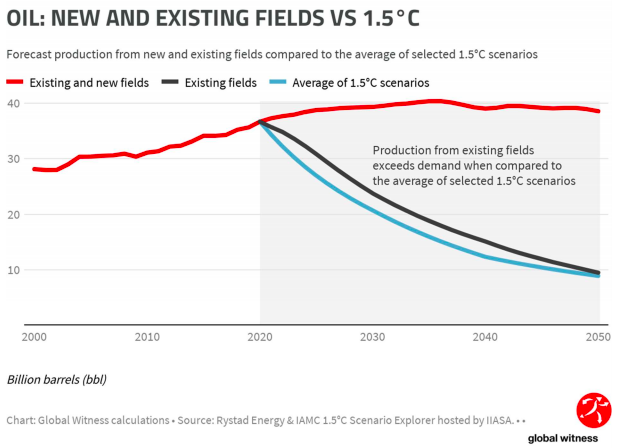 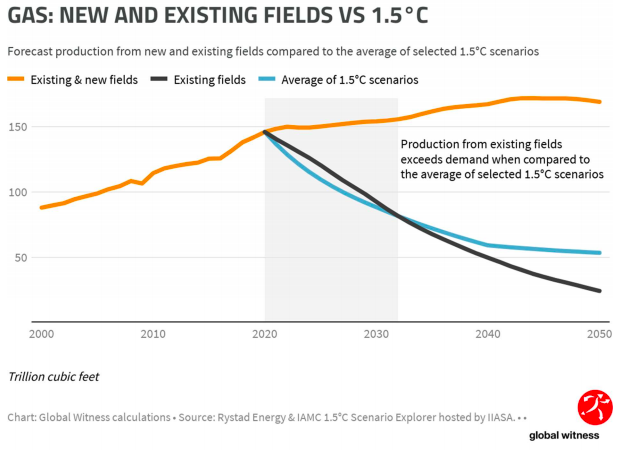 CCS, CDR and Bio-CCs are not up to the task that the oil and gas sectors are presenting. In an analysis of Shell’s 2°C Sky Scenario done by Carbon Tracker, they placed the burden of emissions reductions primarily on CCS.  This would require about 10,000 large-scale CCS facilities to be built to capture and store these emissions. For this to happen more than one CCS facility must be built every day for the next 50 years (iii). Momentarily, there are only 2 operational CCS facilities in the power sector. The ability to scale is not feasible and the scenarios presented by oil and gas are extremely unrealistic and misleading.

Reality of these New Projects:

For oil and gas to continue with this ‘business as usual’ pathway is a huge risk to everyone. Not only are investors going to be suffering later from these actions, but also the climate.

To begin, investing in these new wells without CCS, CDR, and Bio-CCS being scalable to this huge size will accelerate the already fast pace we are going towards a climate warmer than 1.5°C. With the increasingly costly climate changes, the government and people will take hard measures to slow it down, meaning that Oil and Gas would likely have to shut down their productions and slow down their selling.

Investors would have overinvested, and trillions of dollars will have been wasted, which could have been used for more viable, sustainable solutions. This loss would not only impact the sector, but they would impact the global economic system.

Oil and Gas are purposefully misleading investors and promoting scenarios that are painfully unrealistic. Rather, they should “align their capex planning with scenarios that limit warming to 1.5°C without reliance on unrealistic levels of future carbon capture and removal.” Investors, in turn, should now require oil and gas companies to explain how their material capex investment are aligned with the Paris goals.

iii. “Overexposed: 1.5°C and the Risks of Overinvestment in Oil and Gas.” Global Witness, 23 Apr. 2019, www.globalwitness.org/en/campaigns/oil-gas-and-mining/overexposed/.