Vis menyen
Bellona.org > Latest News > Transport > Electric mobility > How Bellona came to be at the heart of the EU policy making arena: The story of Bellona Europa

How Bellona came to be at the heart of the EU policy making arena: The story of Bellona Europa

The independent non-profit organisation Bellona, founded in 1986, aims to meet and fight climate challenges through identifying and implementing sustainable environmental solutions. Some of Bellona’s best-known accomplishments include its contribution to the clean-up of industrial toxic waste dumps; initiating Norway’s electric transport revolution commencing by importing the country’s first modern electric vehicle (EV) in 1989 and fostering the introduction by the government of the first EV-friendly policies in 1990; as well as its significant contributions to the policy progress and deployment of Carbon Capture and Storage (CCS) in Norway, Europe-wide and beyond.

Published on November 24, 2016 by Bellona Europa

The Bellona Foundation was initially created in an occupied room on 16 June 1986, about seven weeks after the Soviet Chernobyl nuclear accident.

“We were welcomed with much skepticism, but that was at a time when the environmental battle went from a battle for a clean nature to a wider environmental one” says Bellona’s Founder and President, Frederic Hauge.

Six young men started their own independent foundation, due to their strong environmental commitment and willingness for greater flexibility and efficiency in comparison to the rest of the established environmental movement at the time. The organisation’s name was chosen randomly by looking into an encyclopedia. At the letter ‘B’, the name of a Roman war goddess, Bellona, was found.

Today, the independent non-profit organisation Bellona aims to meet and fight climate challenges through identifying and implementing sustainable environmental solutions. Some of Bellona’s best-known accomplishments include its contribution to the clean-up of industrial toxic waste dumps; initiating Norway’s electric transport revolution commencing by importing the country’s first modern electric vehicle (EV) in 1989 and fostering the introduction by the government of the first EV-friendly policies in 1990; as well as its significant contributions to the policy progress and deployment of Carbon Capture and Storage (CCS) in Norway, Europe-wide and beyond.

Why is there a need for an office in Brussels?

In 1994, the very same year Norway voted ‘No’ in the referendum on EU membership, Bellona opened its offices in Brussels. Despite not being an EU member, the EU’s environmental legislation and directives are highly relevant for Norway through its membership in the European Economic Area (EEC), with as much as 80-90 % of Norway’s environmental legislation being shaped and decided upon in Brussels. 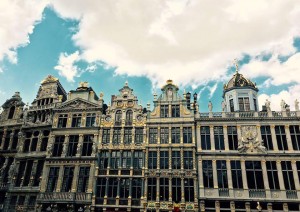 Perhaps even more important, for many key environmental challenges – the greatest of which is climate change – national borders are irrelevant. Those are shared burdens, and Bellona firmly believes that those need to be handled in functional multilateral frameworks. The EU has for many years been a leading force in international climate and environmental action; hence for Bellona, Brussels is an obvious political arena in which to partake.

One of the most important drivers for Bellona’s establishment in Brussels therefore was and remains to actively monitor and influence EU legislative processes in the fields of climate, energy, environment, transport and other related policy areas so as to safeguard the health of our planet and the people living on it.

How it all started

Initially, Bellona Europa dedicated most of its efforts to tackling nuclear waste. In particular, Bellona played a key role in raising awareness of the horrific conditions at the Kola Peninsula among EU policy makers. Bellona was accompanied for a visit to the Kola Peninsula by former European Commissioner for Environment, Ioannis Paleorkrassas who was shocked at the conditions and promised enhanced EU efforts to assist in cleaning up the mess. Shortly after, thanks to Bellona’s awareness-raising efforts, the European Parliament strongly urged the European Commission to implement measures at Kola. This led to the establishment of substantial funds and a Master Plan for nuclear clean-up adopted in London in 2004.

Bellona Europa has since then also been actively involved in EU policy making on a broad range of environmental issues, including e.g. electronic waste and engaging the European Parliament in Arctic policy with a view to ban the use of heavy fuel oil and limit local emissions of black carbon, as well as other Arctic environmental concerns.

Another key policy battle in which Bellona has been instrumental in Brussels was the debate on stricter safety rules for the offshore petroleum industry in Europe in the aftermath of the Deepwater Horizon accident in the Mexico Gulf in 2010, which was won despite fierce resitance from European oil and gas companies, not least those in Norway and the UK. Bellona continues to highlight the disastrous consequences of Deepwater Horizon that continue to cause suffering, lest it be forgotten. Should something similar happen in the dark, cold, remote and ecologically sensitive waters of the Arctic, the consequences would be beyond repair.

Pioneering CCS on the EU agenda

Over the course of the years the office’s focus shifted towards climate change mitigation technologies, including energy efficiency, renewable energy and CO2 Capture & Storage (CCS).  Back in 2008 Bellona published its comprehensive report “How to Combat Global Warming”, which emphasised how available and up and coming technological solutions can help us achieve CO­2 emission reduction of 85% by 2050 globally. The report’s findings closely reflected the 2007 4th Climate Change Assessment Report (AR4) of the Intergovernmental Panel on Climate Change (IPCC), in urging the need for much greater and immediate reductions in CO2 than earlier estimated. Bellona’s study illustrated the enormous potential of CCS to remove as much as half of Europe’s CO2 emissions and the growing risks of failure linked to the non- or delayed deployment of CCS technologies.

A billion deal for CCS deployment

One of Bellona’s biggest victories on the EU policy making arena was fostering the agreement of the EU Council of Ministers and the European Parliament in December 2008 on a financial mechanism to support CCS with billions of €. A tough fight by Bellona and its allies in the Zero Emissions Platform (ZEP) resulted in the introduction of an EU funding mechanism for CCS, the so-called NER300, as part of the EU climate and energy package in 2008.

The proposal to earmark allowances in the EU Emission Trading System (ETS) to be spent on demonstration projects for capture and storage of CO2 from power plants and industry, originated from Bellona, its British sister organisation E3G and a few other key ZEP members, as well as Chris Davies, Member of European Parliament (MEP) for the UK Liberal Democrats.

Another high level position in the EU

Since then, Bellona Europa has been fighting attempts at installing new unabated fossil fuelled energy generation capacity in Europe, be they coal or gas. In 2011, Bellona’s Hauge was appointed as member of a new expert group to advice the EU Commissioner for Energy, Günther Oettinger, on how the Union can best reduce its CO2 emissions stemming from the energy sector by at least 85% by 2050.

As member of Commissioner Oettinger’s advisory group, Bellona succeeded in including a statement that all fossil fuels would be required to apply CCS from 2030. Until then, the focus had been solely on coal, but Bellona’s arguments that without planning for CCS, all investments in fossil gas infrastructure and capacity would entail a lock-in of emissions.

Bellona has moreover raised the now (following the 2014 IPCC 5th Climate Change Assessment Report AR5) increasingly mainstream topic of negative emissions and biomass with CCS (Bio-CCS) on the international scientific agenda as well as the EU policy making agenda; successfully made the case for the necessity of CCS to reconcile the energy security concerns of Central and Eastern Europe with EU climate ambition; and for a similar and even more critical reconciliation of EU industrial policy targets with long-term climate targets.In October 2014, Bellona played an instrumental role in ensuring the European Council’s inclusion of provisions for CCS in the EU 2030 Climate & Energy Framework, without which it would have been extremely challenging to justify ambitious EU action in the field in the next decade.

CCS technology has continued to be at the core of Bellona Europa’s efforts here in Brussels. CCS for industrial processes, making up ~¼ of EU (and global) emissions, remains one of Bellona Europa’s main focus areas, with an emphasis on building a broad societal alliance for action.

In 2016 Bellona’s long-time ambition to have a viable and large-scale CCS facility in Europe came much closer to becoming reality. Thanks to its consistent efforts the Norwegian Ministry for Petroleum and Energy on 30 September 2016 confirmed the Norwegian government’s decision to progress three CO2 capture projects from the feasibility study to the FEED phase, and to develop a shared CO2 transport and storage solution for those project, based on shipping of CO2 to a terminal at Norway’s west coast, linked by pipeline to a geological permanent CO2 storage site offshore. 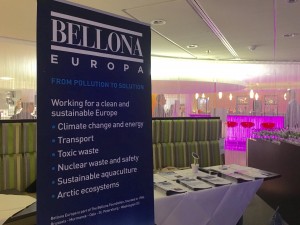 “The decision marks a historic milestone and an end to a vicious cycle that has been putting on hold progress towards the commercialisation of CCS technology in Europe” comments Jonas Helseth, Director of the Bellona’s EU Office in Brussels.

“By going for the shared infrastructure solution which we have been promoting for years, this opens for conversations far outside Norway, with ship transport of CO2 being an easily implementable option for industrial emitters all around the North Sea and beyond”.

Last but not least, over the past two years Bellona Europa has intensified its efforts in the field of electro-mobility on the EU arena, while serving as a bridge to Norway in exporting best practices and lessons learnt in overcoming barriers to electro-mobility. Bellona activities on electro-mobility in Brussels include active memberships in various EU fora, such as the Platform for Electro-Mobility and the Commission’s expert group Sustainable Transport Forum; the hosting of events; engagement with EU actors and advocacy efforts on EU legislation on electro-mobility; and regular publications covering policy and technological developments on the topic.

Addressing interoperability issues and ensuring a coordinated roll-out of an EU-wide electric recharging infrastructure have been high on Bellona’s agenda over the past year. The Platform for Electro-mobility, of which Bellona is a founding member, recently launched a new paper on ‘Accelerating Electric Recharging Infrastructure Deployment in Europe’. Having acted as chair of the Platform’s infrastructure working group, Bellona has brought together all of its 24 members in producing this well-timed paper: which comes as EU Member States are delivering national plans for their implementation of the Alternative Fuels Infrastructure (AFI) Directive and just two days prior to the release of the Commission’s Energy Union Winter Package.

Read more about the Bellona Foundation and about its international offices here.