Late yesterday evening, Oslo City Council concluded that they want to establish carbon capture facility at Oslo’s Energy Recovery (EGE) plant at Klemetsrud. With such a facility the capital of Norway can become a world leader in environmentally friendly energy recovery from sorted waste while delivering CO2-negative power and district heating to the city. 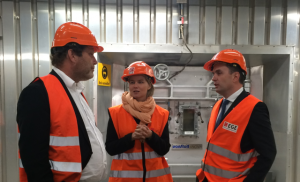 Bellona is encouraged to see our partners at the Oslo energy recovery agency EGE moving ahead with this project, which Bellona has closely supported from the outset.

– Oslo can take a leadership role in the development of technologies related to carbon capture from waste combustion plants, and help lift the processing of sorted waste to a new level, the Governing Mayor of Oslo, Stian Berger Røsland (Conservative party) said.

The Norwegian environmental NGO Bellona Foundation, an advocate for Carbon Capture and Storage technology since the 1990s, has been working for years with this facility.  They celebrate this decision as Klemetsrud could become the first carbon-negative installation in Europe.

– This project, with potential to achieve carbon negative emissions, brings new momentum to European efforts on CCS. We hope that the project can be realized fast as we need to show politicians it’s possible to do a lot more. Seeing is believing, Bellona President Frederic Hauge said.

As biomass takes up CO2 when it grows, by capturing the CO2 resulting from its combustion excess CO2 is removed from the atmosphere.

The IPCC is very clear that such carbon negative solutions will also be needed on a massive scale to keep global warming below 2 degrees.

The Klemetsrud plant is one of Norway’s largest land-based industrial sites and has a large source of CO2 emissions, with annual emissions of approximately 300,000 tons. Removing these emissions will be a significant contribution to achieving the Oslo climate targets for 2030 and 2050.   Oslo’s Environment Commissioner Guri Melby (Liberal party) believes carbon capture is an important climate action, also in an international context.

Oslo City Council wants the Klemetsrud facility to become a national industrial pilot for carbon capture, and will make the facility available as an international test facility. The facility has continuous operation throughout the year with a long-term operation perspective, and is therefore a very good base for further development of carbon capture technology.