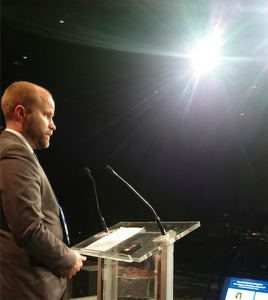 Two years ago, it was in Kyoto, Japan, and before that. In a way, the locations reflect where the technology momentum can be found. Last time it was East Asia, not least in Japan which was looking into alternatives for its large nuclear capacity after Fukushima.

In 2010, it was in Amsterdam, at a time when everyone thought Europe would take the lead. Since then, Europe has seen its Emission Trading System fail to deliver any positive outcomes in terms of long-term investments in low-carbon technologies, and the NER300 auction grants – being based on the ETS allowance price – equally failed to deliver projects as promised, with the possible exception of White Rose in the UK.

This time around, North America has stolen the limelight completely. The nearly 1,200 participants at the conference all have felt the energy boost induced by last week’s event in Saskatchewan, Canada, where Boundary Dam, the world’s first power plant with full-scale CCS opened. Next year, we’ll see the opening of another and even larger project with Kemper in Mississippi, US, and Texas might not follow too far behind. SaskPower’s Mike Monea was the obvious man for giving one of the conference’s keynotes, a well-deserved honor after his years of being the driving force behind Boundary Dam. Although the project from an environmental perspective might not be perfect, one can’t overestimate the effect it has had (and is having) in showing the world that CCS is a real-world solution, which can deliver huge emission reductions now.

We just need to get the financing right. Monea’s technology and solution-oriented enthusiasm is sorely needed – notably in the current atmosphere of pessimism in Europe – and while it must have been painful for Norwegian conference sponsor Gassnova to have failed to show the same leadership, the message they should take home to Oslo must be clear: this is NOT as challenging and complicated as Statoil and others would have us believe.

As the DOE’s Julio Friedmann said in Regina last week, we need to stop talking about CCS costs, as it’s really about finance. All emission-reductions have high upfront cost. CCS is a technology with huge scale and huge impact, whereas other technologies are often easier to finance as their magnitude is smaller. The true cost is the societal cost of doing nothing about the enormous global emissions from coal, gas and not least from industrial sectors like steel, cement and chemicals, for which CCS is the only real solution. The Intergovernmental Panel on Climate Change (IPCC) has made it clear that without CCS, and its combination with biomass, limiting global warming to 2 degrees Celsius – thus avoiding the most catastrophic scenarios – will be beyond reach. Not coincidentally, when I took part in today’s closing panel for GHGT 12, Bio-CCS was my focus.

We need to get rid of the notion that CCS is about keeping coal alive. Anyone who’s read the latest coal reports from the IEA and others realize coal is not going to disappear as the world’s “favorite” energy source anytime soon. So CCS uptake is desperately needed.

But even if we must hope to turn the coal tide soon, CCS will remain crucial. In Europe and elsewhere, legislation for increasing renewable energy’s share in the mix has led to sorely needed investments in wind and notably photovoltaics (PV, solar energy), but above all to an increase in biomass use. The positive climate impact of that will largely depend on the extent the biomass is sustainably sourced, but in any case, it could be doubled by combining it with CCS, potentially removing large amounts of CO2 from the atmosphere over time.

CCS is not an alternative to increasing the renewable share: We desperately need to do both, and we’re already severely delayed in acting. Petty infighting about technology choices can’t be allowed: We need to do all of the above, and do it using an intelligent, efficient system-based approach.

Monea, a former oil-driller from the Canadian wilderness, deserved this moment of fame more than any. Five years past, few would have expected tar sand rich Canada to be the first to deliver a project proving for good that CCS can decarbonize coal utilization on a massive scale. Proving a technology the scientific world increasingly points to as mankind’s only hope for countering disastrous climate change.

Last night, at a perfectly cliché-like Texas ranch BBQ – hardly the most eco-friendly choice – with a band wearing cowboy boots and matching Stetsons, Mike followed that giant leap for mankind with quite a few impressive steps for man [sic] on the dance floor.

Scientists and industrialists from across the world all felt the power of Seeing is Believing – a slogan Bellona’s lived by for many years – while explaining their work on smaller and bigger incremental and monumental improvements to CCS. As in Kyoto, I had the pleasure to chair the session on Bio-CCS, and this time 70-80 people found their way to the session, twice the attendance of 2012. Moreover, I chaired a session on CO2 Capture and Utilization, in which highly promising solutions for capturing CO2 in cement and recycling it for replacing petro-based chemicals were discussed. In a world where emitting CO2 remains by far economically more attractive than getting rid of it, such product-oriented solutions can serve incentives for capturing emissions until emission pricing makes permanent abatement in geological storage attractive.

Last but not least, a major reason for my attendance here in Austin was the annual meeting of environmental NGOs promoting CCS. A growing group, there are still too few with the courage to speak up for this crucial technology, so there’s a clear need to work together and learn from each other.

A founding member of the ENGO CCS Network and the first NGO to put CCS on the agenda more than two decades past, the case for Bellona’s presence was obvious. Two days of fruitful discussions led to agreement on a coordinated approach toward next year’s climate summit COP21 in Paris with a view to secure commitments for CCS action.

Knowing the UNFCCC process better than most, Bellona harbors qualified doubts that such commitments can be secured unilaterally, but if a number of key emission-intensive countries were to step up, it would make a huge difference. Industry currently, certainly in Europe, feels little or no pressure to act. The policy of carrots and a weak ETS has not delivered. It’s time to bring out a big fat stick.

Meanwhile in Europe, Bellona Europa is invited to contribute to two relevant UN-led processes on CCS at meetings in Geneva (UNECE) and Bonn (UNFCCC) on 20th and 21st October. There currently appears to be a very weak link between the UN approach to the issue and the scientific sense of urgency. The case for encouraging key governments to step up and leverage that urgency is crystal clear. Signals from several high-level government representatives we’ve spoken with over the last few days have been promising. To be continued…

Jonas Helseth is the director of Bellona Europa in Brussels.