The UK Department of Energy and Climate Change (DECC) has launched a consultation to seek views on its proposed approach to the regulations that will fully implement the Emissions Performance Standard (EPS). The EPS applies to all new fossil fuel electricity generation plants that are above 30MWe and have received development consent after 18th February 2014. Under the rule, all new coal-fired power stations can only be built if they have CO2 Capture and Storage (CCS) technologies. 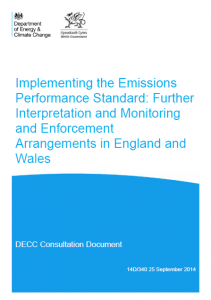 An EPS dictates a maximum allowable release of a pollutant, such as CO2, during the production of a commodity such as a tonne of steel or MWh of electricity. This places a clear obligation on the polluter to alter their production process or install pollution abatement technology to reach the mandated performance standard. At present there is no EU wide legislation or sufficient CO2 price signal to dissuade investment or reinvestment in CO2­-intensive generation capacity. Under the existing framework of a generally unenforced CO2 capture ready requirement and due to a poor outlook for the CO2 price, investments in CO2-intensive generation capacity are little affected by EU climate policy. This is resulting in investments now leading to carbon lock-in and eventually costly stranded assets.

An EPS would not replace the carbon price but would complement it by providing a safeguard that encourages investment flows only to energy resources that can contribute to achieving EU decarbonisation objectives. In its report entitled Driving CO2 Capture and Storage in the EU: New Policies, New Perspectives Bellona calls for a sufficiently strict EPS in Europe to drive CCS deployment. An EPS for existing plants could be set in line with existing timetables under the Industrial Emissions Directive, allowing newer, more efficient and flexible plants to operate for a limited timeframe, but removing older, inefficient and inflexible plants from the system.

The DECC consultation invites opinions of interested stakeholders on some of the aspects of the EPS which became law as part of the Energy Act 2013 and is part of the measures that make up the Electricity Market Reform (EMR). In particular, aspects relating to the proposals for monitoring and enforcement of the EPS as well as the operation of the ‘time-limited exemption’ from the EPS for CCS projects are covered by the consultation.

The deadline for submission of views to the consultation is 6th November 2014.