The Deep Decarbonisation Pathways Project (DDPP) released its interim 2014 report which shows what actions the major CO2-emitting economies need to implement to attain the ‘deep decarbonisation’ needed to limit global climate change. The report concludes that preventing catastrophic climate change is possible; however this would require a profound transformation of energy systems as well as a heavy dependence on low-carbon technologies, such as CO2 capture and storage (CCS). 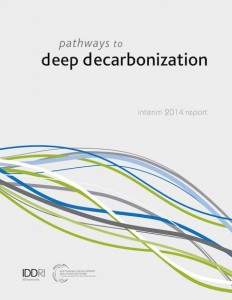 The DDPP, a collaborative initiative of the Sustainable Development Solutions Network (SDSN) and the Institute for Sustainable Development and International Relations (IDDRI), aims to show how individual countries can transition to a low-carbon economy and how the world can meet the internationally agreed target of limiting the increase in global mean surface temperature to 2°C. The report calls for a significant transformation of energy systems, also referred to as ‘deep decarbonisation’, the ultimate goal of which would be the phasing out of fossil fuel combustion with uncontrolled CO2 emissions. The only remaining fossil fuels would be in conjunction with CCS. Deep decarbonisation rests on three pillars, namely energy efficiency and conservation, low-carbon electricity, and fuel-switching. Even though the strategies adopted by different countries would vary depending on their resource endowments and public preferences, the above-mentioned three pillars are the common platform for pursuing deep decarbonisation in every one of them.

Director of the SDSN, Jeffrey Sachs said: “The world has committed to limit warming to below 2°C, but it has not committed to the practical ways to achieve that goal. This report is all about the practicalities. Success will be tough – the needed transformation is enormous – but is feasible, and is needed to keep the world safe for us and for future generations. One key message is to invest in developing the low-carbon technologies that can make a difference”.

The deployment of new low-carbon technologies to transform energy production and consumption patterns is key to achieving deep decarbonisation. In particular, the report highlights the importance of CCS and the need for accelerated research, development, demonstration and diffusion of the technology to make it more reliable, cost-competitive, and widely available in every country. It also predicts that in the long-term, the largest market for CCS systems will be found in the electric power sector where coal-burning plants constitute the greatest and most concentrated point source of CO2. Moreover, the findings call for net negative emissions in the second half of the century to offset overshooting of the carbon budget projected in a number of low-carbon scenarios, including some of the 5th Assessment Report of the Intergovernmental Panel on Climate Change. Attaining net negative emissions would in turn necessitate the integration of biomass energy with CCS (Bio-CCS), both as technologies for electricity generation and biofuel production.  Bio-CCS combines the dual challenge of large-scale biomass production and large-scale storage of CO2.

The report provides policy recommendations for 15 countries, representing 70% of global greenhouse gas (GHG) emissions and different stages of development. In Canada for instance, alongside intermittent renewables, the significant deployment of CCS would be required to facilitate large-scale switching to decarbonised electricity. The improvement of post-combustion CCS, for both electricity generation and industrial process applications should be prioritized. Moreover, Canada should develop and commercialize solid oxide fuel cells and other technologies, including pre-combustion capture, that either reduce GHG intensity or reduce the cost of CCS by producing a pure CO2 waste stream. The key recommendations for Indonesia, on the other hand, included equipping a significant fraction of gas plants and most of the remaining coal plants with CCS. For energy security and ease of access reasons, Indonesia will most likely continue to use its abundant coal resources for electricity generation. However, most of the plants will be equipped with CCS facilities to capture CO2 and store it in geological formation. Given the need for deep decarbonisation, CCS will also be used to reduce emissions from natural gas power plants. The storage is planned to take place in the abandoned and depleted oil and gas reservoirs. It is estimated that the volume of Indonesian depleted reservoirs could store around 11,000 million tonnes, which is more than three times the space required by the CCS scenario.

Bellona regards the findings of this report to be highly encouraging: it is still not too late for the globe to avoid disastrous climate change. It is clear that a wide suit of technologies and strategies will be needed to tackle the problem; simply picking favorites will diminish our ability to fight climate change and inevitably increase the likelihood of failure.