The report Tracking Clean Energy Progress 2014 examines global progress in the development and deployment of key clean energy technologies. It is found that emerging economies have stepped up their clean energy ambitions, but policy uncertainties stall momentum in OECD countries. 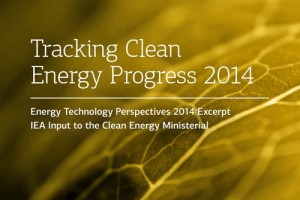 A main finding is that deployment of renewable power is accelerating in Asia and emerging economies. Emerging markets more than compensated for slowing or more volatile growth in Europe and the United States. China accounted for the lion’s share of new installations, becoming the first market in the world for both wind and solar photovoltaics. Asia as a whole deployed more than half of global solar photovoltaic additions in 2013.

Furthermore, the report finds that the unrelenting rise in coal use is fundamentally incompatible with climate change objectives. The two-degree trajectory requires a sharp decline in coal use in parallel with rapid development of carbon capture and storage (CCS). Coal is still the dominant energy fuel. Since 2010, the growth in generation from coal has been greater than that of all non-fossil sources of power generation combined, continuing a 20-year trend.

The report acknowledges that CCS is advancing slowly, due to high costs and lack of political and financial commitment. According to its findings, few positive major developments were seen in 2013, and policies necessary to facilitate the transition from demonstration to deployment are still largely missing. Still, eight large-scale CCS projects are likely to come on line within the next two to three years, which will bring valuable experience. Given the importance of fossil fuels for a long time to come, it is underlined that CCS is a critical component in the pathway to a sustainable energy system.

Specific recommendations to governments on how to scale up deployment of clean energy technologies are given in the report.