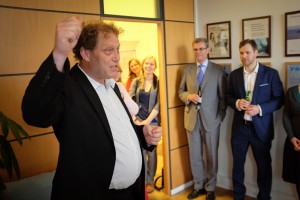 Helseth welcomed guests and encouraged all to consider the Bellona Europa ‘CV’, a paper that highlights some of the office’s achievements since starting work in 1994. In the same year, Norway voted no to joining the EU and as Hauge would later point out, Bellona’s work in Europe is done not as Norwegians, but as Europeans. “We may be ‘outsiders on the inside’, but the climate challenge affects everyone and that’s how we approach our work”, Hauge said.

The Ambassador contemplated on the two paths one can choose when explaining the EU to Norwegian stakeholders. There is the complicated way, of looking at intricate and elaborate processes and procedures. And then there is the simple way, of having a solid message. The Ambassador noted that if you have something solid to say, people and ‘the EU’ will listen. Bellona has most certainly always had something to say, the Ambassador concluded. Bellona Europa’s anniversary comes mere days before EU citizens elect a new European Parliament. Bellona Europe has therefore also prepared a policy brochure for new policy makers, outlining the centrality of CCS to solving the climate puzzle. Read more here. The Norwegian Ambassador, familiar with the challenge of balancing fossil use with climate objectives, also noted that a real solution to climate change that does not include CCS, is yet to be presented.

The IPCC Vice-Chair, Professor van Ypersele echoed these calls for CCS and also remarked on the importance of delivering solid messages. The IPCC can only base its reports on existing literature, and that literature has said with ever growing certainty that climate change needs to be tackled. The Professor therefore noted the importance of the work of organisations like Bellona, in delivering not only messages of gloom but also of solutions. Bellona was one of the first organisations to champion CO2 capture and storage (CCS), a technology which the IPCC has repeatedly said is essential to tackling climate change. The latest IPCC report also calls for Bio-CCS, the combination of sustainable bioenergy with CCS, to deliver negative emissions, another solution Bellona has championed. Bellona Europa has played an important role in showcasing to EU policy makers the role of sustainable and integrated solutions, moving our societies from pollution to solution. We thank all well-wishers and look forward to continue working with you all toward a more sustainable future.