Published on February 7, 2014 by Bellona Europa 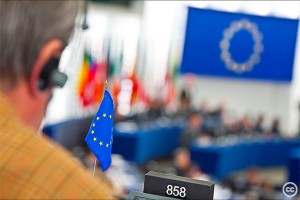 In the non-binding report, which was initiated in response to the Commission’s 2030 Green Paper of last year, MEPs voted for three EU targets: to reduce greenhouse gas emissions by at least 40% compared to 1990 level, for an energy efficiency target of 40%, and for a binding minimum of 30% renewable energy consumption. In comparison, the Commission’s proposal included an in-effect non-binding 27% renewables target and no energy efficiency target. The Parliament also wants to keep the Fuel Quality Directive, which the Commission’s proposal would see scrapped by 2020. Both institutions support a 40% emission reduction target, which is at the lower end of the 40-44% milestone indicated for 2030 in the 2050 roadmap. Although the report is non-legislative, it will feed into the Member States’ discussions of the White Paper at the energy and environment ministers’ Council meetings in early March.

The report was drafted jointly by the Parliament’s ITRE (industry, research and energy) and ENVI (environment, public health and food safety) committees. It was adopted by 341 votes to 263, with 26 abstentions. The amendment to make the renewables target binding on a national level was carried by a narrower 347 to 308 votes. The majority was formed by the liberal, green, sociality and democrat parties, with the no-votes made by the conservative groups, including the Parliament’s largest group – the European People’s Party. Both the MEPs responsible for the file in each of their committees are from the EPP, but the ENVI rapporteur Belgian Anne Delvaux rebelled against her group and voted in favour. Following the vote, Delvaux, said “If we have a broad energy mix with greater energy efficiency, this is the best option to reduce to reduce greenhouse gas emissions, to encourage new technologies and innovation, create jobs, and change our economies into greener economies. This is why we need three binding objectives.” The ITRE committee’s rapporteur, Polish Konrad Szymanski, withdrew his name from the report. Szymanski stated that “This result is not satisfactory” and later added that “Binding objectives on renewables and energy efficiency is not a flexible arrangement. We know well that member states and individual sectors have different capacities.”

The role of CCS

The paragraph of the report which addresses CO2 capture and storage (CCS), paragraph 91, passed through the plenary without amendment from the version passed in the ITRE/ENVI committee vote. This means the final report states [emphasis added]:

“91. Takes the view that carbon capture and storage (CCS) could play an important role  in reducing greenhouse gas emissions (as acknowledged in the Commission’s 2050 low-carbon roadmap and its Energy Roadmap 2050), at least for a transitional period, especially for energy-intensive industries; notes, however, the lack of public and private investment in this area; calls on the Commission to analyse the best way forward as regards the development of CCS technologies in the EU, and to propose appropriate measures within the 2030 framework in order to mobilise stakeholders and the necessary funding; stresses that both renewables and CCS have a role to play in the future EU energy mix and should not be regarded as being in competition with one another; asks the Commission, furthermore, to intensify exchanges of best practice and information with the US and Canada on CCS technology;”

CCS is also mentioned in the ‘Targets’ section of the report:

“9. Notes that decarbonisation paths will rely on differing shares of sustainable technologies in the Member States: renewables, nuclear energy, and carbon capture and storage if it becomes available in time; notes that the integration of a higher share of renewables will require significant extensions of transmission and distribution networks and additional dispatchable back-up capacity and/or storage capacity;”