President-elect Barack Obama rounded out the week by appointing head to the US Energy Department and Environmental Protection Agency who promise to provide a radical departure from the Bush Administration’s science paranoia and head-in-the-sand denial of global climate change.

Published on January 14, 2009 by Charles Digges

"We welcome the nominations of Steven Chu and Lisa Jackson. Both recognize the enormous challenge posed by climate change and the need to act now to do something about it." 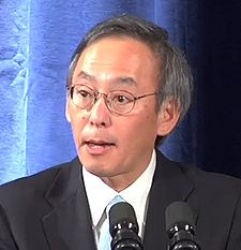 Chu of the Lawrence Berkeley National Laboratory – who similarly passed confirmation without a hitch – likewise promised to pursue the “best possible scientific analysis,” specifically in relation to the proposed and embattled Yucca Mountain nuclear waste repository in Nevada – opposition to which was a hallmark of Obama’s presidential campaign.

Appearing at his confirmation hearing before the Senate Energy and Natural Resources Committee, Chu was asked how he plans to approach nuclear waste management where the government’s preferred disposal site in Nevada is more than 10 years behind schedule.

Nuclear waste poses “very thorny questions,” Chu said, noting Obama has stated “very clearly” his opposition to the repository where the Energy Department is seeking a license to build disposal tunnels for more than 77,000 tons of radioactive material.

Nuke waste storage a priority – but should not hinder using nuke power
During his confirmation hearing Chu offered no endorsement of the DOE Yucca project, choosing instead to look beyond the programme to emphasise that finding a solution to the issue of nuclear waste storage would be a priority, including the possibility of joining with other nations that are exploring advanced methods to recycle nuclear waste.

Chu said those efforts should not hold up development of new nuclear power plants.

“I am very confident the Department of Energy with cooperation with other countries can get a solution to the nuclear waste problem,” he said in remarks broadcast on C-SPAN.

“There is a lot of new science coming to the fore, and I will look to use the best possible scientific analysis to try to figure out a way to go forward with nuclear waste disposal,” said Chu, who is 60.

“That will occupy a significant part of our time and energy.”

Obama’s nuclear strategy still unclear
Yet the stance of the Obama administration as a whole toward nuclear energy remains murky. Obama himself has acknowledged the role of nuclear energy in the US mix, but has devoted considerably more focus to the costs and insufficient science behind storing the waste.

Since taking the White House, Obama and his team haven’t offered any clearer clues about their plans for nuclear energy use, though analysts generally think that the Obama White House will not significantly impede the building of new nuclear plants.

Chu emphasizes energy independence – including nuclear
Chu, who shared a Nobel Prize in physics in 1997 for his experiments in cooling and trapping of atoms with laser light, promised senators during his confirmation hearing that he will aggressively pursue policies aimed at addressing climate change and achieving greater energy independence by developing clean energy sources, C-SPAN broadcasts indicated.

But he also told lawmakers that he views nuclear power and coal as critical parts of the nation’s energy mix and said he was optimistic that ways can be found to make coal a cleaner energy source by capturing its carbon dioxide emissions – or carbon capture and storage (CCS) – a technology long advocated by the Bellona Foundation.

Chu told senators that climate change is “a growing and pressing problem” and the nation’s dependence on oil represents a threat to the US economy and security.

Of the risks from global warming, Chu said: “It is now clear that if we continue on our current path, we run the risk of dramatic disruptive changes to our climate system in the lifetimes of our children and grandchildren.”

Chu said nuclear energy produces a fifth of the nation’s electricity and 70 percent of the carbon-free electricity and “is going to be an important part of our energy mix.”

The nuclear industry has high hopes for Chu, noted one Nuclear Regulatory Commission source. The source, who spoke privately as he is not authorized to talk with the press, noted that Chu, along with other national energy lab heads, signed a paper last summer saying nuclear power "’must play a significant and growing role in our nation’s – and the world’s – energy portfolio."

EPA mandate to deal with global warming
In his approach to giving the EPA some of the teeth it lost during the Bush Administration, Obama has called for bold legislation to curb the greenhouse gas emissions responsible for global warming that would reduce US emissions by 80 percent by 2050.

But it is unclear whether he will pursue a new law first or use existing statutes to more quickly address the problem. He could immediately grant states like California the right to regulate emissions from automobile tailpipes, or trigger controls under the Clean Air Act, the Associated Press reported.

US Energy industry reaction
Despite praising it publicly, the energy industry is wary of Obama’s incoming energy team which will likely call for major changes in the country’s energy plan.

Even Big Oil put on smiles. The American Petroleum Institute issued a statement saying it "looks forward to working with President-elect Barack Obama’s appointees to develop a comprehensive, fact-based and realistic energy policy."

But unlike President Bush, Obama hasn’t put a single person from the fossil fuel industry on his energy team.

The Obama team is adamant about capping greenhouse gases – a costly proposition for a country that uses fossil fuel for 85 percent of its energy – and move to more renewable sources of fuel.

The US coal industry – which provides some 50 percent of the country’s energy – is therefore likely to be one of the biggest energy sector losers under the newly assembled energy chiefs.

Chu has called coal his "worst nightmare" because of its heavy carbon footprint, CNNMoney.com reported.

How fast will Obama move to stamp out coal?
"The target this time around is coal," said Christopher Ruppel, an energy analyst at Execution LLC, a brokerage and research firm for institutional investors in hedge and mutual funds.

"The consensus is (that) this administration does not want any new coal plants," Ruppel said.

Technologies to make coal cleaner – such as CCS – are expensive and untested on a large scale – thought the European Union has agreed to finance several pilot CCS plants in developing nations, and Norway has also moved to implement a pilot project for carbon capture at its Mongstad industrial complex, and hopes to do the same at Kårstø.

Ruppel said that Obama’s incoming team likely won’t take drastic steps, like passing carbon restrictions that are too tight or too fast, or directing the EPA to clamp down on coal plants.

"These are very pragmatic regulators," Ruppel said referring to Jackson and the colleagues she will bring with her. "They realize the country is in an economic crisis, and they don’t want to put these industries into a tailspin."

Others think the new administration will be even more relaxed than that. The nation needs to fill a growing need for electricity and, next to conservation, coal is the cheapest option.

"In the near term, there’s not going to much of a change in the energy policy of the US," said Lasan Johong, a utility analyst at RBC Capital Markets.

"The overwhelming concern is the economy. Everything (Obama) wants to do costs money, and that has to come out of the pocket of consumers."

With the economy weak, the coal industry remains upbeat that it will continue to play a big role in the nation’s power mix.

"The important thing is to look at their policy directions, including building and maintaining jobs," Carol Raulston, a spokeswoman for National Mining Association, told CNNMoney.com. "We think coal will play and important role in that."