EU Commission to contribute €1.25 billion to CO2 capture and storage

BRUSSELS – The European Commission came forth Wednesday afternoon with an extremely encouraging announcement that it is proposing to contribute some €1.25 billion to its crisis package for CO2 capture and storage. Also offshore wind power will receive a bit of the windfall of its own.

Published on January 27, 2009 by Eivind Hoff, translated by Charles Digges 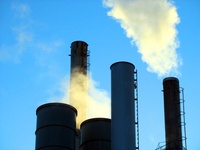 In the proposed EU economic recovery package, the Commission suggests that the EU put some €1.25 billion toward CO2 capture and storage (CCS) from fossil fuel powered plants.

“This is very gratifying. We can’t use new coal plants in Europe without their CO2 emissions being cleaned,” said Bellona Europa director Eivind Hoff. “It is therefore so important to situate funding for CCS as soon as it is altogether possible, and this crisis funding can contribute to that.”

A climate-friendly crisis package
The Commission proposes to use a total of €3.5 billion for climate and energy efforts like CCS, offshore wind energy and new and better infrastructure for electricity and gas.

Adoption can come quickly
In order for the proposals from the European Commission to become a reality, they must be supported by both the European Parliament and the Council, where all European Union Member States are represented. It will presumably take a few months before the proposal can be adopted.