The US must set itself tougher climate goals, Norway’s chief climate negotiator says

The United States should commit itself to a less distant climate reduction target than 2050, said Norway’s chief climate negotiator, Hanne Bjurstrøm, to her American counterpart, US Undersecretary of State Paula Doriansky, at Bellona’s climate meeting Tuesday. 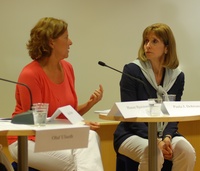 “Norway and the United States are in agreement about the need for a climate agreement in Copenhagen, and about a common but differentiated approach for commitment in different countries”, said Bjurstrøm after the meeting with Dobriansky.

“But in reality, there are big differences between the Norwegian and American positions. Norway has a Kyoto commitment, something the United States doesn’t have. And Norway is willing to further such commitments independent of whether there will be a new agreement or not,” she said.

There must be tougher cuts
Norway has set itself the goal of “over-fulfilling” its Kyoto commitments by 10 percentage points, and to be “climate neutral” by 2030 – with two thirds of the cuts happening nationally.

As a member of the Group of Eight industrialised nations (G-8), the United States has just announced it is willing to half its emissions by 2050.

“This would be a very positive signal for other nations if the United States took a responsibility like this on itself.”

Norway’s pronounced goal is to work to hinder a temperature rise of more than two degrees. According to the UN’s International Panel on Climate Change (IPCC), this entails that the industrialised countries must cut emissions by between 25 and 40 percent up until 2020.

An unwieldy system
The United States places much weight on the notion that developed – and competitive – economies, such as China and India, must take a significant portion of responsibility for climate gas emissions if the United States is to commit itself to an international climate agreement.

Svend Søyland of Bellona’s Washington office says, meanwhile, that there are grounds to be optimistic. He thinks the United States will take a bigger responsibility for cuts in its own climate gas emissions.

“Both presidential candidates, (Democratic hopeful Barack) Obama and (Republican candidate John) McCain, have on many occasions committed themselves to a better climate policy. It is relatively plausible that the next president will come to meet a demand for a climate goal by 2030 or 2030,” Søyland said.

“The problem is that the American system is unwieldy. During the climate meeting in Copenhagen next year, it is not certain that then new president will have a proper mandate. Irrespective of how willing he must be he must have a clear majority from both congress and the senate behind him,” he said.

Sector by sector approach
In international climate negotiations, both the United States and Norway support a sectoral approach to emissions reductions. This can mean the industrial sectors such as energy, cement and steel production, or sectors like transport and deforestation.

“Such a sectoral approach can be one way to give countries like India and Brazil an opportunity to take on commitments in a new climate agreement,” said Bjurstrøm.

She underscores that a sectoral approach cannot substitute for clear national emissions obligations for industrialised countries.

“We benefit well from Norway’s experience with CO2 capture and storage through, among others, The Carbon Sequestration Leadership Forum. We have on our side invested in FutureGen and other projects. Through sharing information and experience, we can find a method to work together,” Dobriansky said.

“We consider that CO2 capture and storage is one of the most important efforts for tackling the challenges of climate change,” she said.

August climate meeting
The next big meeting for climate negotiations in the framework of the UN Framework Convention on Climate Change is in Ghana’s capital city of Accra on August 21st to 27th.

This is the third significant meeting of the year. The conclusive, and most high-profile will be the UN Climate Conference in Poznan, Poland in December. The December 2009 meeting in Copenhagen will, according to plan, forward a new global climate agreement.