BRUSSELS – United Kingdom Member of European Parliament (MEP) Chris Davies wants to make CO2 capture and storage mandatory for all new fossil fueled power plants from 2020, a proposal that Bellona supports but would hope to see applied to all new plants built from today on.

At a press conference in Brussels today, MEP Davis proposed to introduce mandatory implementation of CO2 capture and storage (CCS).

Davies wants legislation to prohibit, from 2015, the authorisation of any new fossil fuel power plant not equipped to capture and store 90 percent of its CO2 emissions.

”By 2020 no new plant should go into operation without beeing CCS equipped,” said Davies.

Must accelerate the process
In addition to proposing that no power plant should be built after 2020 without CO2 capture and storage, Davies proposes that all plants already existing should be retrofitted with CCS technology by 2025.

”If we don’t set up these goals, we’ll send the wrong signals to the industry. The industry says the technology can be used within the targets I set up,” said Davies.

In January 2007 the European Commision launched plans to build 10-12 demonstration plants for CCS by 2015, and this was endorsed by the heads of state in their summit meeting in March the same year.

”Now, 14 months later, none of these have been established. So we must accelerate this process and make sure the state leaders keep their promise”, said Davies.

”This is the political signal we so desperately need. From an environmental point of view we don’t want any new fossil fueled power plants built without CCS”.

Frisvold says the proposal is a good one, but underlines that it could have been even better:

”If the EU was really serious about this, we could make CCS mandatory tomorrow,” says Frisvold.

Double credits
To help establish CCS, Davies suggests new funding measures that will support those who move to implement the technology first. He would like to make the first CCS developers able to claim tradable credits for every tonne of carbon they store, in addition to the credits they save by not emitting CO2.

”At present, the power companies are waiting to see if the costs of CCS will come down. By introducing a short term ’double credit’ incentive I want to create incentives to build CCS plants sooner rather than later.”

The environmental committee in the European Parliament will vote on Davies’ proposals for mandatory CCS and new funding measures in October. 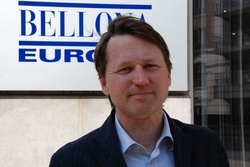 Remarkably safe
Davies, who has been the Parliament’s rapporteur on the draft legislation on geological storage of CO2, was asked about the risk of leakages when storing CO2. In line with leading geologists, he answered that there is no cause for concern.

”Storage deep underground is no hazard. It’s remarkably safe. And remember reality: We do move flammable gas in pipelines all over Europe, and we even bring the gas into our homes to put fire on it. In comparison, CO2 is natural, and we’ve got it in out Pepsi and beer, and it is not flammable,” he said.

Greenpeace dangerous
Davies was also commenting on the press statement from Greenpeace released yesterday, that was heavily criticising CO2 capture and storage.

”Greenpeace is regarded as appaling and ill informed. This statement is dangerous,” says Davies, pointing out all the potential problems and destructions climate change can cause in the near future.

Davies mentioned the Bellona Foundation’s advocacy for CCS in connection to the need to ”face up to the reality – the use of fossil fuels will only increase”.

”How ever much I must agree with Greenpeace on how nice it would be to organise things differently, we don’t have the time,” says Davies.

You can read Bellona’s reaction in yesterday’s posting on Bellona Web by clicking it’s link in the box to the right on this page.