President of the Bellona Foundation, Frederic Hauge, spoke this week at the European Energy Summit 2007, organised by the Brussels based think tank, Friends of Europe. 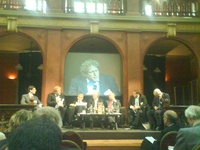 President of the Bellona Foundation, Frederic Hauge, spoke this week at the European Energy Summit 2007, organised by the Brussels based think tank, Friends of Europe. European leaders in the field of energy and climate change participated in the event, including the European Commissioner for Taxation and Customs union, Mr. Laszlo Kovacs, and the Executive Director of the International Energy Agency, Mr Claude Mandil, and several Members of the European Parliament as well as representatives from the European Commission. Executives from international power and petroleum companies also attended the event.

The summit agreed on the need for enhancing all green house mitigation options, with clear emphasis on energy efficiency, renewables and deployment of carbon capture and storage technology on fossil energy sources. Although the organiser attempted to put the thrust of the task to reduce CO2 emissions on the consumers, it became clear during the course of the seminar that energy companies and public authorities had a major role to play. In his intervention, Frederic Hauge underscored the need for using fossil fuels with carbon capture and storage if the world economy shall continue to perform and the remaining two thirds’ of the world population shall get access to adequate amount of energy. Hauge said the EU and the US had a unique opportunity to present the potential CO2 reductions from using CCS on fossil fuels in connection with the forthcoming post-Kyoto negotiations on Bali in November this year. CCS did not exist last time world leaders came together to discuss green house mitigation options in Kyoto. This time, new and efficient technologies must become part of a new and truly global agreement. The use of CCS technology can also give access to previously un-minable deep coal beds, thus changing dramatically the energy supply situation. Such an alteration of the energy supply situation of Europe and the US can have positive impacts on geopolitical strategies. Wide implementation of CCS can indeed make OECD countries less dependent on imports of oil and gas from the Middle East and Russia.

Hauge presented the ZEP vision and strategy to develop CCS on a commercial scale in Europe by 2020. He noted the important role of the European Commission to work in close cooperation the Member States and the European power and petroleum industry in order to establish a European Flagship programme on up to twelve full scale power plants with CCS technology by 2015 – as endorsed at the European Council meeting in March this year. Hauge also emphasised the Commission’s role in elaborating proper guidelines for state aid that will allow public investment in these demonstration projects – a comment later endorsed by his co-panellist, Philip Low, the Director General of the Commission’s competition authority.