An industrial consortium led by Bellona is asking the Norwegian Minister of Climate and Environment Espen Barth Eide for a policy framework to enable the removal of greenhouse gases from the atmosphere.

Published on November 30, 2021 by Bellona Europa 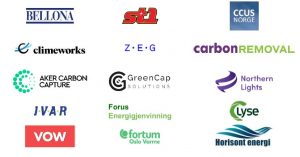 An industrial consortium led by Bellona is asking the Norwegian Minister of Climate and Environment Espen Barth Eide for a policy framework to enable the removal of greenhouse gases from the atmosphere.

– We need policies that make it possible to remove greenhouse gases from the air. Together with 14 industry players, we urge the government to facilitate this, says Eivind Berstad, Senior Adviser at Bellona​​.

To limit global warming, it is not enough to just reduce future greenhouse gas emissions. In addition, we must actively remove greenhouse gases that are already present in the atmosphere and stores the gases safely underground forever. This is called “negative emissions”.

Access to clean energy and good storage locations for carbon dioxide gives Norway natural advantages for removing greenhouse gases from the air. In addition, Norway has world-class expertise and mature technology for carbon capture and storage.
– The technology for negative emissions is already clear today, but political goals and frameworks must be in place before we can start removing carbon dioxide from the air, says CSO in Greencap Solutions, Jarle Skjæveland.

Plants and trees absorb carbon dioxide from the air through photosynthesis. When biological waste is incinerated in a waste incineration plant, a lot of carbon dioxide is formed, but it costs nothing to dump it in the atmosphere, and there is no incentive to capture and store it. The same can also be said of other facilities which emit biogenic carbon.

– An obvious weakness in today’s climate instruments is that they do not facilitate the capture and storage of carbon dioxide from the incineration of biological waste. The climate impact of preventing these emissions is as strong as capturing and storing fossil greenhouse gases. We believe that a framework must be created with instruments that together strengthen the possibilities for negative emissions to also trigger large-scale capture and storage of greenhouse gases of biological origin, says Audun Aspelund, chairman of the board and promoter of carbon capture and storage at Forus Energy Recovery.

– Norway should, in collaboration with Sweden and Finland, develop its policy instruments for negative emissions and influence the discussion at EU level. We should not wait until the EU has solved its regulatory technical challenges in the field, but rather build industry for negative emissions already now, says Eirik Borstad Lilledahl, chairman of the board of Carbon Removal.