A late night fire broke out aboard the Vaygach Russian nuclear powered icebreaker, killing two but leaving the vessel’s reactor untouched. No radiation leaks have been detected, according to Russia’s Emergency Services Ministry.

Published on December 16, 2011 by Charles Digges 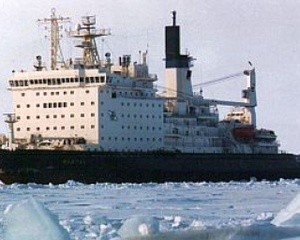 The vessel, which had departed from Dudinka 2,800 km northeast of Moscow and was breaking the way for the freight carrier Kapitan Danilkin along the Yenisei river that runs north through Siberia, continues to operate normally.

A third man was reported to have suffered from smoke inhalation in the predawn fire which broke out when the vessel was near the mouth of the Yenesei River close to Russia’s northern coast on the Kara Sea, Russia’s Emergency Services Ministry reported on its website in a brief Russian press release.

The blaze was extinguished at 3:58 am local time two and a half hours after it started in living quarters aboard the ship, and there was no threat of a radiation leak, said the Emergency Service Ministry’s website.

Technician Alexander Shevchenko sustained burns to his upper respiratory tract and had to be airlifted to a medical facility in the port of Dudinka 150 kilometres away. No reports are yet available on his condition.

“The fire did not affect operation of the reactors, and radiation levels are normal,” the Interfax news agency quoted an official with the state nuclear and industrial oversight body Rostekhnadzor as saying.

The cause of the blaze is currently unknown, but Rosatomflot, the owner of the Vaygach, has said it has started an investigation. Rosatomflot said it has not ruled out human error.

It has also said it will pay at least 1 million roubles ($31,000) in compensation to the families of those killed by the fire, WNN reported.

Andrei Zolotkov, Director of Bellona-Murmansk expressed his condolences to the families of those who were killed in the fire.

He also noted, though, that there are many safety barries preventing a fire from damaging reactor integrity.

“A fire has to penetrate many protective barriers before it can cause any damage to the reactor installation,” he said. “This gives the crew enough time to shut down the reactor in case of fire emergencies.”

But he pointed out one critical factor that cannot be controlled despite the safety measures in place:”People start panicking.”

Other operations this year for the Vaygach

The Vaygach was last February dispatched from its port in Murmansk to the Baltic Sea to help free some 58 vessels that were trapped in ice during an unseasonably cold winter.

The icebreakers 25,148 journey along the Norwegian coastline raised eyebrows in Oslo, as the passage of nuclear powered icebreakers along the country’s coast are exceedingly rare.

But systems for reporting such emergencies have been lacking, and Norway has grown more discontent with more frequent passages of nuclear cargos to Russia along its coast.

The Vaygach’s specific purpose is to accompany convoys of vessels to the mouths of Siberian rivers and it’s characterized by its reduced draught. The vessel was built in a Finnish shipyard by commission of the Soviet Union in 1989. It set to sea in 1990. Its reactor unit was built at the Baltic Shipyard in St. Petersburg.

The entire compartment containing the troubled reactors had to be cut out of the icebreaker, which were later sunk near the Arctic island of Novaya Zemlya.  The Lenin is no longer in service and is currently icebreaker museum in Murmansk.

Other problems that have recently plagued Russian icebreakers have been reactor coolant leaks – a term with especially dark connotations since the Fukushima Daiichi disaster in Japan where an earthquake and tsunami knocked out back up coolant systems, leading to a triple reactor meltdown.

In May, the Russian icebreaker Taymyr had to be escorted back to Murmansk by another icebreaker, the Rossiya, after it sprung a reactor coolant leak in its primary coolant circuit at sea. It was the third such incident occurring aboard a nuclear powered icebreaker – and the second aboard the Taymyr – in recent years.

Another such leak had been reported aboard the nuclear icebreak, the Arktika. The Arktika was decommissioned in 2008.

Russian authorities were slow to release information about the incident aboard the Taymyr, and only when a Rosatomflot source confirmed the leak to Bellona did Rosatomflot amend its own report to reflect the gravity of the danger.

The reactor coolant leak aboard the Taymyr was attributed to a poor weld in the coolant system.

“Leaks in the piping system of steam generators remain the most frequent operational incident during the deployment of nuclear vessels,” candidly wrote Rostekhnadzor in its last yearly report.

Rostekhnadzor registered 13 operational incidents (in 2008, there were 15) and seven of them were issues with the steam generators.

“The main reason that the steam generator units go out of order is still not fully understood,” reads the Rostekhnadzor report.

As a result of this discovered defect, the Vaygach itself underwent work on its steam generator No. 3 in February of 2003.