Rosatom to incorporate nuclear-powered icebreakers – how transparent is the move?

MURMANSK – Following a recent presidential decree that removed Russia’s Murmansk-based nuclear icebreaker fleet from the list of non-privatisable state-owned sites, the Russian Nuclear Corporation Rosatom is now planning to re-organise the operator company responsible for the icebreakers and their service infrastructure into a joint stock company – a move that, experts fear, bears certain ambiguities.

Published on October 11, 2011 by Anna Kireeva, translated by Maria Kaminskaya 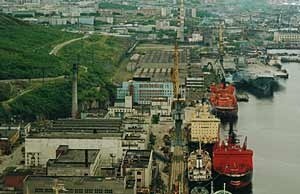 Rosatom head Sergei Kiriyenko was quick to clarify while in Murmansk last week, however, that Russia’s nuclear-powered icebreakers were under no circumstances going to be transferred into private hands. The icebreakers were taken off the list of sites exempt from privatisation in order for Rosatom to be able to incorporate Rosatomflot, the icebreaker operator company, as a joint stock company.

“I ask you not to confuse privatisation with incorporation,” Kiriyenko said. “And what is being planned now is exactly incorporation of Rosatomflot.”

But some experts suspect the change could introduce additional corruption risks into a domain that has lately been plagued by corruption scandals – or, at least, has revealed vulnerabilities warranting special scrutiny (here and here).

Still others believe corruption risk is not the issue, but incorporation necessarily leads to privatisation, with further possibilities that remain unclear.

Since the inception of Soviet nuclear fleet – the day when the state flag was hoisted on the USSR’s first nuclear icebreaker, the Lenin, on December 3, 1959 – this fleet has been in the ownership of the state.

During the Soviet period, all nuclear icebreakers were on the books of the Murmansk Shipping Company – which, like all other shipping companies in the former Soviet Union, was state-owned as well.

A specialised base was also created in Murmansk to handle vessel repairs and refuel the icebreakers’ onboard reactors.

The peculiarities of Rosatomflot’s anticipated change from current to incorporated business form have to do with the principal difference between what is called in Russia a FGUP – for federal state unitary enterprise – and an OAO, or joint stock company. Common in both Russia and other post-Soviet states, FGUPs are state-owned companies that have no right of ownership to the assets they operate or employ as part of their operation. This is in contrast to joint stock companies, where participating partners in the business own shares as certificates of ownership.

Bellona’s expert, Doctor of Economics Leonid Andreev, explains that so far, the icebreaker operator company Rosatomflot has operated as a FGUP.

“This means that it does not own the property that has been assigned to it (because the state is the direct owner), but, rather, disposes of it by right of economic management,” Andreev told Bellona in his comment. “It follows, then, that this property is indivisible (cannot be divided into stock or shares) and cannot be transferred into the registered capital of other legal entities, though it does serve to ensure the FGUP’s fulfilment of its obligations.”

FGUPs, Andreev said, are commercial organisations that work to derive profit for the owner. In other words, what profit is effected is turned over directly to the state – but the state, as the owner of the assets, can require a FGUP to pursue different objectives that are not necessarily associated with deriving profit. The losses resulting from the operation of a FGUP are also borne by the state.

By contrast, joint stock companies have much more control over the property they dispose of by right of ownership, and they are at much greater liberty to manage it as they will. The same can be said about profit – the state, as a shareholder, only has a claim on dividends, Andreev explained.

In 1993, after the break-up of the Soviet Union, the Murmansk Shipping Company, which was responsible for the operation of nuclear icebreakers, was among many to be reorganised as a joint stock company. But even though the nuclear icebreaker fleet remained in state ownership and were not subject to privatisation, the Murmansk Shipping Company continued to operate the fleet.

Since August 27, 1998, the company continued to operate the icebreakers as per a trust management agreement it signed with the government once every five years.

But in 2008, the government decided not to extend the trust management license and transfer both the fleet and its auxiliary services into Rosatom’s ownership as a state asset to be a part of Rosatom. This was done in August 2008. FGUP Rosatomflot now operates the icebreaker fleet for Rosatom.

In late 2007, Rosatom itself had been reorganised from the Federal Agency of Atomic Energy that it was until 2008 and all of the enterprises in its purview were incorporated as entities of a government-owned stock company, with Rosatom acquiring the legal status of a state corporation.

According to Rosatomflot’s general director Mikhail Belkin, the plan is to transfer all 100 percent of the company’s shares to Rosatom.

“From the point of view of the law, it’s easier to manage such a business form as a [joint stock company] than a FGUP,” Belkin told Bellona in an interview. “What we’re talking about here is state purchases, efficient decision-making and efficient management.”

Belkin also said that Rosatomflot was a commercial enterprise whose operations were aimed at effecting profit. That is easier to do when the entity in question is a joint stock company rather than a state-owned unitary enterprise, he said.

“There will be no change in how control over the enterprise will be exercised, other than, maybe, it will become stricter since OAOs are looked at with greater scrutiny,” Belkin told Bellona.

According to Andreev, however, OAOs, as opposed to FGUPs, are not required to disclose information regarding what is known in Russia as “state purchases” – tenders, orders, and contracts initiated by the state, where government ministries and agencies buy services, goods, and works from private sector companies to provide for the state’s needs – on the official site where terms, conditions, and results of the Russian Federation’s purchases are posted.

Rosatomflot, being for now a state-owned unitary enterprise managing state-owned assets, is required to publish such information for open access. It is via changing this status for one of a joint stock company, Andreev said, that a corruption component could come into the picture – as the reorganisation may result in less transparency in the enterprise’s operations.

However, Vladimir Slivyak, co-chair of the Moscow-based ecological group Ecodefense!, argues that may not be the real point of concern.

“This is a questionable point, because Rosatom’s practice is to officially publish information about its purchases anyway – though it does not have to,” Slivyak told Bellona. “Besides, incorporation is something that is done in order to be able to privatise a company’s assets thereafter. That is the only conceivable goal for which incorporation may be attempted.”

With that, the specific objectives for which Rosatomflot’s incorporation and privatisation are being done remain for now open for speculation, he said.

Nuclear icebreaker fleet to remain state-owned for some time yet

According to Rosatomflot’s deputy general director for fleet maintenance Andrei Smirnov, incorporation of Russia’s nuclear icebreakers will unlikely start before 2017.

This is when cargo traffic along the Northern Sea Route is hoped to increase dramatically, Smirnov said, warranting matching icebreaker resources to convoy cargoships in their voyages.

According to Smirnov, traffic along the Northern Sea Route now totals over two million tonnes. That is over three times as little as the figures of 1987, when Soviet cargoships would carry up to seven million tonnes of goods a year. During the 1990s, when the country was undergoing a difficult transition from the USSR’s planned to the new Russia’s market economy, overall shipping figures were down to between 1.3 million and 1.4 million tonnes, and only grew to 2.4 million tonnes in 2010 thanks to transit traffic.

“Until 2017, or before [sufficient] cargo traffic appears, there will hardly be any privatisation,” Smirnov said, referring to the planned Rosatomflot reorganisation in exactly the way Kiriyenko discouraged when commenting on the move.

Smirnov said 2017 is when a new natural gas liquefaction plant is to be taken online in the Gulf of Ob, in the Kara Sea in Russia’s north, and cargo traffic in the northern seas can be expected to jump to between 15 million and 20 million tonnes that will now include gas condensate shipped out of the bay.

In this case, the icebreakers may be privatised, Smirnov said.

He also said that in the meantime, the hope was to increase cargo traffic along the far northern routes up to three million tonnes by 2011.

As for the incorporation, Smirnov said, that will likely concern icebreakers of the new type – those that Russia expects to build by 2017. By then, most of the vessels in operation today will have been decommissioned.

Besides these, there are two nuclear service vessels – Imandra and Lotta, a special-purpose tanker for liquid radioactive waste Serebryanka, and a maintenance vessel providing sanitary, decontamination, and dosimetric control services.

Several vessels have by now been decommissioned: the first Soviet nuclear icebreaker Lenin, the icebreakers Sibir and Arktika, and the nuclear maintenance vessels Lepse and Volodarsky.

And in March 2011, Murmansk took delivery of a  €70 million ship designed to transport all manner of containers with spent nuclear fuel and radioactive waste, a vessel with a displacement of 4,000 tonnes built by Italy’s Fincantieri. The vessel was built under the framework of a 2003 Russian-Italian agreement on bilateral cooperation on dismantling Russia’s decommissioned submarine fleet.

While on his visit to Murmansk last week, Kiriyenko in fact shed light on the future upgrades anticipated for the Russian nuclear icebreaker fleet.

Kiriyenko said funds will start trickling in beginning next year to finance construction of the first of the three powerful new-generation icebreakers Rosatom plans to have completed by 2020.

He also said the newbuildings will be able to cut through ice as deep as three metres as they convoy vessels in the Russian Arctic, thus helping maintain year-round navigation along the Northern Sea Route.

According to Kiriyenko, “nuclear power plants for these icebreakers will be built using [Rosatom’s] own resources, and the work is already under way.

Kiriyenko pointed out these will be principally new, more powerful reactors – a model dubbed Ritm-200.

“This is a modern reactor for which no analogues yet exist,” Kiriyenko said. “By creating this reactor for the new type of icebreakers, we are also elaborating our technology for the new generation of floating nuclear power plants.”

Rosatom head was referring to his corporation’s idea of using nuclear power plants on board of transportable sea-going barges that could be towed to remote, energy-starved areas to cover local demand in electricity – a project vastly challenged by both environmentalists and experts in the field for immense ecological risks and lack of economic substantiation. However, with the very first in a projected series of seven such vessels caught up in a bankruptcy scandal, the fate of the long-foundering project may now be under question.