Nuclear icebreaker ‘Lenin’ says all board, but keeps the overly curious at bay

MURMANSK – Since its recent arrival to the future place of permanent mooring in Murmansk, the nuclear icebreaker “Lenin” has been visited by nearly 5,000 museum-goers. Yet the question persists if the more decorous version of the ship’s history presented on board does not do ill justice to the vessel and the people who served on it.

Published on August 2, 2009 by Alexey Pavlov, translated by Maria Kaminskaya 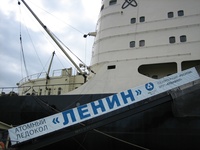 The Lenin was moored at the passenger terminal of the Port of Murmansk, in Northern Russia, on May 8th. In the wee hours of the previous night, newly renovated, it had left the docks of the nuclear icebreaker operator company Atomflot, also in Murmansk, and by 5 a.m., arrived at its specially constructed berth at the port.

The idea to give the Lenin – Russia’s firstborn in a fleet of nine nuclear icebreakers built since 1959 – its final resting place at a port and turn it into a floating museum first surfaced when the ship was decommissioned in 1989. The aged vessel had by then, essentially, morphed into a museum anyway – everything on board remained exactly as it was in the 1950s.

After being taken out of operation, the *Lenin almost followed the sorrowful fate of the first Russian icebreaker, the Yermak, named so after the famous Russian explorer of Siberia, the Cossack ataman Yermak Timofeyevich. Often referred to as the world’s first true icebreaker, it was built for the Imperial Russian Navy in England in 1898 and served for almost 70 years until, in 1964, the legendary vessel ended up in a scrapyard. The Lenin, however, was rescued by a group of enthusiasts led by the vessel’s captain Boris Sokolov.

What followed was almost a decade of extensive work as the Lenin was being prepared for a permanent mooring in Murmansk. The icebreaker was taken to the docks for full restoration, while dredging works were undertaken at the passenger terminal of the port and a wharf was built to accommodate the museum. The section of the shoreline where the vessel was to be standing was redeveloped to welcome the Lenin visitors. The efforts took nine years and RUR 140 million in sponsorship funding.

Still, one final push is needed before the Lenin becomes a fully permanent feature of the port: In the fall, the vessel is expected to return to Atomflot docks for additional repairs. It will likely only be closer to the Lenin’s 50th anniversary, in December this year, that the icebreaker finally settles at the port.

By then, it will fully turn into a museum, with exhibits tracing the history of its construction and voyages, and there are also plans to expand the site with a conference hall and an educational centre focussed on the history of polar exploration and the development of atomic technologies in sea trade and the Navy. It may also become the headquarters of Murmansk’s local sea captain organisation.

Just how exactly these plans can be fulfilled – along with other specifications of the Lenin’s new line of service as a museum, such as how many visitors the icebreaker can take on board at a time – will become clear during the summer layover at the port. The project of the museum is thus still under development, but test tours and a range of public events are being offered meanwhile to finalise all details.

The tour starts in the saloon, the officers’ dining and social room and the finest place on board. Here, the guide narrates the history of the ship and the people who captained it in the Arctic seas. The visitors then follow the guide along the winding corridors and steep stairs deep into the vessel’s bowels, stopping on their way to see the seamen’s messroom and their cabins or take pictures of one another at the control room of the nuclear propulsion system or behind the steering wheel at the bridge. A display room with a collection of museum exhibits and the engine room are also part of the itinerary. The entire tour takes one hour.

The reactor compartment, naturally, remains the chief attraction on the Lenin. It can be viewed through thick window panes and, as the guide will tell you, it is safe for visitors to be around since all hazardous materials are long gone from the site.

Yet, disappointment awaits those who hope to learn of those serious accidents that took place on the Lenin during its long years in service: The tour guides are not especially talkative when it comes to these less glorious pages of the icebreaker’s history. The local media, too, keep a demure silence. One wonders if the public should really be shielded from the knowledge that what has now become a venerable museum space used to be where dozens of sailors were exposed to severe doses of radiation in the course of two major incidents that compromised the vessel’s radiation and nuclear safety.

“While unloading spent nuclear fuel from the reactor, it was discovered that the fuel assemblies had sustained major mechanical damage. During the investigation of the accident it turned out that the reactor core had been left without water due to an error made by the personnel. Because of this, the assemblies became deformed and damaged.”

The second accident on the Lenin happened in 1967, said Ponomarenko. A leak occurred in the pipeline system of the third circuit, which cools the reactor’s equipment, he elaborated. It turned out then that such defects were impossible to repair and the decision was made to replace the vessel’s propulsion system, type OK-150 – a Soviet design of a pressurised water reactor used on board of marine vessels – with a successor reactor of type OK-900. These works involved the participation of the icebreaker’s personnel, who were exposed to high radiation doses and then had to sign non-disclosure agreements.

History demonstrates that both design defects and the so-called human factor play a major role in the many severe accidents that take place at nuclear energy sites. As experience accumulated through several disastrous accidents shows – most notably, the Chernobyl catastrophe – neither the more advanced technologies nor the intricate fail-safe systems can save the day in such cases as necessary precautions may simply remain unengaged purely for the sake of the “integrity of the test.”

As the Lenin prepares to reveal its history to the curious public, both Murmansk tourists and the general audiences are thus far left questioning if they really should be spared the more controversial details of the vessel’s past record – tragedies that still remain unsaid.