MURMANSK – The Russian nuclear icebreaker fleet is old, unprofitable and unneeded, and Rosatom has the task of making the icebreakers profitable, while dealing with its radioactive waste and decommissioning old ships on the state budget’s nickel, Atomflot’s new management summarized in a press conference Wednesday.

Published on September 4, 2008 by Anna Kireeva, translated by Charles Digges 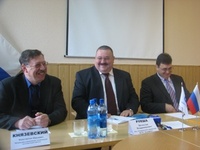 The purpose of the Rosatom takeover of the icebreaker fleet, suggested Atomflot Acting Director Vyacheslav Ruksha Wednesday, was to use it in the development of the Arctic aiding oil convey – but this is a question for the future.

Ruksha has been acting director of Atomflot, the company that services Russia’s nuclear icebreakers, which was absorbed to Rosatom last week. The owner of the vessels, the Murmansk Shipping Company was also taken over by Rosatom and made part of Atomflot.

Despite the optimistic tone struck by Atomflot management at Wednesday’s press conference, the reality of its situation is no rose garden.

The Atomflot technical base possesses aging nuclear service vessels, and outmoded infrastructure, icebreakers operating under extended life spans, old technology and an ageing workforce whose experience will not be easy to replace.

And while Russia is earmarking finances to help solve its own nuclear and radiation problems, it still can’t foot the bill.

What Rosatom needs icebreakers for?
Ruksha told reporters that the hand off of the icebreakers has been completed. Atomflot, in its new guise as a Rosatom affiliated enterprise, must now re-license all of its facilities, he said.

“Over the news six months, we will get license for concrete facilities – at present we have a general license for all types of activity,” Ruksha said.

Ruksha said that the hand off of the nuclear technical service vessels and icebreakers to Atomflot from the Murmansk Shipping Company, is an attempt at a “different approach” to managing the most serious industry sectors. “With tardiness, but Rosatom is preparing” a document in which “an analysis will be conducted of the entire infrastructure of nuclear enterprises on the Kola Peninsula – its deficiencies and redundancies.”

Atomflot’s first deputy director, Mustaf Kashka, said that in Soviet times cooperation between governmental departments was solid, but over the past 10 years, the shipping company managing the nuclear icebreakers has been on the sidelines.

“It must be understood that in Northwest Russia there are many nuclear enterprises and they all are trying to attract funding,” said Kashka. “All of these enterprises are very valuable.”

Kashka said that that these expensive facilities are built, and then need to be decommissioned.

The profitability of icebreakers
Atomflot representatives said that currently the icebreaker fleet is not profitable. It has many icebreakers, but their services at full capacity are not in demand.

For example, Norilsk Nickel – on of the chief partners today, which has always used nuclear icebreakers to accompany its loads through the Northern shipping route – is now building its own ice class boats. It is unknown whether the company will have any further use for nuclear icebreakers.

Icebreakers were also seen as critical to accompanying tankers from the Varandeisky Oil Terminal, but both Lukoil and ConocoPhillips are building their own icebreaker fleets. The nuclear icebreakers have no other serious clients.

It is therefore coming to pass the icebreakers that have been ready to take to sea at a moments notice are sitting idle without work.

“We would be a flowering company if we had about three or four icebreakers – we don’t need any more,” Ruksha told reporters.

Ruksha also said there was demand for shallow-draught icebreakers like the Taimyr and the Vaigach, which can work  in the estuaries of Siberian rivers. Atomflot’s mandate, said Ruksha, is to build a new generation icebreaker, and to maintain is technology and staff.

Currently, engineering plans are being drafted for a new kind of dual-purpose icebreaker, and next year a working plan for it will be developed. The icebreaker under consideration would be able to work both rivers, like the Ob and the Yenisei, as well as the northern shipping route.

All hopes lie in the Arctic
“Next year, we will participate in defining the borders of the Russian continental shelf, and will also continue tourist cruises in the Arctic as long as it remains profitable,” said Ruksha. The company is also counting on hauling loads from the Yamal Peninsula in Northwestern Siberia.

Much will depend on the company’s tariff policies. An incomplete normative base for traffic along the Northern Sea Route, and for the use of nuclear icebreakers in the Arctic hinder developing a balanced tariff system.

“Icebreakers need large volume. In the Arctic there aren’t many loads that are more than a ton and a half, and it we’d like that to be about 10 million tons,” said Ruksha.

“It’s not how dependent Russia is on finances from abroad. International cooperation helps find consolidated solutions to many problems,” he said.

He also promised to maintain total openness before the public and NGOs of the region about Atomflot’s work in the framework of international agreements.

Decommissioning nuclear vessels
Kashka said that currently there are five active icebreakers in Atomflot that are entirely seaworthy – the Rossiya, the Yamal ,the 50 Years Victory, the Taimyr and the Viagach. If the company is so tasked, the Sovietsky Soyuz will take to the seas in eight to nine months.

The situation is more serious with icebreakers that have been taken out service, such as the Arktika, which is currently working to capacity, but only as a floating energy block.

The floating technical bases, the Lepse, and the Volodarsky need to be decommissioned. Solutions must also be found for dealing with radioactive waste that had piled up over years.

Federal Target Programmes
Kashka noted, however, that positive solutions for dealing with nuclear waste were emerging – chief among them the federal target programme “On radioactive safety in Russia for the years 2008-2012.”

“In the framework of the programme financing only in our direction will consist of something on the order of about 1.2 billion roubles ($47 million),” said Kashka in an interview with Bellona Web following the briefing. “This will allow us to bring our radioactive waste storage facility up to standard within four to five years. We’d like to do it faster, but unfortunately, it’s not technically possible.”

The federal target programme has earmarked 320 million roubles ($12.6 million) for the decommissioning of the Lepse, which means the spent nuclear fuel elements stored aboard the vessel should be removed within two to three years.

Spent nuclear fuel will also be removed from the Lotta nuclear service vessel within two to three years, after which the ship will be dismantled. During the first stage, the Lotta will be substituted by the special tanker Serebryanka, which is being retrofitted for this purpose.

Atomflot management is positive that within current requirement it will also deal with the floating technical base, the Imandra, but the construction of another technical bases is required.

“This could be a joint project with the military,” said Kashka.

He said that by 2010 Atomflot expects a new vessel for the transportation of spent nuclear fuel and radioactive waste containers from Andreyeva Bay. An agreement has already been signed with Italy for the construction of the vessel, and Atomflot is specified as the end used of the vessel in the contract.

In speaking of decommissioning nuclear icebreakers, Kashka said that not on single comment enterprise could deal with the financing of such work,

This is because, despite the demands of the law “On the use of nuclear energy,” article 34, decommissioning funds for nuclear powered vessels and nuclear service ships do not exist. They will be envisaged via a separate line in the federal target programme.