MURMANSK – The icebreaker and nuclear service ship fleet of the Murmansk Shipping Company and its service base Atomflot have officially been absorbed by the Russian state nuclear corporation Rosatom with the signing Wednesday of a government act confirming the transfer.

Published on August 28, 2008 by Anna Kireeva, translated by Charles Digges

Rosatom will not only be inheriting the fleet as a result of the change in ownership, but also its problems – among them the ageing vessels, storage of radioactive waste, and the necessity of decommissioning highly radioactive nuclear service ships.

The Murmansk Shipping Company is one of Russia’s largest shipping firms, which has managed nuclear icebreakers since 1959, when the first nuclear icebreaker, the Lenin, went in to service. The ships have been serviced at the Atomflot base just north of Murmansk

With the new shift, Atomflot will be the company that manages the icebreakers, and it is now a part of Rosatom.

According to Alexander Nikitin, director of Bellona’s St. Petersburg office, the Environmental Rights Centre Bellona, Rosatom is counting on a solid boost from the state budget for Atomflot’s renovation, vessel exploitation, and perhaps even development, to accompany its takeover of the icebreakers.

“(Russia’s) nuclear industry bureaucrats are looking everywhere for money for the realization of their mega-plans to build nuclear power stations, including floating ones,” said Nikitin.

“Rosatom is looking for buyers for its industries, which is not going very well. It is relying on the notion that the main buyer will be the government itself, which will use taxpayers’ money out of the budget.”

With the acquisition of Atomflot, Nikitin says Rosatom has discovered another means of getting budget money for its plans.

“It follows that we will see active construction by Rosatom of new nuclear icebreakers and other vessels and other suggestions from Rosatom in developing the Arctic continental shelf, and this is a new nuclear threat to the Arctic seas,” Nikitin said.

“No one in the world is building civilian nuclear ships – not because they can’t, but because it is unreasonable. Both world and Soviet experience shows this to be the case.” 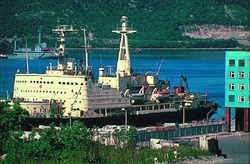 New owner, old problems
“One of the key problems that we are now trying to solve with the unification of the icebreaker fleet is the problem of postponed solutions – meaning situations arising in connection with the pile up of large volumes of radioactive waste, and the aging holdings of our enterprise and of the icebreaker fleet,” Andrei Abramov, Atomflot’s deputy director of special production and development, told Russia media.

Since 1997, long-term storage of radioactive waste at the Atomflot base has not been subsidised by the government. As a result, the storage facility for solid radioactive waste that was built in 1986 is now filled to capacity.

The ageing nuclear icebreaker fleet
By passing off of the icebreakers, Abramov sees a way to solve a number of problems: the enterprise will have to work to take irradiated service vessels out of commission. In the near future, this will include the Lepse floating technical base – a floating dump for spent nuclear icebreaker fuel, which will be extracted with international financial assistance. The floating technical base Volodarsky, which also contains large quantities of radioactive waste, will also be decommissioned.

Decommissioning icebreakers is also a future task that needs to be prepared for.

“Our enterprise was created precisely for serving the nuclear icebreaker fleet, including participating in the process of taking them out of service,” said Abramov.

“We have the experience and the specialists of the corresponding qualifications. Therefore, in uniting our strength, we see more effective solutions to the given issue.”

“Russia is placing its hopes on tapping Arctic oil supplies, for which it will actively use nuclear icebreakers,” he said. However, he underscored that the icebreaker fleet is old and will soon require decommissioning.

According to Ponomarenko, the majority of working icebreakers have already had their nuclear steam generating installations overhauled to extend their service lives, but that cannot be extended forever.

Only two of the 10 ships with nuclear energy installations – the 50 Year Victory and the Yamal, built in 2007 and 1993 respectively – have not needed overhauls.

The icebreaker Arktika, built in 1975, had its resources extended by 175,000 hours in an overhaul, and can supposedly remain in service until 2008.
Resource extension overhauls have also happened aboard the Rossiya, built in1985 and the Taimyr,  built in 1985, allowing them to continue at sea until 2018. An overhaul on the Vaigach will keep it operational until 2020. An overhaul extension until 2020 is also expected for the Sovietysky Soyuz as well.

The nuclear light carrier Sevmorput – an ice class transport ship – was taken put into service in 1988. In 2007, it was temporarily taken out of service. It is expected that it received a resource extension overhaul and will reappear as an oil-boring vessel.

It is as yet unknown where the funding will come from to decommission these nuclear vessels as no special fund was established for this purpose – although the Russian law “On the use of atomic energy” states that entities employing nuclear energy are responsible for building up these funds.

What does Rosatom need icebreakers for?
Apparently, with Rosatom’s acquisition of the icebreakers, the state is hoping to come out on top because all installations using nuclear energy will be concentrated in one set of hands.

It is assumed that in this way the administration of the icebreaker enterprise will have close ties with other structures within Rosatom, and will become familiar with its technologies for dealing with nuclear fuel and radioactive waste.

“I am sure that during any possible confusion, which usually takes place during reorganization of an enterprise, not one step will be taken toward a reduction of the achieved level of nuclear and radiation safety of the vessels or the physical safety of nuclear materials and radioactive waste,” said Bellona Murmansk Chairman Andrei Zolotkov.

Vladimir Slivyak, co-chair of  the environmental group Ecodefence, said that, “my opinion is that in any case, this is an integration that will not come to any use. Rosatom keeps growing, it’s budget still expands, and along with this, muddle emerges in the state corporation.”

“Rosatom has a practically impossible task in front of it: to find the means to isolate radioactive waste for the entire time it is dangerous, decommission nuclear power stations and other installations whose engineered life spans have expired,” said Slivyak. “Let them do this, and soon they will forward initiatives for new projects.”

Slivyak added that the icebreaker fleet would lose its significance as global warming is already melting swathes of the Northern shipping route that were earlier closed by ice.

Vitaly Servetnik of the Nature and Youth environment group said that Rosatom’s propaganda machine would crank up and give the whole transfer of the vessels a veneer of public participation. He said, though, that real opponents would be ignored, and that any visible dialog would be conducted by groups loyal to the nuclear industry.

The social aspect
In June 2008, while Rosatom chief Sergei Kiriyenko was in Murmansk, the fundamental question surrounding the passing off of the icebreaker fleet to Rosatom concerned lifestyle issues for Atomflot’s workforce.

So far, workers’ salaries have doubles and more raises are expected in autumn.