Russia’s new state nuclear corporation Rosatom will be taking over management of Russia’s nuclear icebreaker fleet in August in a move that local authorities say is being made too quickly and has not been thoroughly thought through, Russian media reports say. 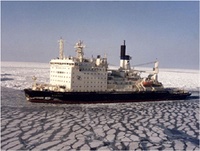 The state owned fleet of eight icebreakers has been managed since 1994 by the Murmansk Shipping Company, which also has under its purview several other nuclear powered vessels including the Sevmorput container ship.

But Moscow has decided the fleet will be moved into the hands of Rosatom, the mandate of which includes eventually taking control of all things nuclear in Russia – including nuclear regulatory oversight, which has raised the ire of Bellona and other environmental groups.

Murmansk Regional Governor Yury Yevdokimov spoke out against the transfer of the icebreaker fleet to Rosatom – an entirely new operator – saying the move “has not been prepared for in the proper way,” and is progressing with “unnecessary speed,” the Expert.ru new website reported.

Federal authorities in Moscow say the official reason for the transfer of management of the icebreakers to Rosatom’s power is a result of economic mismangement of the fleet by the Murmansk Shipping Company. A number of inspections, say Moscow authorities, reveal that the company has run the “strategically important fleet inefficiently and to the disadvantage of Russian state interests,”

Though officials reached by Bellona Web would not speak publicly, as they are not authorised to speak on the situation, they said privately that the strategic importance of the fleet lies in the development of the Shtokman oil field on Russia’s Arctic shelf.

Federal officials further argue that the Murmansk Shipping Company has economic interests which that may conflict with interests of other Russian companies – namely those that are participating in the development of the Shtokman field, one official said.

Late last year, an icebreaker from the fleet let an expedition of Duma deputies to the North Pole where they places a Russia flag on the ocean floor beneath the pole, sparking an international debate about who has territorial rights to the sea bed beneath the Arctic icecap.

Other federal interests at stake, said Rosatom representatives, are the development of a Northern shipping route. With the realities of climate change making themselves known in an ever shrinking polar icecap, state and corporate interested in dominating the Arctic’s northern waters and controlling the state shipping monopoly along Russian13,000 kilometer coast are high on the Kremlin’s agenda.

The state owns 25.5 percent of the Murmansk Shipping Company already, but Rosatom asserts that that the takeover is meant to strengthen state interests in the artic.

Representatives of the Murmansk Shipping Company, however, call into question Rosatom’s ability to run the fleet, saying the company has 40 years experience running the nuclear power vessels.

The company also complained that the federal government has failed to invest in the fleet for a number of years and that has put the burden of maintenance of the vessels squarely on the company’s shoulders, the Barents Observer reported. Much of the company’s income in recent years, say its managers, has come from running tourist trips to the North Pole.