The world’s first nuclear icebreaker Lenin was in operation from 1959 until 1989. During that time, there have been two seriuos accidents onboard. 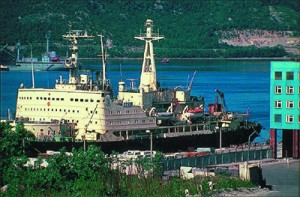 The first nuclear propulsion unit (OK-150) on Lenin had three identical pressurised water reactors (PWR) with a maximum heat output of 90 MWt. The shaft power was 44 ,000 horsepower. Enriched uranium was used as fuel (the content of U-235 was equivalent 85 kg), and distillate water was used as a moderator and for heat transfer.The reactor core was 1.6 meters high and measured one meter in diameter.The core consisted of 7,704 fuel pins in 219 fuel assemblies.


There have been two accidents onboard the nuclear powered icebreaker Lenin. The first took place in February 1965, when Lenin was undergoing repairs and refuelling. The vessel sustained severe mechanical damages to the fuel assemblies, some of which were broken in two pieces, and were detected during the unloading of fuel from reactor number two. About 95 spent nuclear fuel assemblies were transferred to the nuclear service ship Lepse and unloading was halted after that.


The decision was made to unload the remaining 124 spent nuclear fuel assemblies together with the neutron absorbing rods and control grid.


A special cask was built onshore to implement this operation. A part of the reactor containing spent nuclear fuel (SNF) was placed into the cask and filled with furfurolbased solidifying matter. This cask was then stored for two years. In 1967, it was reloaded onto a pontoon, towed by a tug to the eastern coast of the Novaya Zemlya Archipelago and dumped in Tsivolki Bay.


The second accident aboard the Lenin took place in 1967, when the pipe system of the third circuit sprung a leak following the loading of fresh nuclear fuel. In this instance it was necessary to open the biological shield of the reactor compartment in order to locate the leakage. This protection was made of concrete mixed with metal shavings and it required the use of sledgehammers to break through the shield.This led to further damage of the reactor installation. Upon later examination, it became clear that it would be impossible to repair the damage incurred to the reactor installation by the sledghammers.


By that time an upgraded model of the reactor installation, OK-900, was almost completed. The failure to repair the cooling system prompted the replacement of the whole reactor installation on the Lenin, and consequently, the whole 3,500-ton reactor compartment including steam generators and pumps was to be cut out. Since one of the reactors of the damaged OK-150 installation had been recently loaded with fresh fuel, it was decided to remove all of the assemblies and to send the nuclear fuel to the manufacturer. However, both the internal and external surfaces of the assemblies showed significant levels of radioactive contamination; therefore all assemblies were dismantled and the fuel elements were removed (36 fuel elements in one assembly). After that the elements containing fresh nuclear fuel were decontaminated using chemical solutions and carefully wiped clean. Only then they were sent to the manufacturing plant.


The icebreaker was then towed to the Zvezdochka shipyard in Severodvinsk, Archangelsk county, where the vessel remained from December 12, 1967 until May, 1970, while a new OK-900 reactor installation was being installed. Removal operations of the OK-150 reactor plant were carried out at the Zvezdochka yard in Severodvinsk and took 38 months. The operation included the following two stages:


-dismantling of the generator from April 19 until December 12, 1967. This operation was carried out according to guidelines developed by the central design office Aisberg. The generator with biological shielding was removed through the vessels bilge directly in a dumping area, (Zivolki Bay, Novaya Zemlya). The total weight of the dumped equipment was 3,500 tons. 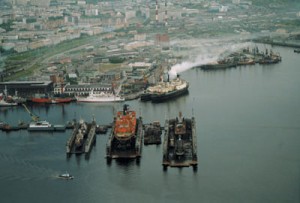 
During the second half of the 1990s, check-up operations were carried out and steam generator piping in the form of cutting metal samples for testing. The results of these tests will be applied towards developing solutions aimed at prolonging the active use of power plants in nuclear ships.


The nuclear icebreaker Lenin is currently moored in the harbor in Murmansk, which is located 1 km from the centre of the city. In the early months of 2000, a decision was made to create a museum onboard the icebreaker which would be moored in Murmansk Harbour. This project will cost more than 1 million USD; the federal budget for the year 2000 allocated 500 000 roubles for this purpose (equivalent to about 18 000 USD).