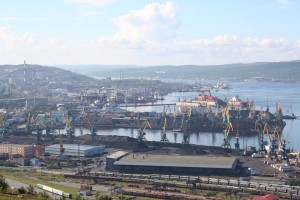 MURMANSK – The prime fishing waters of the Barents Sea and Kola Bay are being negatively impacted by industry, shipping traffic and other man-made influence and the Bay has been declared “dirty” by Russian scientific authorities.

The murky waters are also threatening the health of the population of Murmansk, which is the largest city in the world above the Arctic Circle.

A new report by the Murmansk Regional Ministry of the Environment has found in it’s recently released 2014 environmental report that the Arctic waters contain higher than permitted quantities of metal compounds and oil products.

The report said the Barents Sea – which Russia shared with Norway – continues to be polluted by rivers and other water bodies that bring pollution from inland out into the open Northern fishing areas. Discharges from large industrial complexes that have sprung up along the shores of the Barents Sea and Kola Bay are also heavy pollution contributors.

The Ministry’s report also said high and concentrations of hydrocarbons and other petroleum pollution are present in the waters of Murmansk’s Commercial Port. The port has historically shipped high volumes of coal, ores, and other potentially contaminating cargoes, and thus contains higher than permissible concentrations of a number of metal compounds.

Annual average values of oil hydrocarbons in  Commercial Port exceed the allowable pollution level by two times. The waters of Kola Bay are polluted with heavy metals, showing concentrations of iron that are nine times higher than legally allowed concentrations and copper, which show up at four times the legal limit.

The Russian Federal Service for Hydrometeorology and Environmental Monitoring (known as Rosgidromet in its Russian acronym) last year similarly reported that high levels of hydrocarbons, copper and iron in waters near Murmansk made them the dirtiest on the entire Russian continental shelf.

Current Russian environmental legislation does little to change the situation for the better. At present, the laws on the books make it cheaper for heavily polluting industry to just pay environmental fines for discharging its contaminated water directly into the bay than it would be to invest in contemporary water purification systems. 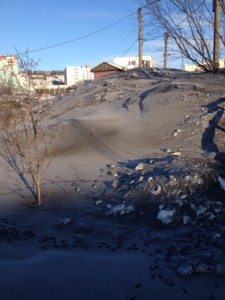 Bellona has reported before on the problems of coal dust pollution emanating from Murmansk’s Commercial Port. Annually, the Trade Port facilitates year-round loading of some 14 million tons of coal – and the volume is increasing. Coal dust becomes so prevalent with the spring thaw that coal dust in the hills surrounding Murmansk can actually be commercially produced.

Murmansk residents have for years complained to environmental authorities of coal dust sullying their windows, but little was done to improve the situation until the beginning of 2015, when central Murmansk found itself buried under an intolerable about of the black dust.

Murmansk’s environmental prosecutor filed a case against the Commercial Port that obligated it to undertake efforts to mitigate the pollution.

Kola Mining and Metallurgy Company remains the dirtiest in the region

The report also states that in 2014, the Kola Mining and Metallurgy Company (KMMC) – a daughter enterprise of the enormous Norilsk Nickel – spews more sulfur dioxide pollution into the air from its industrial cities of Nikel and Zapolayrny than it did in 2013.

The level of the annual river pollution above the town of Nikel hasn’t changed since 2013. Nickel pollution exceeds the allowed pollution limits by three times, and copper by six times. The situation at the mouth of the river also remained unchanged from the previous year measurements are available, and that level is already scathing: Annual concentrations of nickel at the mouth of the Kolos-Yoki River exceed allowable pollution limits by a staggering 42 times, and copper busts those same limits by 12 times.