Murmansk’s nuclear icebreaker port Atomflot has inked a deal with a Vladivostok shipyard to construct the Leader, a vessel of massive proportions that Moscow hopes will keep Arctic shipping lanes open year round. 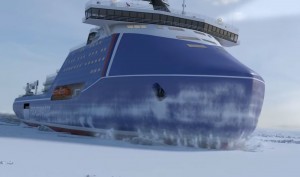 Murmansk’s nuclear icebreaker port Atomflot has inked a deal with a Vladivostok shipyard to construct the Leader, a vessel of massive proportions that Moscow hopes will keep Arctic shipping lanes open year round.

The contract, which was signed via a much-publicized video-link ceremony last week, anticipates that the new $1.6 billion vessel will be launched by 2027 with two more ships in the same class to follow in the early 2030s.

“The commissioning of this nuclear icebreaker will allow us to guarantee safe and regular operations in the eastern region of the Arctic Ocean, year-round navigation in the waters of the Northern Sea Route, and new possibilities for carving out high-latitude commercial routes,” said Mustafa Kashka, Atomflot’s general director.

The Leader has long existed as sort of engineering myth: Bigger and more streamlined than its boxy icebreaking cousins, it would have the power to chew through ice up to four meters thick at a speed of 10 knots, clearing a 50-meter-wide swathe of navigable water for ships following in its wake.

The Kremlin has made its construction the centerpiece of its expansive Artic strategy, which aims to open the Northern Sea Route – an ice-bound 6,000-kilometer shipping artery from Europe to Asia that Moscow hopes will rival the Suez Canal. But the ambitious vessel – which more resembles an oligarch’s prize yacht than an icebreaking muscle-ship – has remained something of a mirage until now.

In his statement to Rosatom, Russia’s nuclear corporation, Kashka emphasized that the Leader would be deployed primarily to hack at the ice from the east, clearing sea for tankers from Asia, the hungriest regional customer for the Arctic’s stores of liquefied natural gas.

Nearly every other nuclear icebreaker that has sailed since Soviet times has been constructed at the Baltic Shipyard in St Petersburg. The one exception, the Sevmorput, was built at the Zaliv Shipyard on Ukraine’s Black Sea coast.

Indeed, three other new-line icebreakers are currently being built at the Baltic Shipyard – the Arktika, the Ural and the Sibir. Each of these will be 130 meters long, and powered by two RITM-200 reactors with ice crushing capabilities similar to the Leader.

But the Leader’s dimensions put it in a category of its own. Billed to be more than 200 meters long, it will dwarf its forbears in Russia’s civilian nuclear fleet. Certain specifications in its hull design would also make it far more agile in the water than its older cousins.

But that’s not all. The new vessel’s space age design offers an upgrade in aesthetics over icebreakers past.

It was six years ago that the idea for the Leader emerged in the pages of a trade magazine published by Russia’s Unified Shipbuilding Corporation. The cover of the magazine’s 24th edition featured a mock-up of the sleek vessel viewed from the point of view of a landing helicopter as it steamed through fluffy islands of ice. It was ship that would have looked more at home on the Riviera.

The project lay dormant until 2017, when Rosatom, Russia’s state nuclear corporation, wrote legislation giving itself total control over the Northern Sea Route. Suddenly, the Leader was no longer just a pinup swooned over by wishful industry insiders.

According to reports in Russia’s shipbuilding trade press, the Leader vessels will come equipped with materials capable of “self-diagnosing” metal corrosion, and will further be able to “self-heal” when damage is detected.

The high expectations don’t end there. Many in Russia’s official press have championed the Leader as nothing less than the engine of the country’s economic turnaround.

Yet, even in that light, the Leader doesn’t differ much from the justifications the Russian government offers for the three other monster icebreakers it’s currently building.

Those, too, have been touted as the answer to Russia’s economic prayers, and together they are expected to shepherd convoys of liquid natural gas from northern Siberia to ports in Asia and Europe, and keep the Northern Sea Route open for traffic year round – In essence, the very same resume presented by the Leader.