The Arctic is a huge, sparsely populated region with a complex climatic conditions and containing large energy and bio-resources. It’s extremely sensitive to climatic changes but also dictates the weather patterns for the rest of the planet. What is the best way to protect it for future generations while making life within its icy expanses possible?

Published on January 23, 2018 by Charles Digges

The Arctic is a huge, sparsely populated region with a complex climatic conditions and containing large energy and bio-resources. It’s extremely sensitive to climatic changes but also dictates the weather patterns for the rest of the planet. What is the best way to protect it for future generations while making life within its icy expanses possible?

These are questions on the minds of this year’s Arctic Frontiers forum now underway in Tromsø, in northern Norway, and those who’ve come this year are hardly indifferent to the answers.

“We do not want to be saved, we do not want to remain untouched. We want to live in a developed territory,” was a common refrain heard from the members of Tromsø’s own city council. “The world of the Arctic depends not only on its resources, but also on the people living here.”

But processes underway in the Arctic, which is the area on earth most affected by climate change, affect not only the lives of those who live there, but those who live in latitudes to the south as well.

Antje Boetius, director of the Alfred Wegener Institute, people now making decisions about what goes on in the Arctic – or who are avoiding making decisions – have a colossal responsibility.

“The decisions that we are taking now will affect the life of the planet for centuries,” she told the forum. “The consequences of these decisions will be irreversible. But we already have much scientific information and we should not avoid responsibility. ”

According to Foreign Minister of Norway Ine Eriksen Soreide, the Norwegian Government is doing what it can to strike a balance between sustainable development and economic growth.

“Many view the Arctic region as a place to be protected. But we also need to develop its resources – energy resources, bio-resources,” said Soreide in her remarks. “We, and the whole world, need them.”

For Norway, the Arctic and its oceans are priority areas, she said, adding that the Norwegian government had developed an economic strategy for ocean development.

“Our maritime territory is seven times larger than our land mass,” said Soreide. “The ocean is our past, present and future. It should become an even greater source of resources for the whole world.”

According to Swedish Minister of Entrepreneurship and Innovation Mikael Damberg, climate change is happening all over the planet, but it is most keenly felt in the Arctic.

“Climate change is no longer a question of the future, it already exists, it already has an influence and, of course, will have great consequences in the future,” he said. “Do not forget that the great influence on the Arctic has on countries that are far from this region, so the solution to the issue should be global.”

In particular, Damberg cited several examples of how Sweden has reduced greenhouse gas emissions while achieving economic growth. The country has established a special climate committee and has already invested more than $700 billion in climate projects throughout the country.

“We find economic solutions for all spheres of the economy – our steel production has already reduced CO2 emissions by 10 percent, and this is not the limit,” Damberg said. “We are creating conditions for a full transition to electric vehicles. We are actively developing renewable energy – the largest wind farm in Europe is currently being built in Sweden. The Arctic can become a regional leader in such innovations. We can become a sustainable community that does not depend on fossil fuels.” 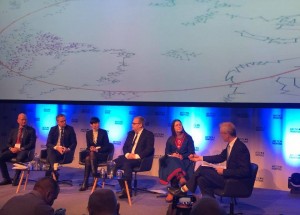 A special nod was given to the fact that, despite certain tensions, the Arctic region remains an area of international cooperation – which could be threatened by Russia.

“We must ensure that the Arctic remains a region of cooperation and peace,” said member of the European Parliament Urmas Paet. “Unfortunately, Russia is already engaged in the militarization of the Arctic. It is rebuilding military bases along its coast that haven’t been used since the end of the Cold War. ”

“Climate change in the Arctic is now associated with emissions in Asia and the United States,” he said. “It is urgently necessary to take action, since the price of inaction is already prohibitive.”

For the past few years, the Arctic Forum hasn’t provided much optimism for Arctic preservation. In 2014, Norway’s prime minister was presented with 2000 signatures from citizens of countries opposing oil development in the Arctic. In 2017, members of the Norwegian environmental group Nature and Youth issued the same appeal to the gathered Arctic dignitaries in person. The group was among those who in 2016 participated in filing suit against the Norwegian government to block if from further oil exploration in the Arctic. The government early this year found against the environmental groups.

But what is emerging at this year’s Arctic Forum is what has been made clear at the last several: None of the governments of any of the Arctic countries are giving up on exploiting the Arctic’s resources – and only future generations will be able to asses the consequences of decisions made today.