A rural area in Russia’s far northwest near Murmansk has begun tackling the problem of raising from the Arctic more than a hundred orphaned shipwrecks and other dangerous nautical debris. 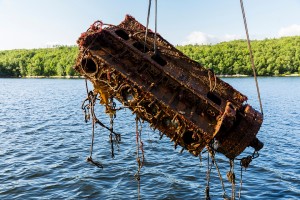 The skeleton of a boat and other nautical trash are lifted from the sea in the Murmansk Region. (Photo: gov-murman.ru)

A rural area in Russia’s far northwest near Murmansk has begun tackling the problem of raising from the Arctic more than a hundred orphaned shipwrecks and other dangerous nautical debris.

The group raised its first skeletal metal structure of an abandoned vessel out of the sea last weekend, and Sergei Donskoi, Russia’s minster of natural resources and ecology was on hand to observe.

They form a working group called “Liquidating the nuclear legacy of the Arctic,” which stems from a 2014 governmental decree on targeting contamination and other dangerous impacts on the environment in the waters surrounding the Murmansk Region.

Russia’s state nuclear waste handler RosRAO is part of the group, though the group is not involved in locating or raising any of the significant amounts of radioactive waste dumped into the Arctic by the Soviet Navy. 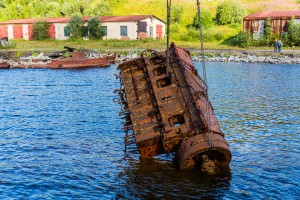 The government has given the pilot program looking for non-nuclear ships modest funding to start out – 50 million rubles, or $876,000 – but that is expected to increase dramatically once strategies for disposing of vessels and cleaning up Kola Bay water are devised.

The project leader, Vladimir Khadobin, said the project’s first stages began in 2016. By the end of that year, members of the working group charted 48 sunken boats and ships, along with 48 more languishing in shallows or along seashore.

They were then ranked by their perceived impact on Kola Bay, and by the danger they pose to other ships navigating the waterways. The first of these hazards was raised over the weekend near the town of Retinskoye.

Khadobin said this week that pulling together the machinery to raise the wrecks is complicated, and added that the program likely won’t pull up all of the wrecks surrounding the Murmansk Region, only those posing an environmental danger and impacting nautical navigation.

But the most difficult aspect of the work, said Khadobin, is locating the owners of the abandoned wrecks.

“By law, we can only raise derelict vessels,” he said. “A few of the owners, however, have been established, among them the [Russian] Ministry of Defense.”

“These sunken wrecks are an environmental hazard and 16 of the discovered metal structured present a danger to navigation,” said Murmansk Regional Governor, Marina Kovtun. “ The Kola Bay must be an example so that new investment comes to develop infrastructure. We must clean it up.”

The wreck raised near Retinskoye consisted of a rusted metal boat skeleton and part of a pontoon from a dock. Natural resouces minister Donskoi said the raising was part of a larger campaign to lift wrecks in numerous Russian regions.

Other of these projects are being undertaken in Kamchatka and the Far East, and other ports that were integral to the Soviet shipbuilding apparatus. The Murmansk Region efforts are expected to last for the next eight years.