Can Arctic countries adapt an energy strategy that lets the Arctic live?

TROMSØ – How can the Arctic be preserved for future generations when the climate is changing and temptations to drill it for oil and gas seem insurmountable? What kind of adaptive measures can be applied to transition to the so-called “blue” economy?

Published on February 2, 2017 by Anna Kireeva 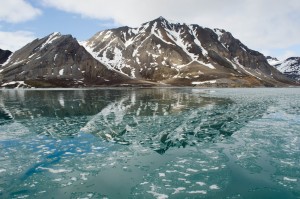 TROMSØ – How can the Arctic be preserved for future generations when the climate is changing and temptations to drill it for oil and gas seem insurmountable? What kind of adaptive measures can be applied to transition to the so-called “blue” economy?

These were some of the questions asked by those gathered at the Arctic Frontiers forum last week in Tromsø, Norway, which gathered hundreds of officials, researchers and environmentalists from Arctic countries.

Several words emerged during discussions that captured the atmosphere: the word ”climate” was hear more frequently than ”oil” and ”gas” less often than ”Trump.”

Foreign, environmental and natural resources minsters from various countries said that the attention of the world was now on the Arctic. All agreed on the importance of leaving the region in good health for the future, but emphasized a balanced approach to husbanding its resources. 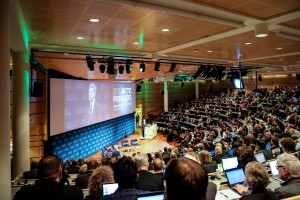 Those at the conference seemed to recognize that the present generation had saddled posterity with problems, and Norway’s Natur i Ungdom youth environmental movement spoke to this, and the group was among the first to take the floor, and they were given as much time as Norway’s prime minster, Erna Solberg.

The phrase on everyone’s lips, however, was “blue economy,” a concept meant to combat climate change and encourage economic development at the same time.

Those at the conference treated this idea as a given, but it plays a significant role in Norway’s view of the Arctic economy.

Essentially, a “blue economy” emphasizes everything the Arctic has to offer aside from oil and gas drilling and what can be done to profit from it without causing further jeopardizing the ecosystem.

It highlights the role of fisheries and alternative sources of energy that can be gained form the ocean. To preserve the Arctic, it encourages environmental shipping, such as a ban on heavy fuel oil and battery powered vessels.

Prime Minster Solberg said early in the conference her government would present a formal blue economy plan for Norway in the spring.

The ministers also reported on the effects of climate change they were already witnessing, and they were generally alarmed by how quickly occurring.

“Last year on Spitzbergen, it was 6.5 degrees hotter than the norm,” said Norwegian environmental minister Vidar Helgesen. “We expected such a rise in temperature only in the distant future.”

Margot Walhström, Sweden’s minister of foreign affairs, was worried, too.

“The last year was the warmest on record,” she said. “Climate change is already impacting our life, our society and our planet. These changes have a cumulative effect, and the new accounting doesn’t start at the beginning of the year.”

And she felt most people didn’t quite grasp climate change. Common refrains she hears are “it’s not happening yet,” “it’s a question for the future,” and a general frustration with trying to understand a complicated problem that some think won’t really change their lives.

To make progress on it, she said that not only to politicians and environmentalists have to get on the same page, but the civil society has to step up and deliver a kick as well.

Environmentalists at the conference noted that it wasn’t the gas and oil industry’s fault that it’s been profitable, but now it has become financially risky.

But representatives of Statoil, Norway’s state oil company, who came to the conference were among a minority who said the opposite, saying it was necessary to keep developing oil and gas in the Arctic.

“We take seriously that we’re living in a period of energy transformation,” said Statoil senior vice president Bjørn Otto Sverdrup. “But the world is still based on oil and gas. We believe that it’s possible to drill oil and gas in the Arctic in a balanced way, providing millions of people guarantees energy.”

He said Statoil doesn’t waste time debating climate change, and is trying to adapt and shift to new technologies to minimize negative environmental impacts. Over the past few years Statoil has invested some $2.5 billion in renewable energy sources.

“There isn’t some rainbow-colored future for climate in a world where oil and gas drilling take place in the Arctic,” said Nina Jensen of the Norwegian World Wildlife Fund. “There’s just one or the other.”