TROMSØ¬—Bellona has called for a ban on the use of heavy fuel oils in shipping in the Arctic, and said the industry should apply best available technologies to offset costs.

Published on February 1, 2017 by Anna Kireeva 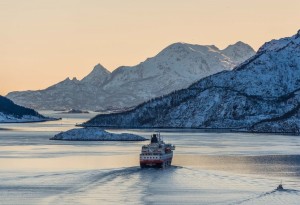 TROMSØ­—Bellona has called for a ban on the use of heavy fuel oils in shipping in the Arctic, and said the industry should apply best available technologies to offset costs.

The European Union echoed the sentiment on Friday, voting to adopt a resolution against heavy fuel oils in Arctic shipping lanes.

According to Hallstein Havåg, Bellona’s policy and research director, who spoke at a seminar in Tromsø, 44 percent of cargo and cruise ships operating in the Arctic use heavy fuel oil.

“There will only be more ships in the Arctic, so it’s time to form a coalition,” Havåg said. ”Say no to heavy fuel oils and support a balanced Arctic future.”

The seminar conference was arranged by Bellona, the European Climate Foundation and the Hurtigruten Norwegian cruise line, and took place at the Arctic Frontiers conference.

Havåg presented several reasons for putting a moratorium on heavy fuel oil in the Arctic, including the risk of accidents and oil spills in bad weather conditions, lack of infrastructure in the arctic to deal with those, and the delicate Arctic ecosystem itself, which could hardly sustain such a blow.

He also cited the problem of soot accumulating on Arctic ice cover, which comes from shipping and accelerates ice melt.

“Best available technologies must be used in the Arctic,” said Havåg. ”Right now, that’s bio-condensed natural gas, and hybrid and electric technology. There are others, but it’s important to take the first step – to ban the dirtiest and cheapest fuel – shipping companies must test and apply new technologies.” 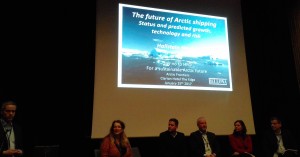 Sigurd Enge, Bellona’s manager for shipping, marine and Arctic issues, said that the Polar Code came into force on January 1, but that it contains a significant omission:

“It doesn’t contain an official ban on using heavy fuel oil in shipping in the Arctic,” he said. “Just advice not to use it.”

Creating a coalition, and the fact that more and more companies are voluntarily signing Arctic obligations and voluntarily swearing off heavy fuel oil could become levers of influence with the International Maritime Organization.

The Association of Arctic Cruise Operators, which encompasses 60 companies, has pledged not to use heavy fuel oil in the Arctic.

As shipping there is on the increase, it’s especially important to adopt regulation now, otherwise the shift to greener technology will take longer and be more expensive, Enge said.

“Banning the use of heavy fuel oil to power Arctic shipping will not only minimize the risk of spills, but will also help reduce climate-warming emissions in the region”, said Wolff, whose organization is a member of the Clean Arctic Alliance.

“The Clean Arctic Alliance is calling on the international community to sign up to the Arctic Commitment, so that with one voice, we can urge the IMO to phase out HFO from Arctic waters,” he said.

Daniel Skjeldam, the director of the Hurtigruten cruise line, said that none of the ships in his company use heavy fuel oil even though it’s far more expensive not to do so. He thought it strange that there is still no regulation against using it in the Arctic, and called for other tour operators to eschew the cheap, dirty fuel.

“In Norway, the tourist sphere is even bigger than the fishing industry,” he said. “For the first time, profits from tourism in Spitzbergen are bigger than from coal mining. It’s a developing sector of the economy.”

Skjeldam said the Hurtigruten line was making the transition to best available technologies. He said the company would in over the next year or two being sailing two battery-operated ships. He said developments in battery technology where encouraging.

“These will be the two most ecological non-hazardous cruise ships in the world,” said Skjeldam. “Our sphere of business is responsible for pollution in the Arctic,” he said. “It must be part of the solution. We hope other companies will follow our example.”