MURMANSK – The Russian government in 2015 undertook the development of a program to develop the Northern Sea Route across its Arctic Coast, and access to the project is closed to public for defense reasons.

Published on April 14, 2016 by Anna Kireeva, translated by Charles Digges 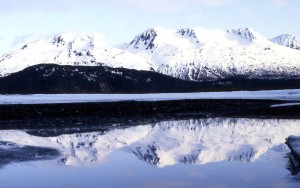 MURMANSK – The Russian government in 2015 undertook the development of a program to develop the Northern Sea Route across its Arctic Coast, and access to the project is closed to public for defense reasons.

Models to make the waterway more attractive to shippers are likewise secret, as Russian Arctic experts insist on broad public discussion of the project.

The sixth international conference on “Logistics in the Arctic” was held this week in Murmansk, which was hosted Murmanshelf, a contracting firm that cooperates with Norway’s state oil company Statoil to establish infrastructure for hydrocarbon exploration in the Arctic.

Planning for heavy traffic in the Arctic

Mikhail Grigoriev, a member of the Scientific Council of Russia’s Security Council, and the Director of Gecon, and oil industry consultancy firm, told the conference that, “the Northern Sea Transport Corridor, which beyond the Northern Sea Route, includes the Barents, White, Pechora and Bering seas, is a national transport artery that successfully fulfills national transport needs.” 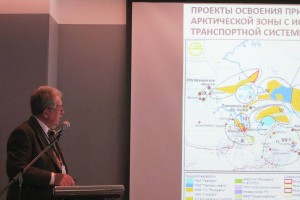 “It facilitates northern shipping, the activities of mining and oil and gas complex, infrastructure development for new industries, export of mineral ores, and solved other issues,” continued Grigoriev.

At a minimum, experts expect that in the next 10 years, there will be an explosion of traffic on the Northern Sea Transport Corridor of up to 55 million tons.

The great bulk of this tonnage in the Arctic, noted the Murmansk forum, would consist of domestic natural resources development and hydrocarbon delivery, primarily oil, gas condensate, coal, ore concentrates and metals. Clearly, the government is counting on the route to defibrillate Russia’s sliding oil industry.

The conference took that into account, saying they didn’t expect long haul traffic from the Atlantic to the Asian Pacific to top 2 million tons.

This pales in comparison to tonnage delivered through the Suez Canal, the route’s main competitor, which in 2014 saw passage of 822.3 million tons of cargo to the Northern Sea Transport Corridor’s 274,000 tons.

The previous year, the Northern Sea Transport Corridor saw the passage of 1.3 million tons of cargo, so it’s 2014 figures show a clear drop off in its popularity because of heavy tolls, unpredictable weather and mandatory icebreaker escorts.

Customers are apparently unimpressed by the two weeks they shave off the Rotterdam-East Asia route by picking the Northern Sea Transport Corridor over the Suez, whose weather is far more predictable.

The infrastructure upgrades approved by Moscow in 2015 included facilitating safe traffic passage, coordinating the activities of ships and vessels, and the Northern Military Fleet, northern transport for northerly Russian provinces, and protecting the environment from environmental contamination. The plan also envisioned reliable transit for raw hydrocarbons from field along the Arctic Shelf, according the Russian Government’s official website (in Russian).

The time frame for this enormous undertaking was set for 2015-2030.

“The document for the ‘Integrated Plan to Develop the Northern Sea Route,’ remains unpublished because it contains restricted information,” said the government’s website.

However, the Russian Government’s analytic center, in concert with America’s McKinsey & Company, an international management consulting firm, are working out competitive models for the Northern Sea Route.

“Earlier in similar circumstances we published everything with the exception of the closed sections,” a scientific analyst with Russia’s Security Council told Bellona.

“I can’t understand why the civilian sections have been secreted for purposes of pubic discussion,” said the source.

“Why are they allowing an American firm that’s supposed to build models in close coordination with the confirmed government plan for integrated development, such close scrutiny of these documents, and shutting out Russian companies who have the corresponding experience?” he said, adding he was confused.

For his part, Grigoriev accused developers – American and Russian – of incompetence, of not understanding the essence of the project, and numerous factual errors. For example, the developers consider that the Dolginsky oil field will produce up to 7 million tons by 2020, Russia’s oil delivery. In fact, the field is not being developed, and wont be until 2030.

Oil from the Belokamenka tanker, which is being used as a single buoy transfer complex in Kola Gulf, hasn’t been offloaded since January of 2014, despite assurances by developers that it oil transfers are ongoing. Such mistakes by the developers go on for several pages. 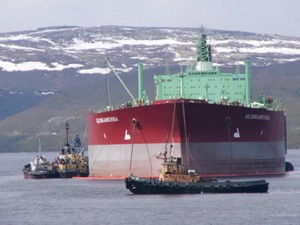 “The presented suggestions demonstrated the absolute denseness of the developers to the essence of the situation,” Grigoriev told Bellona. “ Most dangerous is that the government will build its planning around the basis of this model. Then, all of this will turn into concrete decisions that have an impact on the life of the enterprises in the region.”

“We support wide public discussion of projects for the competitive development of the Northern Sea Route, about which we are holding discussions at many levels,” Grigory Straty, deputy governor of the Murmansk Region, said.