Murmansk’s ecological problems and their solutions, as presented by Bellona

MURMANSK – Bellona Murmansk held a day of lectures to local institutes of higher learning on the regions environmental problems – and their solutions – on the eve of International Pollution Control Day on December 2nd. 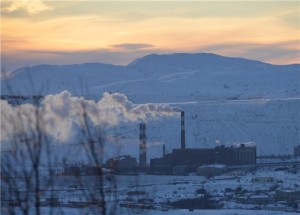 MURMANSK – Bellona Murmansk held a day of lectures to local institutes of higher learning on the regions environmental problems – and their solutions – on the eve of International Pollution Control Day on December 2nd.

Last year, “Bellona-Murmansk” together with other environmental organizations in the region sent an appeal Murmansk Governor Marina Kovtun.

In their appeal, they called on Kovtun to support organizing and holding further the annual International Pollution Control Day event and highlighting the “Zero Negative Impact on the Environment” action.

The action is aimed at short-term and voluntary full or partial suspension of industrial activities that have a negatively impact the environment.

The proposal from NGOs was intended to appeal to industry to reduce its polluting emissions into the environment.

December 2nd was not chosen by chance – a lot of the adverse weather conditions that pave the way for pollution in Murmansk fall in winter. It was also on, December 2 1984, that the Union Carbide pesticide factory in Bhopal, India sprung al leak, killing more than 2,500 people and exposing over 500,000 people to the lethal methyl isocynanate gas and other chemicals.

Numerous countries around the world honor December 2 in honor of those who died in the Bhopal tragedy, considered the worst industrial accident in history.

The Murmansk Ministry of Ecology and Natural Resources chose to grant the appeal of the environmental organizations. It sent the appeal on to industrial centers within the Murmansk Region, suggesting they do their part and lower their harmful emissions for at least a day.

During the meeting with students of the Murmansk International Institute of Business Education, issues such as nuclear and radiation safety, the development of renewable energy in the Murmansk region, the “black soot” or coal dust were also raised. Industrial pollution caused primarily by the smelting activities at the Kola Mining and Metallurgy Combine (KMMC) received special focus. The KMMC is a daughter company of Norilsk Nikel, which produces a third of the nickel used worldwide.

“The activities of these companies have a serious negative impact on the ecological state of the Murmansk region,” said Andrei Zolotkov, director of Bellona Murmansk. “Anyone who has ever visited Murmansk by car, both from Norway or from the St. Petersburg, has seen the so-called lunar landscapes – scorched wasteland with sparse, yet miraculously surviving shrubbery.”

“This is the sad result of sulfur dioxide emissions from the smelting facilities in the [Kola Peninsula industrial] cities of Polyarny, Monchegorsk and Nickel settlement,” he said.

The students were interested in the public health threat posed by sulfur dioxide emissions, and how emissions in Nikel and Monchegorsk Polyarny could affect Murmansk. They also wanted to know what needs to be done to improve the situation.

Bellona-Murmansk reiterated that it has never demanded nor will it ever demand the closure of KMMC facilities on the Kola Peninsula.

“We insist on modernization of production, which is now going too slowly. It is clear that the potential for reducing emissions from the use of local modernization projects is virtually exhausted,” Said Belllona Murmansk’s Anna Kireeva. “ Achieving significant emissions reductions in the future can only take place through a revolutionary approach, by changing the technology and building new capacity, and it’s expensive.”

“But we have no doubt,” she continued “that one of the richest companies in the world can not afford to clean up after itself,” she added.

In April 2014, in celebration of the 20th anniversary of the activities of Bellona in the Murmansk region, a number of the organization’s members drove from Kirkenes to Murmansk in a Tesla electric car.

Bellona parks its Tesla near the industrial facilities in Nikel on the Kola Peninsula. (Photo: Bellona)

The mission was to show how to solve environmental problems that Bellona has struggled with for decades. A key component to the Tesla’s battery is nickel – which the KMMC produces in vast quantities.

Tesla plans to build an enormous factory to produce its batteries. The new facility will over the course of three or four years double the number of batteries for electric cars worldwide – which would make Tesla the planets largest nickel consumer.

But Tesla, which makes cars that have no emissions, buys its raw materials from companies that leave a minimal ecological footprint.

This means that whoever is selling Tesla its nicjel has to be a great deal cleaner than Norilsk Nikel and its associated facilities on the Kola Peninsula could make a hot buck as a potential supplier of Tesla’s nickel needs.

But Norilsk Nikel and the KMMC are far from using the most environmentally friendly technology – which is causing irreparable damage to vast swathes of Arctic territory from the Murmansk region to northern Scandinavia with huge emissions of heavy metals, sulfur dioxide and dust.

Bellona Murmansk told the students it will continue to work on their behalf.

“Our task as environmental NGOs is to contribute to solving environmental problems, and we will continue to actively engage in this”, – said Zolotkov.