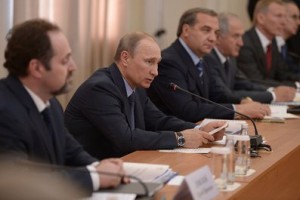 A proposed bill on the floor of the Russian Duma that would do away with the obligatory legal process known as a State Environmental expertise – a regulation allowing public input on large-scale and potentially damaging construction projects and access to information about their possible effects on ecology.

According to information obtained by Bellona, the bill is being sponsored by five or six Duma deputies who are fiercely lobbying for oil industry privileges to drill the sensitive Arctic ecosystem, an environmental time bomb that has entrenched itself as a key cash cow in Russian economic planning.

The Russian government under Vladimir Putin has never been fond of the environmental expertise – or more simply public environmental impact study system – and recent years have seen public information made only narrowly available to small sectors of the public, whose opinion is summarily dismissed.

This has been seen time and again in connection with megaprojects like the 2014 Sochi Olympics and construction or operating license extensions plans for nuclear reactors. Government agencies and contractors responsible for furnishing such information often refuse to make it available on the internet, displaying it only in town halls where projects are taking place, requiring environmentalists and concerned citizens frequently to travel hundreds of kilometers to take part in discussions and read relevant environmental materials.

But for the time being, Putin is anxious to distance himself from the bill.

The Russian president was confronted by a representative of the World Wildlife Fund (WWF) during an official meeting yesterday in St. Petersburg, where his comments appear to deflect blame on Igor Sechin, head of Russia’s giant state oil monopoly Rosneft, for the appearance of the controversial bill on the Duma floor.

According to the Russian language Baltinfo news agency, Alexei Knizhnikov, head of the WWF’s program coordinator for oil project, complained directly to Putin about bill.

Putin, the news agency reported, responded by saying the bill had not emanated from the Russian government’s executive branch, and said it had appeared on the Duma floor as the result of “oil company lobbying.”

“Ask Sechin if he isn’t acting as a partisan there,” Putin told Knizhnikov in front of Sechin, who was also present at the St. Petersburg meeting on Arctic projects. Sechin immediately denied the accusation, deferentially telling Putin, “We don’t do anything without your team. Much less introduce such a bill.”

The authors of the bill, which would amend Russia’s 2002 law “On environmental protection,” say that the requirement of an environmental expertise should be supplanted by a state expertise on engineering documents for a given project as provided for by existing municipal planning codes.

This would mean that projects planned for realization on specially protected natural lands, on the continental shelf – where the bulk of current oil aspirations are planned – as well as waste and garbage treatment facilities would no longer be required to pass through the public environmental expertise process – hence cutting off all public access and input on such future construction plans.

Alexander Niktin, Chairman of the St. Petersburg-based Environmental and Rights Center (ERC) Bellona, said the topic of this bill had been raised vociferously at the organizations recent conference, “The Environment in Russia: The Right To Life,” which concluded last week.

Foggy origins of the bill

According to Nikitin, the issue of the new bill is slightly more clouded than it appears at first glance. Niktin said he was first made aware of the bill by Russian state nuclear corporation Rosatom.

However, Nikitin explained that another bill was introduced on the Duma floor at the same time by a group of five or six deputies which aims to do away with the process of the state environmental expertise altogether. Nikitin underscored the importance of not confusing the two bill projects, one of which is legitimate, and one of which is directed by shills from the oil industry who want to ride roughshod over any public input or possible opposition to Russian and foreign partnerships to drill the Arctic.

“How likely it is that the deputies’ bill will receive any support is at this moment, difficult to say,” said Niktin. Though Putin’s public distancing of his administration from the deputies’ bill, and publicly forcing Sechin into a squirming position of denial, doesn’t bode well for its future.

Nikitin said that the WWF’s Khmeleyeva, as well as a team of lawyers from Greenpeace are combing over the bills and involved in tweaking the one introduced by the Ministry of Natural Resources.

It’s been only a recent development that Russia has, in fact, begun drilling oil in the Arctic. It sent a 70,000-ton shipment of sub-standard ARCO oil from the controversial Gazprom-owned Prirazlomnaya Platform to France’s Total in late April.

Earlier this week, however, the Barents Observer news portal in Kirkenes reported that the Prirazlomnaya rig, having achieved the publicity stunt of producing the poor qualify oil, is now holding a tender for its modernization – a tacit confession that the rig, which was assembled in a slap-dash manner from older rig parts 16 years ago, is not up to snuff.

The rig has been a lightning rod for environmental protest and concern.

In September 2013, 28 Greenpeace activists and 2 journalists were detained by the Russian Coast Guard and held for four months for trying to board the Prirazlomnaya and hang protest banners from it. They were first accused of piracy, later reduced to hooliganism, and were eventually freed without trial under a general amnesty issued by Putin in December.