A Russian tanker loaded with diesel fuel, which last week was crippled on the Northern Sea Route after colliding with an ice floe, remains adrift at sea in icy waters despite enormous resources devoted to escorting the Russian Navy’s flagship battle cruiser through the same territory.

Published on September 12, 2013 by Charles Digges 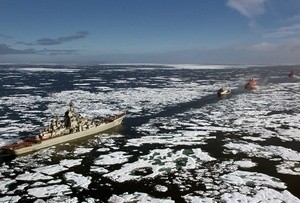 It remains unclear from numerous reports whether help is finally on the way for the hobbled Nordvik cruiser, which is currently drifting in the area of the Maitsen Straight, where on September 4, its hull was damaged by ice, threatening to spill tons of diesel fuel into the fragile Arctic ecosystem.

The ship’s rescue – and the aversion of a possible environmental disaster – would require the assistance of icebreakers to clear its path back to port.

A report from the Kirkeness-bases Barents Observer news portal today indicated that the Russian’ Navy’s flagship battle cruiser, the Petr Veliky, or Peter the Great, accompanied by a flotilla of 10 ships – including four nuclear ice breakers – are steaming through the Maitsen Straight.

Among the nuclear icebreakers in the Petr Velikhy’s entourage are the 50 Let Pobedy (50 years; Victory), the Taimyr, the Vaygach and the Yamal.

An email received Thursday by Bellona from the Greenarctic group, which has visual confirmation of the whereabouts of all the ships, indicated that at least two of the ice breakers were changing course, apparently toward the Norvik, and that many other vessels seemed to be making their way toward the drifting freighter as well.

According to the email from Greenarctic, written the group observed that the Taymyr and Vaygach had made U-turns from their present west to east courses in an apparent effort to join the Boris Vilkitskiy tanker, which is already arrived in the area of the Nordvik.

But Greenarctic was cautious about drawing conclusions that this was a rescue effort, reporting “So far it may be too early to draw conclusions, but the sudden “movement” in that area over the last 24 hours is a bit odd” and said further they would “keep an eye on it.”

The Barents Observer posted video footage Wednesday broadcast on the Russian Ministry of Defense’s TV Zvezda, showing the Northern Fleet entourage as it made its way across the Northern Sea Route.

No mention was made in the Russian language report that any ships from the flotilla were being diverted to help the Nordvik.

If, in fact, the new ship movements reported by the Greenarctic group do not indicate a rescue mission, Bellona advisor Sigurd Enge, who specialized in Arctic shipping and environmental matters, is appalled.

”Russian ships violate all manner of regulations regularly,” he said. “This ship never should have been permitted in icy conditions, violating regulations even further.”

Enge said of the lavish attention devoted to the Petr Veliky’s voyage through the Northern Sea Route, and the vast military resources it was diverting from a rescue mission, that, “This is reality, not a public relations pagent.”

The 138-meter-long Bulgarian-built Nordvik was struck by ice while sailing the Matisen Strait to the north of the Taimyr Peninsula on a course for Murmansk. The 30-year-old vessel, which was loaded with diesel fuel, struck an ice floe and started taking in water, the Barents Observer reported.

News of the ice collision stirred loose an avalanche of criticism from the Russian Seafarers Union, who released a statement (in Russian) saying the Nordvik should never have been sailing in icy conditions.

According to the Barents Observer, the Nordvik is a so-called ice class 1 tanker, certifying for use in only “light” ice conditions. On September 4, the North Sea Route Administration said the ice conditions in the area of the Matisen Strait were “medium.”

The Seafarers Union laid the blame for the accident, and putting the vessel in a position to compromise the Arctic ecosystem, at the feet of the ship owner, the Khatanga Commercial Port.

“The Katanga Commercial Port’s […] decision to sent the vessel along the Northern Sea Route is rather stranger, to say the least,” read the statement, and went on to say the ice collision was the result of “incompetent management.”

“[The Septemer 4] accident was a direct threat to the lives of sailors and the ecology of the Arctic” the statement continued. “Vessels like that should not be sailing on [Northern Sea Route] simply because they are not capable of withstanding the ice conditions.”

The Seafarer’s Union also used its statement to make a point Bellona’s Enge has emphasized time and again – that the race to develop the Northern Sea Route is haphazard at best given the lack of critical infrastructure to deal with emergencies at sea, much less the remediation of ecological disasters.

“We cannot forget the environment,” read the Union’s statement. “A huge amount of diesel fuel could have leaked out into the sea. Who would be there to clean it up is unclear.”