The European Parliament calls for the International Maritime Organization (IMO) to ban the use of heavy fuel oil on ships in Arctic waters in order to prevent major environmental damages. Behind lies the threat of refusing access to European harbours for ships carrying heavy fuel oil, if the UN does not follow up.

Published on January 28, 2011 by Ruth Lothe, translated by Lorelei Limousin 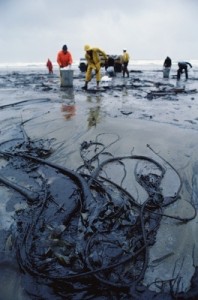 “A sustainable EU policy for the High North” was the headline of the resolution adopted on January 20th by the European Parliament. It puts sustainability as a prerequisite of the EU’s future Arctic policy.

The second point proposes a ban on the use of heavy fuel oil for vessels traveling in the Arctic, in the same way as heavy oil will be banned in the Antarctic, on August 1st, 2011.

The third relevant point encourages the European Commission to put forward proposals on a strict regime: The EU should threaten to refuse in its harbours vessels with heavy fuel oil on board or which would cause high soot emissions. These rules would apply to all vessels calling at European ports, prior to or after trips in Arctic waters. The European Parliament hopes that this will make the IMO tackle the issue seriously.

The Arctic is particularly vulnerable

“Heavy oil is the biggest environmental problem caused by shipping, because of its detrimental impact when burned and accidentally discharged into the sea,” says Marius Dalen, adviser at The Bellona Foundation.

The sticky bunker oil has a worse environmental impact than any other oil when it is released as a result of grounding or leakage. It is viscous and does not dissolve in water. As a result, its impact on beaches and seabirds is much more detrimental than that of lighter compounds such as marine diesel. In addition, the use of heavy fuel oil brings on worse air pollution, including soot emissions.

An accidental discharge would be particularly serious in the Arctic as nature is more vulnerable to oil spills. Besides, it is a much greater challenge to clean up oil spills in the Arctic. The ice conditions, darkness, poor visibility, the bad weather and the long distances are some of the factors that make effective oil spill response impossible most of the year.

Air pollution from heavy fuel oil is soot (black carbon) in its particle form, e.g. NOx, SOx and CO₂. Soot settles on ice and snow and slowly blackens the large white surfaces. This absorbs more energy from sunlight and accelerates the melting of snow and ice, increasing the dark sea surface, which in turn further increases absorption of sun energy and the melting of snow and ice. Soot emissions therefore contribute to climate change in the high north and to the global climate change by affecting the ocean currents that largely determine the climate we have today.

Large cuts in emissions of soot and sulfur oxides are possible if ships opt for cleaner fuels – mainly diesel and natural gas. Natural gas will also reduce NOx emissions by 80% and CO₂ emissions by about 20% compared to conventional fuels.

Pressure on the Commission

The amendments on heavy oil and soot are the result of Bellona’s lobbying in Brussels and could be considered as a major victory if they are enforced.

– This is just a first victory, now we have to push the Commission in its response to the report to say how it can follow up on these points at the IMO, says Eivind Hoff, head of Bellona Europa.