Using REPowerEU to its full potential

On the 8th March 2022, the EU Commission published REPowerEU, a strategy to cope with Europe’s dependency on fossil fuels and in particular Russian gas. The EU must thus maximise its efforts finally moving towards both climate goals and energy security. Our assessment shows that the current strategy is ineffective at reducing gas use. By prioritising technologies that are inefficient at displacing gas, the European Union is missing the opportunity to free itself from Russian gas quickly and cheaply. 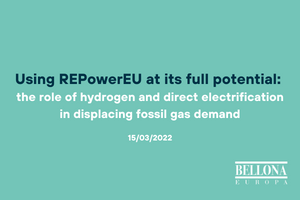 Last week, the Commission published REPowerEU, a strategy to cope with Europe’s dependency on fossil fuels and in particular Russian gas [1]. Delayed efforts to address the EU fossil dependency and shortsighted reaction after the Russian annexation of Crimea crisis in 2014 have left the EU in the current situation which may lead to a shortage of fossil gas. The EU must thus maximise its efforts, finally moving towards both climate goals and energy security.

This Bellona assessment shows that the current strategy is ineffective at reducing gas use. By prioritising technologies that are inefficient at displacing gas, the European Union is missing the opportunity to free itself from Russian gas quickly and cheaply.  At the same time, the EU continues to finance the Russian regime through its fossil imports, which on the 15th of March had reached over EUR 12 billion since the start of the invasion of Ukraine on the 24th of February [2].

Reducing fossil gas dependency will require great investments into renewable capacity deployment. How we use that electricity will give very different outcomes in terms of our dependency on Russian gas, and on fossil fuels in general.

We have already highlighted the importance of targeting investments to the most efficient use of renewables under the Sustainable Finance Taxonomy. The proposal essentially risks gas power plants becoming black holes using up large amounts of renewable energy that would be more efficiently used elsewhere. Unfortunately, it is unfortunately necessary to issue this warning again, but for REPowerEU – for it to reach its full potential while avoiding opportunity costs.

Using 1 TWh of electricity to heat homes with heat pumps [3] instead of gas boilers displaces three times more gas than using it to produce hydrogen for electricity production. Switching off gas-fired power plants to power the grid through renewables is also a much more efficient solution than turning this electricity into hydrogen for power production. How effectively we use electricity will de facto determine how easily we move away from fossil gas dependency in the upcoming decade. 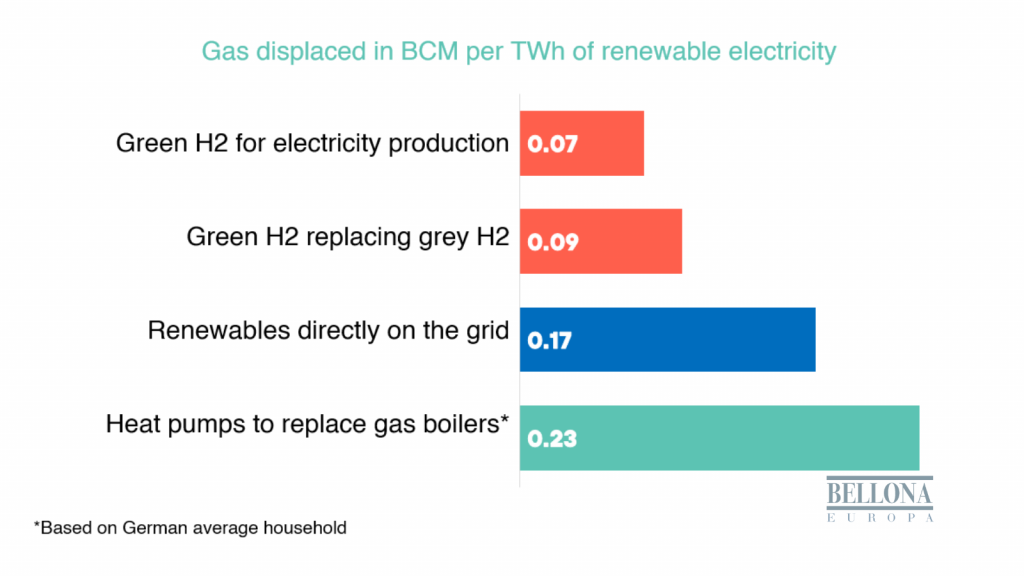 REPowerEU aims to nearly triple current installed wind and PV capacity in the EU, reaching 980 GW of installed wind and solar PV capacity combined. This entails installing 280 GW of PV and 260 GW of wind, as forecasted by FitFor55, and deploying an additional 80 GW dedicated to renewable hydrogen production [4].

Overall, this additional capacity will produce more than 1000 TWh of renewable electricity [5] —the combined demand of France and Germany—that the EU will need to decide how to use to maximise its interests.

REPowerEU increases the EU renewable ambitions only by a small part (80GW). If the increase alone was to be dedicated to hydrogen production, only 2.8 Mt of hydrogen could be produced. 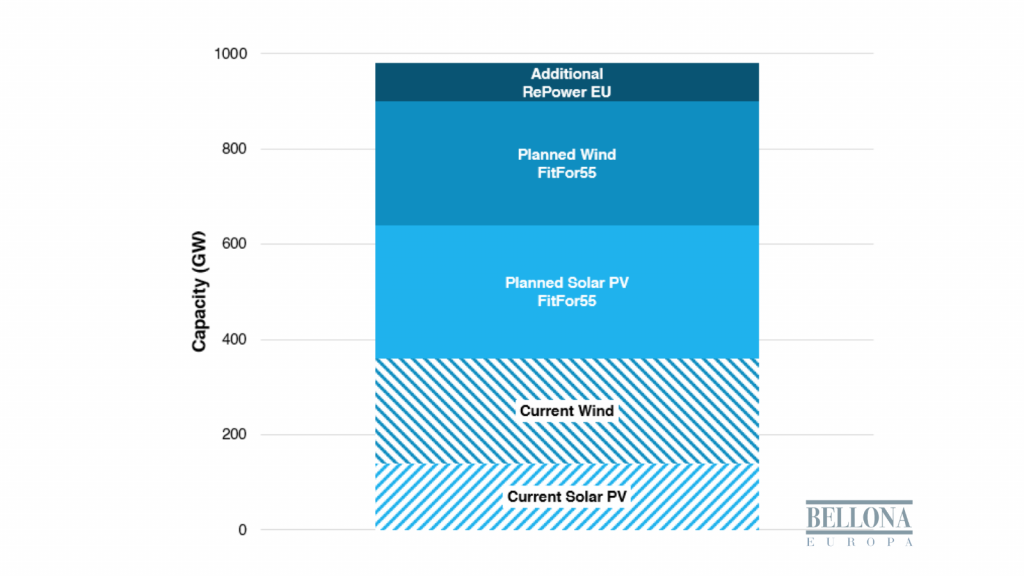 When thinking of how this new electricity will be used, three potential scenarios emerge 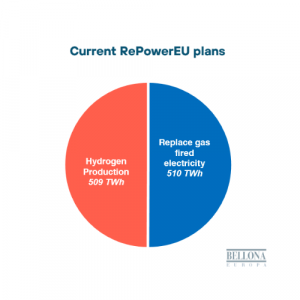 Maximise gas phase-out: this scenario’s prime objective is to reduce EU gas dependency. Here we assume that once all the demand for fossil gas-fired electricity has been substituted in the grid by newly deployed renewable electricity generation, the rest will be used to power heat pumps to heat buildings instead of the currently used gas boilers. 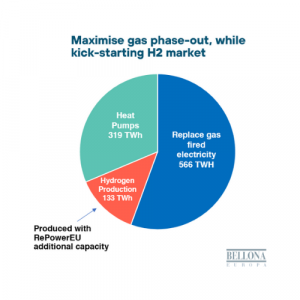 Maximise gas phase-out, while kick-starting H2 market: this scenario assumes that the 80 GW of capacity will be dedicated to producing 2.8 Mt of hydrogen, while the rest will be used first to decarbonise the grid and then to heat buildings through heat pumps.

Each of these scenarios provides a different result in terms of fossil gas displacement potential. 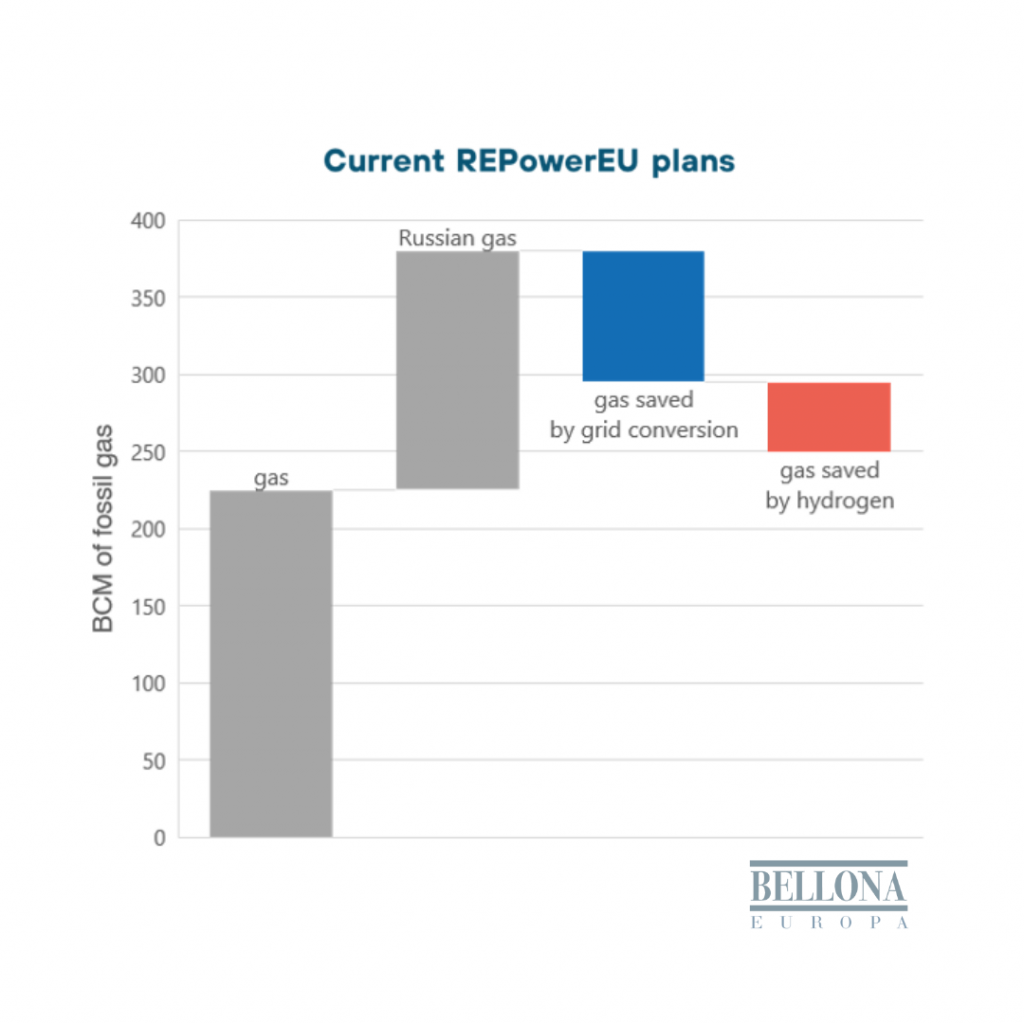 REPowerEU pushes for significant hydrogen production. However, due to the low efficiency of hydrogen in displacing gas, such a strategy will leave the EU still dependent on 24 BCM of fossil gas imports from Russia alone. 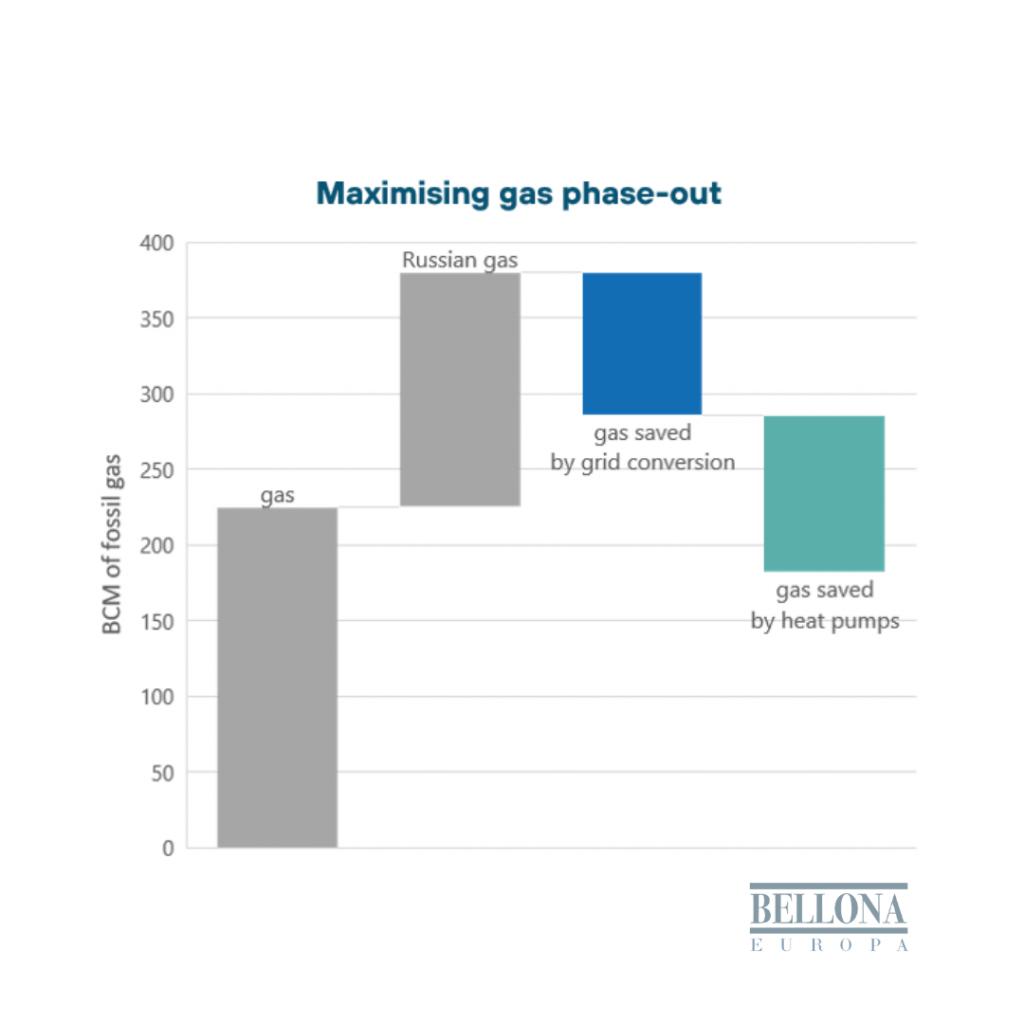 Heat pumps are the most efficient solution to reduce gas dependency

Powering down gas electricity generation and dedicating all the remaining electricity for heating buildings through heat pumps displaces the most gas. It would in fact completely free the EU from Russian gas imports and avoid the consumption of another 43BCM of fossil gas. 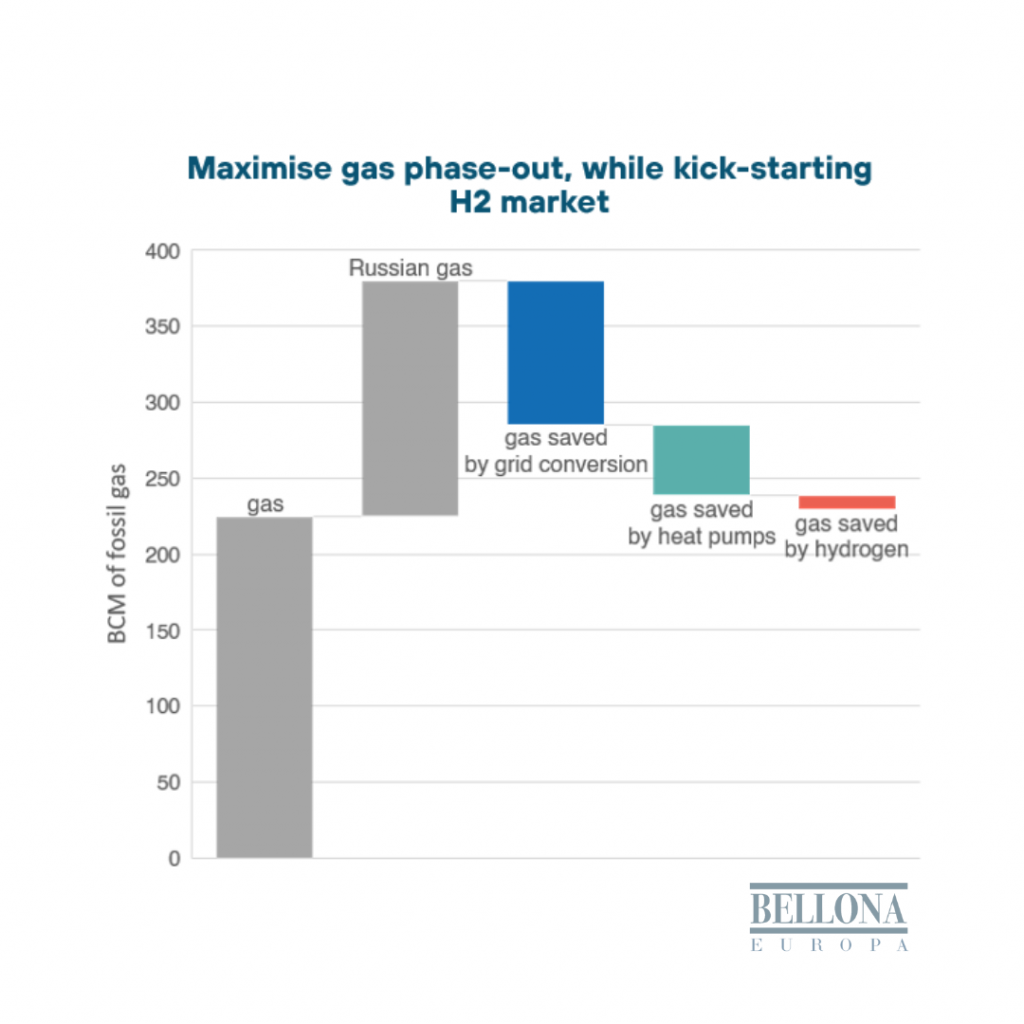 Find the PDF of the analysis here.

[1] All energy statistics data are sourced either from EuroStat 2020 – Energy Statistics, or IEA [2]EU Member State spending on Russian fossil fuels (beyond-coal.eu) [3] Heat Pumps – Assuming an average yearly heat pump consumption per household in Germany of 4993 kWh Schlemminger et al, 2022, Dataset on electrical single-family house and heat pump load profiles in Germany [4] Since no detail was provided on the additional 80 GW of capacity, we assumed that they will be equally split between wind and solar PV. [5] We assumed 27% capacity factor for wind and 11% for PV (based on current German data). [6] We assumed H2 electrolysis efficiency at 70% [7] We assumed Gas Power (CCGT) efficiency at 60%